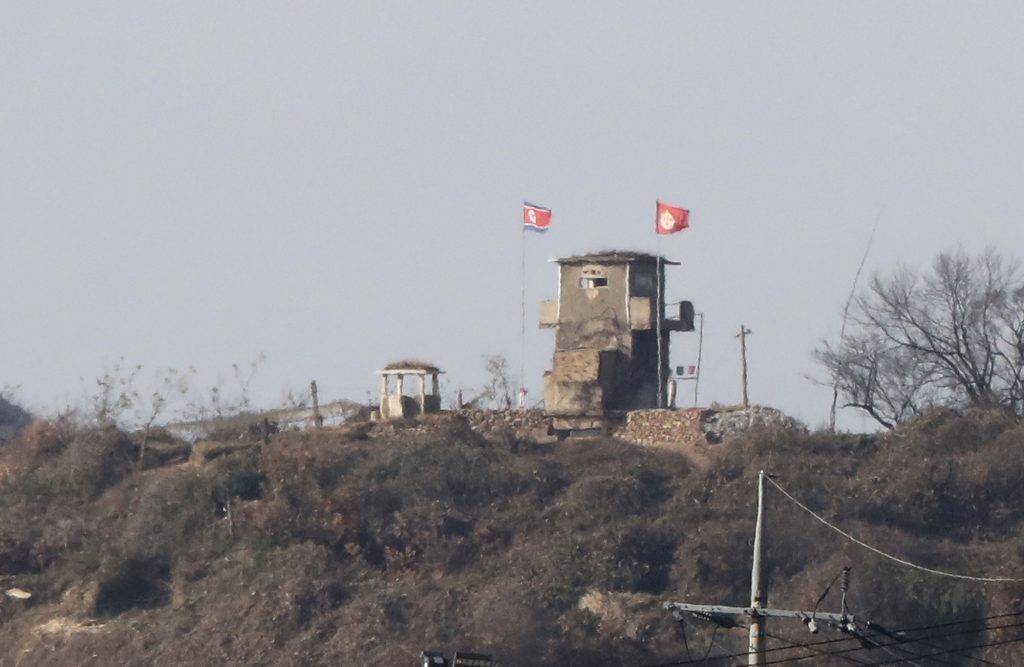 The last North Korean to cross this heavily militarized border was shot by his own comrades, and barely escaped with his life.

But when a hefty man proudly sporting lapel pins with the beaming faces of late North Korean leaders Kim Il Sung and Kim Jong Il led a delegation of about 20 North Korean officials over the tense border dividing the two Koreas on Tuesday, they did so to praise from both countries.

The visit – part of the first official talks between the two Koreas in two years – was in stark contrast to the past year of spiraling tensions, punctuated by the dramatic defection of a North Korean soldier in November. It was just meters away from where the diplomatic delegations sipped cups of red ginseng tea on Tuesday.

Arriving in only Western-style business suits despite sub-zero weather and snow piled on the ground, the head of the North Korean delegation referenced the increased tensions over Pyongyang’s nuclear weapons program.

“This winter has seen more snowstorms than ever, and rivers and mountains across the country are frozen,” said Ri Son Gwon, chairman of the North’s Committee for the Peaceful Reunification of the Fatherland.

“It would not be an exaggeration to say that inter-Korean ties were even more frozen, but public yearning for improved relations was so strong that today’s precious event was brought about,” he quipped.

“We came to this meeting with the thought of giving our brethren, who have high hopes for this dialogue, invaluable results as the first present of the year,” he continued in opening remarks, as his officials opened brown paper folders.

Despite skepticism from allies in the United States and Japan, officials in South Korea hope the talks lead to more than just friendly photo ops, including substantive improvements in relations between Seoul and Pyongyang.

Just before Seoul’s delegation drove into the demilitarized zone, some 20 South Koreans were seen holding up a banner that read: “We wish the success of the high-ranking inter-Korean talks.” One man was spotted waving a flag with a unified Korean peninsula.

The rare meeting comes after a year of ramped-up North Korean missile launches, its sixth and most powerful nuclear test, and an exchange of threats and insults between North Korean leader Kim Jong Un and President Donald Trump, which raised fears of a fresh conflict on the Korean Peninsula.

“There is so much focus on our high-ranking talks today, and considering the high hopes, we were thinking about opening up these talks to the general public,” Ri suggested. “I see many reporters here, how would you feel if we just opened this up?”

Unification Minister Cho Myoung-gyon said it would be better to stick to practice and brief reporters as often as possible.

Cameras and microphones installed in the meeting rooms usually enable government officials to monitor the meetings in real time.

South Korean President Moon Jae-in is being kept up to date on all developments as they occur, according to a Blue House spokesman, but he declined to confirm if Moon is monitoring the talks in real-time. “It’s impossible for Moon to be glued to a screen all day anyway. He’s got his own schedule.”

After two meetings in the morning, Ri and his team returned over the border to lunch at Tongilgak, the North’s building in the truce village of Panmunjom.

The two Koreas usually do not eat together during inter-Korean talks as these breaks are used as opportunities for officials to go over what was discussed and also consult with other government authorities in Seoul and Pyongyang, respectively.

Seoul also proposed a number of other measures designed to reduce tensions between the two countries. But Chun cautioned that Tuesday’s meeting would only be the beginning.

“Starting is half the trip, but we can’t expect to be full with just the first spoonful,” he said.