World N. Korea Says It Will Not Discuss Nuclear Arms in Talks With South
World 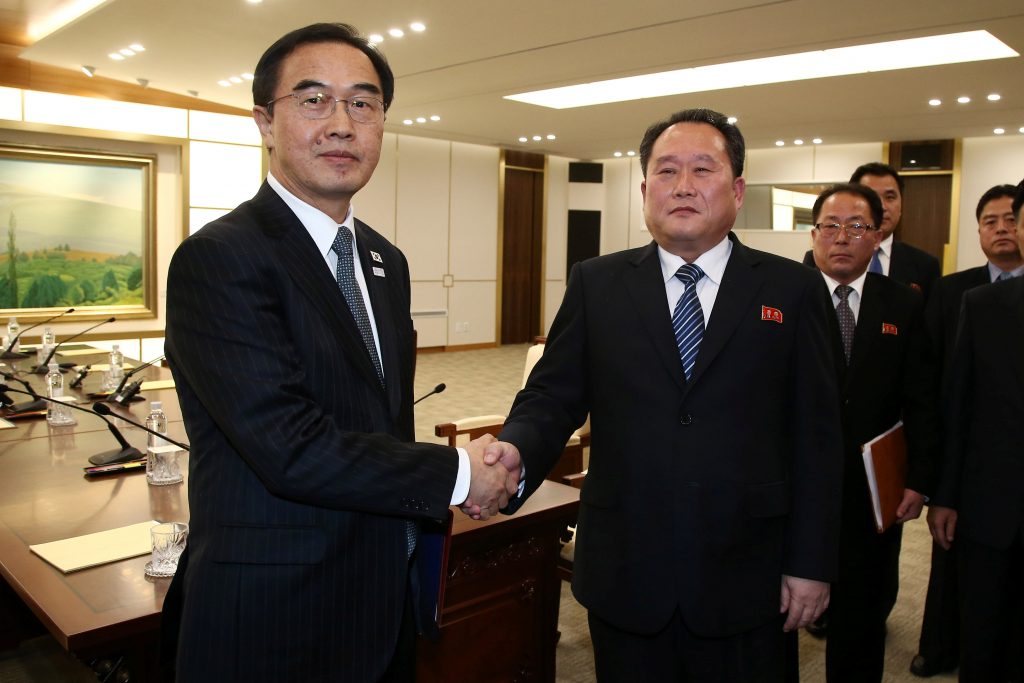 North Korea said on Tuesday it would not discuss its nuclear weapons in coming talks with Seoul because they were aimed only at the United States, not its “brethren” in South Korea.

Officials from North and South said they agreed on Tuesday to hold negotiations to resolve problems and avert accidental conflict, after their first official dialogue in more than two years amid high tension over the North’s weapons program.

The U.N. Security Council last month unanimously imposed new sanctions on North Korea in response to its test-firing of an intercontinental ballistic missile. Pyongyang called them an act of war.

In a joint statement after 11 hours of talks, the North pledged to send a large delegation to next month’s Olympics in the South, but made a “strong complaint” after Seoul proposed talks to denuclearize the Korean Peninsula.

“All our weapons including atomic bombs, hydrogen bombs and ballistic missiles are only aimed at the United States, not our brethren, nor China and Russia,” said Pyongyang’s chief negotiator Ri Son Gwon.

“This is not a matter between North and South Korea, and to bring up this issue would cause negative consequences and risks turning all of today’s good achievement into nothing,” Ri, chairman of the North’s Committee for the Peaceful Reunification of the Fatherland, warned in closing remarks.

Seoul believes improved inter-Korean ties and a series of steps agreed on Tuesday could pave the way for discussion of a “fundamental resolution” of the nuclear issue in the future, the South’s unification ministry said in a separate statement.

“We will closely coordinate with the United States, China, Japan and other neighbours in this process,” it said.

South Korea had asked the North to halt hostile acts that stoke tension on the peninsula, and the North agreed that peace should be guaranteed in the region, the ministry said.

The North-South meeting comes after a year of ramped-up North Korean missile launches, its sixth and most powerful nuclear test and exchanges of threats and insults between North Korean leader Kim Jong Un and President Donald Trump.

It was held in the three-storey Peace House on the South Korean side of Panmunjom truce village which lies between North and South.

“We came to this meeting with the thought of giving our brethren, who have high hopes for this dialogue, invaluable results as the first present of the year,” Ri said at the start of the meeting.

Seoul said it proposed reunions of members of families divided between North and South in time for February’s Lunar New Year holiday, but the joint statement made no mention of any agreement on reunions.

The North has finished technical work to restore a military hotline with South Korea, Seoul said, with normal communications set to resume on Wednesday.

The North cut communications in February 2016, following the South’s decision to shut down a jointly run industrial park in the North.

The United States, which has 28,500 troops stationed in South Korea as a legacy of the 1950-1953 Korean War, initially responded coolly to the idea of inter-Korean meetings, but President Donald Trump later called them “a good thing.”

“At the appropriate time, we’ll get involved,” he said.

On Tuesday, China’s foreign ministry said it was happy to see talks between North and South Korea and welcomed all positive steps. Russia echoed the sentiment, with a Kremlin spokesman saying: “This is exactly the kind of dialogue that we said was necessary.”