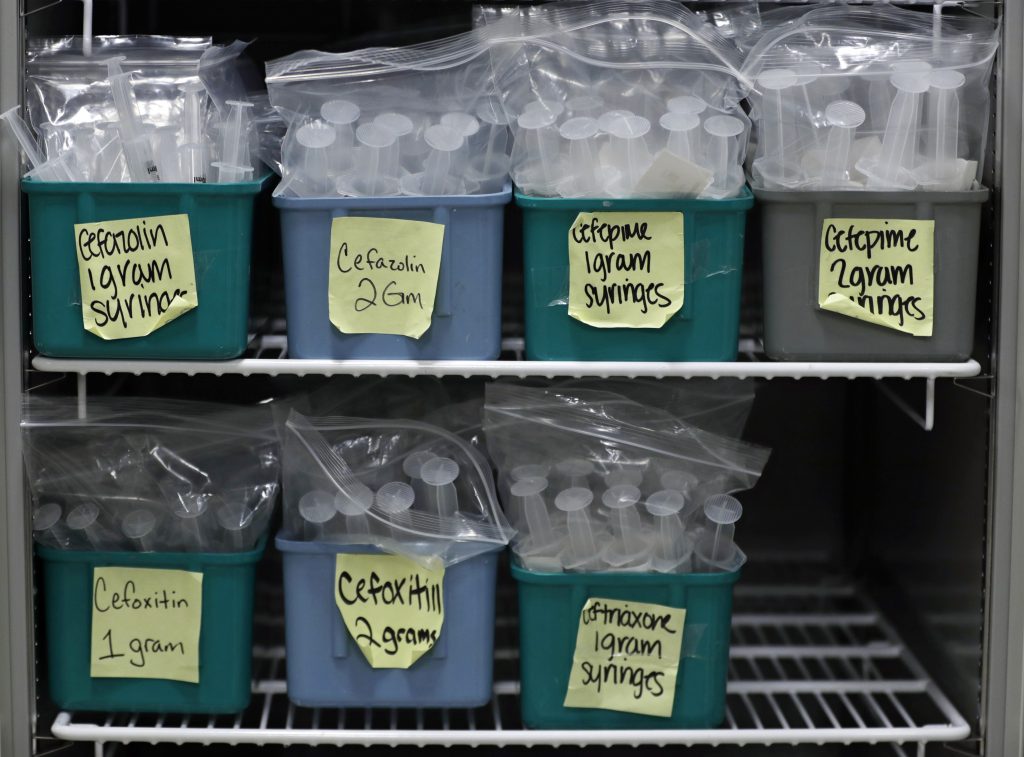 An ongoing shortage of fluids used to deliver medicine and treat dehydrated patients has hospital workers scrambling in the midst of a nasty flu season. Supplies from factories in storm-ravaged Puerto Rico have been slow to rebound.

Supplies of saline and nutrient solutions were already tight before hurricanes pounded Puerto Rico and cut power to manufacturing plants that make much of the U.S. supply of fluid-filled bags used to deliver sterile solutions to patients.

Flu season has turned out to be a bad one and it came early, bringing patients in need of fluids into hospitals already running low.

Hospital officials, pharmacists and other staff have been devising alternatives and workarounds, training doctors and nurses on new procedures and options, and hitting the phones to try to secure fluids from secondary suppliers.

“If we can’t support patients coming in emergency rooms who have the flu, more people are going to die,” predicts Deborah Pasko, director of medication safety and quality at the American Society of Health System Pharmacists, a professional group. “I see it as a crisis.”

The U.S. Food and Drug Administration said last week it believes shortages will start to ease over the next few weeks, but stressed “the production situation in Puerto Rico remains fragile.”

Puerto Rico’s power grid is being slowly restored and the last of three Baxter International factories there that make saline bags and nutrient solutions was reconnected in late December. But intermittent power outages are still slowing Baxter’s efforts to get back to full production.

Only a few other companies make those solutions, and supplies never fully recovered after a 2014 shortage of saline bags.

Now many hospitals are only getting half or two-thirds of what they order, and have only a few days’ worth of saline on their shelves.

“No one wants to come out and make it sound like their hospital isn’t safe,” but problems will worsen if shortages don’t ease soon, Pasko said.

Pasko and other hospital officials said they worry that changes in procedures and products could lead to errors.

Some hospital officials say the severity of shortages stabilized around year’s end, when elective surgeries and other services drop, but others say shortages are worsening.

Several noted a cascade effect, with new shortages created as hospitals all try the same workarounds. For instance, syringe supplies are running low because many patients are now getting injections instead of IV drips.

“Everything is hard to get because people are getting whatever they can,” said Deborah Sadowski, director of pharmacy services at Deborah Heart and Lung Center, a specialized hospital in southern New Jersey.

The worst shortage is for small saline bags. Hospitals use hundreds or thousands daily to hydrate patients and to dilute antibiotics, painkillers and other drugs, then hang bags from a pole so the mix slowly drips through a tube and into a vein.

Deliveries of those have been most unpredictable, said David Chen, a pharmacy director with Promedica, which operates 13 hospitals in Ohio and Michigan.

“Some facilities are getting virtually zero. Other are having them trickle in. You never know what you’re going to get,” Chen said.

Baxter says it’s been shipping those to U.S. hospitals since October, but hospital officials say that hasn’t been enough.

Erin Fox, who tracks nationwide drug shortages and heads the University of Utah health system’s drug information and support services, said its hospital system now has five to eight pharmacists a day working on nothing but managing shortages.

An Atlanta-area hospital run by Cancer Treatment Centers of America has had to rent special pumps to empty liter-size saline bags into many smaller ones for individual patients, said pharmacy services director Jamie Joy.

Nutrient solution bags, also running low, are needed for far fewer patients than saline, but there are few substitutes, said Connie Sullivan, head of research and innovation at the National Home Infusion Association.

Its members have been swapping products with other infusion services and even limiting the number of new patients they accept.

“I have never seen anything quite this bad,” Sullivan said.

They’ve also been changing some procedures, like trying to switch people off IV bags as soon as possible and not starting patients on IV drips during surgery until it’s certain they are needed.

On the positive side: Hospitals may find ways to permanently reduce use of saline bags. Ohio Health System will evaluate its new practices to see which are cost effective and should be kept, said pharmacy services head Curt Passafume Jr.

“We should learn something about patient care from this,” he said.