E. Coli Outbreak May Be Linked to Romaine Lettuce

An outbreak of E. coli infections in the U.S. may be linked to romaine lettuce, Consumer Reports warns.

A multi-state outbreak of Shiga toxin-producing E. coli infections — possibly linked to romaine lettuce — has caused the Centers for Disease Control and Prevention, Food and Drug Administration and several states to begin investigating. 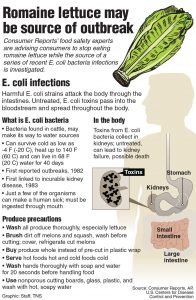 Five people in the U.S. have been hospitalized and one has died, according to Consumer Reports.

The Public Health Agency of Canada is also investigating an outbreak of E. coli infections in several provinces. As of Dec. 28, there are 41 reported cases under investigation in Canada; and the Canadian outbreak has been connected to romaine lettuce.

In Canada, 17 people with the infection have been hospitalized and one person has died.

U.S. agencies are now sampling bacteria to determine if the multi-state outbreak is related to the illnesses in Canada, the CDC said in a Dec. 28 statement.

Because the agencies have not identified a source of the infections in the U.S., the CDC said it is unable to recommend whether U.S. residents should avoid a particular food.

However, Consumer Reports advises that consumers stop eating romaine lettuce until the CDC completes the investigation.

“Even though we can’t say with 100 percent certainty that romaine lettuce is the cause of the E. coli outbreak in the U.S., a greater degree of caution is appropriate given that lettuce is almost always consumed raw,” said James Rogers, director of food safety and research at Consumer Reports.

Symptoms of Shiga toxin-producing E. coli infections include severe stomach cramps, diarrhea and vomiting, according to the CDC. In severe cases, the infections can become life threatening. The symptoms may not occur for as long as 10 days after you ingest the bacteria.

While anyone can get sick from the bacteria, young children, the elderly and those with weakened immune systems are most at risk.