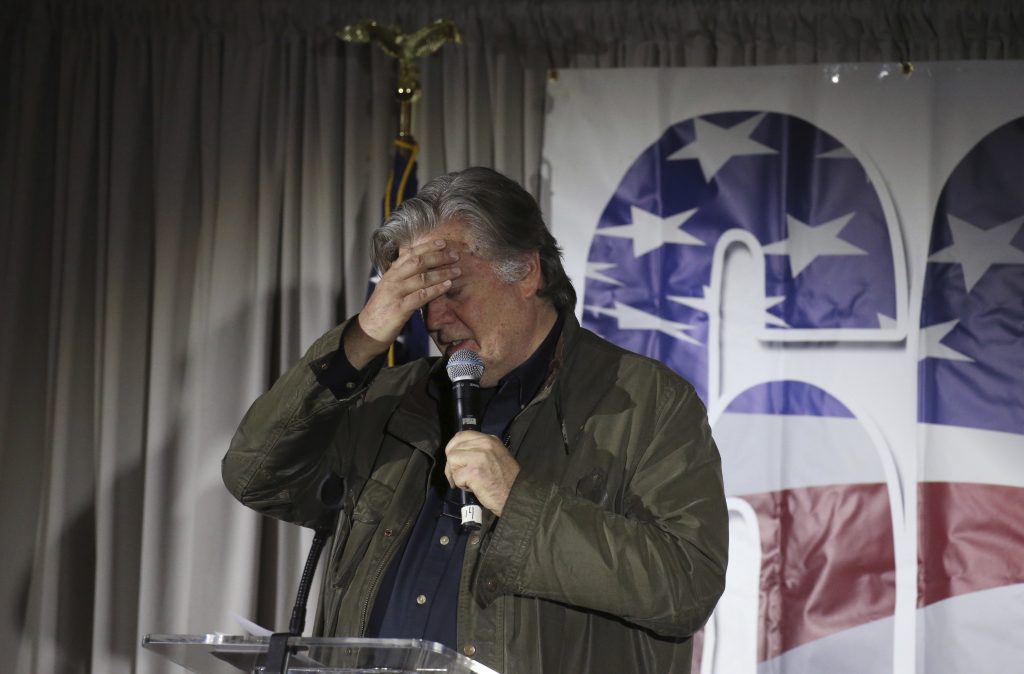 Stephen Bannon stepped down as executive chairman of Breitbart News Network on Tuesday, bringing an end to his relationship with the conservative news site that he helped become widely influential and which, in turn, abetted his rise as a political adviser and would-be kingmaker.

Bannon’s departure was a humbling denouement for a figure who had reached the uppermost levels of power only a year ago. It leaves him with no evident platform to promote his views and no financial basis for his preferred candidates.

Bannon left Breitbart in August of 2016 to join Donald Trump’s presidential campaign and later served as President Donald Trump’s chief White House strategist. He was fired by Trump almost exactly a year after formally signing up with him.

Bannon maintained his visibility by rejoining Breitbart in August and directing it to serve his political ends as the insurgent voice of the “anti-establishment” wing of the Republican Party.

His departure from Breitbart followed what appears to have been a vote of no confidence from a key supporter and investor in the website, Rebekah Mercer, a wealthy political donor, people at the company said. Mercer and her father, hedge-fund billionaire Robert Mercer, own a minority share Breitbart and are influential voices in its operation.

Bannon provoked Rebekah Mercer’s ire by making critical comments about Mr. Trump and his family to author Michael Wolff in a book published just last week. Bannon is quoted in the book as saying that Trump’s son, Donald Jr. and son-in-law, Jared Kushner, engaged in “treasonous” behavior by secretly meeting with Russian representatives during the campaign to get unflattering information about Trump’s opponent, Hillary Clinton.

Trump replied to Bannon’s comments with a statement savaging his former confidant. “Steve Bannon has nothing to do with me or my presidency. When he was fired, he not only lost his job, he lost his mind,” the president said. He later attacked Wolff and the book in a tweet in which he referred to Bannon as “Sloppy Steve.”

Mercer weighed in with a rare statement of her own on Thursday that distanced her from Bannon. “I support President Trump and the platform upon which he was elected,” she wrote. “My family and I have not communicated with Steve Bannon in many months and have provided no financial support to his political agenda, nor do we support his recent actions and statements.”

Although Bannon continued to chair Breitbart’s editorial meetings and host its satellite-radio program, Mercer’s comments appeared to signal his end, people at the media company said. Breitbart’s readers seemed to side with Trump in the spat.

In statements carried on Breitbart’s website, Bannon said, “I’m proud of what the Breitbart team has accomplished in so short a period of time in building out a world-class news platform.”

The site’s chief executive, Larry Solov, said, “Steve is a valued part of our legacy, and we will always be grateful for his contributions, and what he has helped us to accomplish.”

The Mercers were largely responsible for Bannon’s place at Breitbart, and vice versa; Bannon introduced them to the site’s founder, Andrew Breitbart, in 2011, and helped persuade them to invest $10 million in Breitbart’s vision of an insurgent conservative media outlet that would take on [the entertainment industry], the news media and established Washington figures, including conventional Republicans.

In exchange for their investment, the Mercers secured a seat for Bannon on Breitbart’s board. When Breitbart died of a heart condition months later, Bannon took over the operation.

He then set about turning it into a clarion of economic populism and nationalist sentiment. It advocated for strict limits on immigration, particularly from Latin America and from Muslim-majority nations, and for an “America-first” agenda in trade negotiations. Its political philosophy was amplified by Trump when he announced his candidacy in 2015, although Breitbart steered a relatively even line during the early primaries between Trump and Republican challenger Ted Cruz, the Mercers’ preferred candidate.

Bannon at one point described Breitbart as “the platform for the alt-right,” a phrase that became associated with white separatism, anti-Semitism and generally racist sentiments. Breitbart’s editors insisted the site endorsed none of those views.

The surprising election results in November 2016 turned out to be Bannon’s high-water mark; he would soon join Trump in the White House as the new president’s chief strategist.

But his tenure there was beset by a series of bruising internal fights and rivalries that would cost Bannon his White House job just seven months after he started it. Specifically, he clashed with chief of staff Reince Preibus and Kushner and his wife, Ivanka Trump, for access and influence with Trump.

He privately disparaged those he felt were insufficiently committed to Bannon’s agenda, including economic advisor Gary Cohn, as “globalists,” a term that Breitbart had raised to a high insult. Bannon hastened his own demise by criticizing administration rivals in a magazine interview in August.

Following his return to Breitbart that month, Bannon sought to assert his political muscle by assembling a field of like-minded candidates to challenge incumbents in Republican primaries. His most recent and boldest foray — supporting twice-defrocked judge Roy Moore in the Alabama senate race — turned out to be a disaster.

At the same time, Breitbart’s business fortunes have been in decline. Monthly traffic has fallen to around 15 million unique readers, according to ComScore, a level that makes Breitbart a leader among conservative news and commentary sites but is far from its election-era peak. The site has also lost thousands of advertisers due to a social-media campaign organized by a liberal group. Insiders say the privately held company, owned in part by Breitbart’s widow Susie, lost money last year.

Until very recently, the site has showered Bannon with laudatory coverage, treating him as if he were a leading newsmaker and political philosopher. While most news organizations are reluctant to tell their readers or viewers about their own executives, Breitbart covered Bannon’s statements and public appearances religiously. It even covered what other news organizations said about him.

The flattering press notices gave Breitbart the air of a personality cult built around Bannon, all the more so because Bannon was in charge of directing what Breitbart reported.