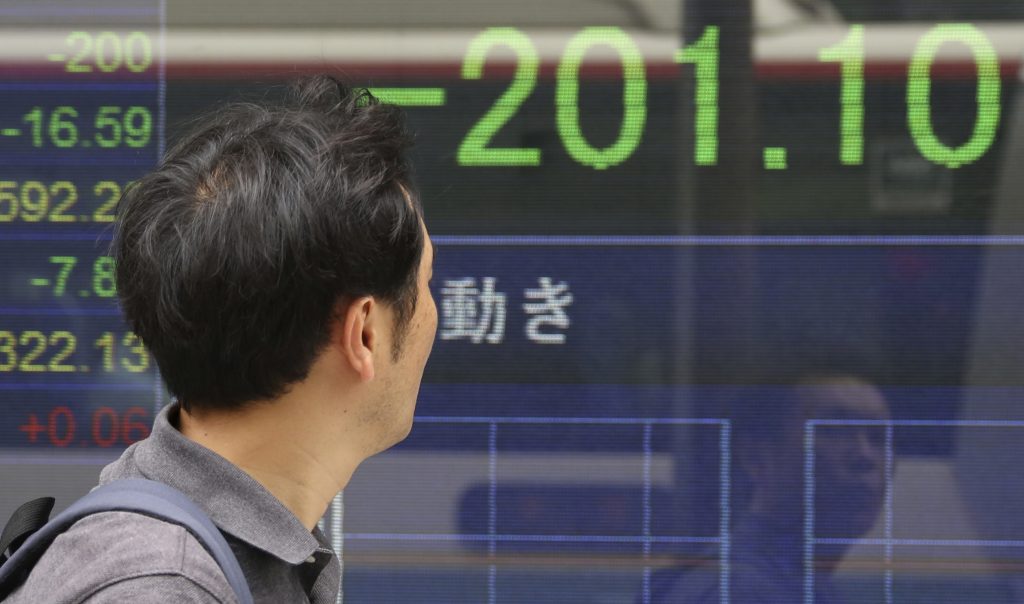 Asian shares pared gains on Tuesday, pulling away from the cusp of a record high, while the yen stole the currency spotlight and jumped, after the Bank of Japan’s (BOJ) slight reduction to its bond purchases reminded investors that it will eventually normalize policy.

European stock futures were slightly lower, suggesting a subdued opening for the region, with DAX futures slightly higher and FTSE futures up 0.2 percent.

MSCI’s broadest index of Asia-Pacific shares outside Japan was nearly flat in afternoon trade after earlier rising as high as 591.28, not far from its record peak of 591.50 scaled in November 2007.

Samsung’s guidance fell short of market expectations despite a forecast for a record fourth-quarter profit, as a strong won and one-off staff bonuses took the shine off surging DRAM chip prices.

The MSCI tech index for Asia slipped 0.1 percent, after it had gained more than 5 percent this year.

On Wall Street on Monday, the Dow Jones Industrial Average edged down 0.05 percent, the S&P 500 gained 0.17 percent, and the Nasdaq Composite added 0.29 percent. After the best start to a year in more than a decade, investors turned cautious ahead of earnings.

Japan’s Nikkei stock index added 0.6 percent to close at its highest level since November 1991, catching up to the previous session’s gains as markets reopened after a holiday on Monday.

Against the yen, the dollar erased its early modest gains and fell 0.3 percent to 112.74 following a drop as low as 112.50, after Japan’s central bank trimmed its purchases of Japanese government bonds (JGBs).

Since it adopted the yield curve control policy in 2016, the BOJ has made similar tweaks to its JGB purchases, which are regarded as mainly technical moves. On Tuesday it cut its JGB purchases of 10 to 25 years left to maturity and those of 25 to 40 years to maturity by 10 billion yen ($88.39 million) each, from its previous operations for those zones.

While the central bank’s operational adjustments do not usually have an impact on foreign exchange markets, dealers said the timing of the move suggested some players had used it as an excuse to sell the dollar and the euro against the yen.

“Major central banks around the world have begun to normalize policy, and the BOJ’s adjustments today reminded the market that someday it will, too,” said Ayako Sera, senior market economist at Sumitomo Mitsui Trust.

The dollar index, which tracks the greenback against a basket of six major rival currencies, edged down slightly to 92.326.

Underpinning the dollar, investors bet on further U.S. interest rate hikes after Friday’s payrolls data did nothing to challenge the outlook for monetary policy tightening by the U.S. Federal Reserve. While job growth slowed more than expected, a pick-up in monthly wages pointed to labor market strength.

“There was nothing in there to dissuade us from the view that the Fed will move again, appropriately, likely in March,” he said.

But the dollar’s upward momentum was tempered as investors differed on the pace of tightening, while U.S. inflation remains relatively cool.

Atlanta Fed President Raphael Bostic, who is a voting member of the central bank’s policy board, said on Monday that only two increases might be needed in 2018, in light of weak price pressures.

Crude oil prices firmed to their highest since May 2015, as political concerns in some OPEC nations offset projections for higher U.S. oil production.