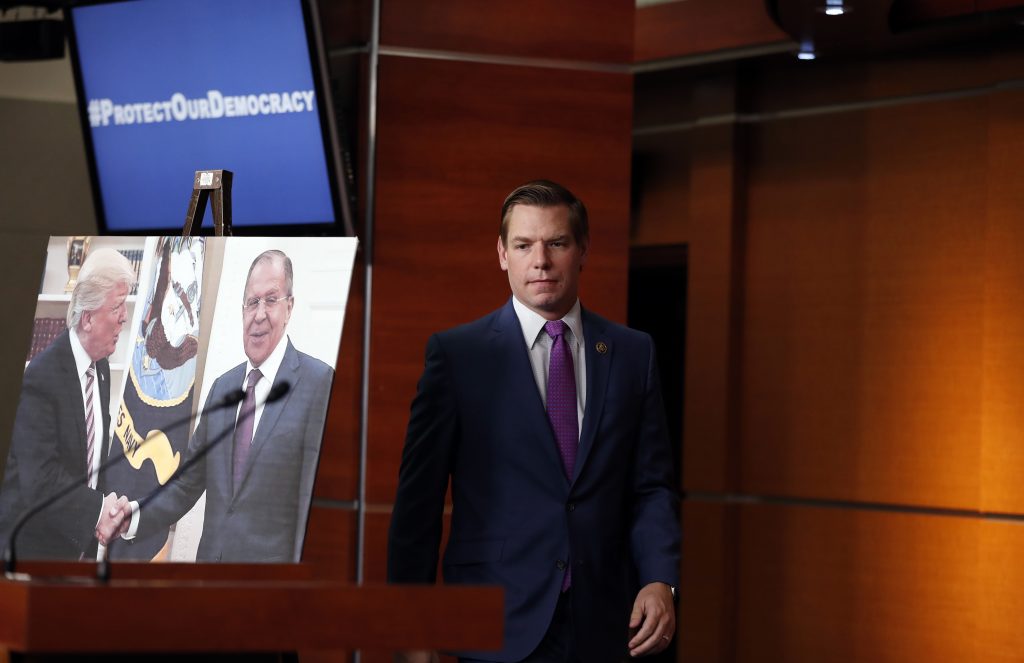 A Democrat on the House Judiciary and Select Committee on Intelligence said Sen. Lindsey Graham “looks like a man possessed” as the South Carolina Republican and other GOP lawmakers amp up pressure on the main actors behind the Trump dossier alleging the president is compromised by ties to Russia.

Democratic Rep. Eric Swalwell of California, one of a slew of Democrats to denounce the Republican senators for the criminal referral, criticized Graham for losing his way in deference to President Donald Trump.

“He was a man who I think understood who Donald Trump was when he was [a] candidate,” Swalwell said. But now he is “[parroting] these talking points that you’re seeing from Devin Nunes and conservative voices where it seems like there’s no end or no floor of the FBI building that they wouldn’t be willing to burn down just to advance the narrative of the president.”

Graham spokesman Kevin Bishop declined to directly respond to Swalwell’s comments, instead referring to a segment on Fox News where a panelist dubbed Graham and Grassley “oversight bulls” who people on “both sides of the aisle respect.”

“Seriously, you are writing about some congressman on MSNBC? Wow,” Bishop wrote in an email.

Graham and Grassley have asked the Department of Justice to create a special counsel to investigate Steele’s contacts with the DOJ, the FBI’s handling of the dossier and any circumstances surrounding it that could show bias existed against the president within the Justice Department.

They sent a classified memorandum to Deputy Attorney General Rod Rosenstein and FBI Director Christopher Wray detailing the findings that led to their request.

“I want a special counsel to look not only at how Mr. Steele conducted himself, what the FBI did with the dossier, whether [Department of Justice official Bruce Ohr], whose wife worked for Fusion GPS alongside Mr. Steele, what involvement did he have in the dossier?” Graham said on “Meet the Press” on Sunday.

Ohr met with Glenn Simpson, the founder of Fusion GPS, the opposition research firm that paid for the research that ended up in the dossier, after the November 2016 election “to discuss our findings regarding Russia and the election,” Simpson said in a court document. FBI Director James Comey concluded the initial Hillary Clinton email investigation in July 2016, four months before the 2016 election. Ohr has had no role in the ongoing Trump-Russia investigation, Rosenstein told Congress in December.

Still, Graham has his crosshairs fixed on Ohr for his role in the Clinton email investigation.

“I want to find out if the lead investigator of the Clinton email investigation had a political bias against Trump for Clinton to the point where it was a sham investigation,” Graham said.

Democrats on the Judiciary Committee were irate at their colleagues for issuing the criminal referral.

“I wasn’t consulted about this referral nor were any of my Democratic colleagues,” Sen. Dianne Feinstein, the top Democrat on Grassley’s committee, said Friday. “I think this referral is unfortunate as it’s clearly another effort to deflect attention from what should be the committee’s top priority: determining whether there was collusion between the Trump campaign and Russia to influence the election and whether there was subsequent obstruction of justice.”