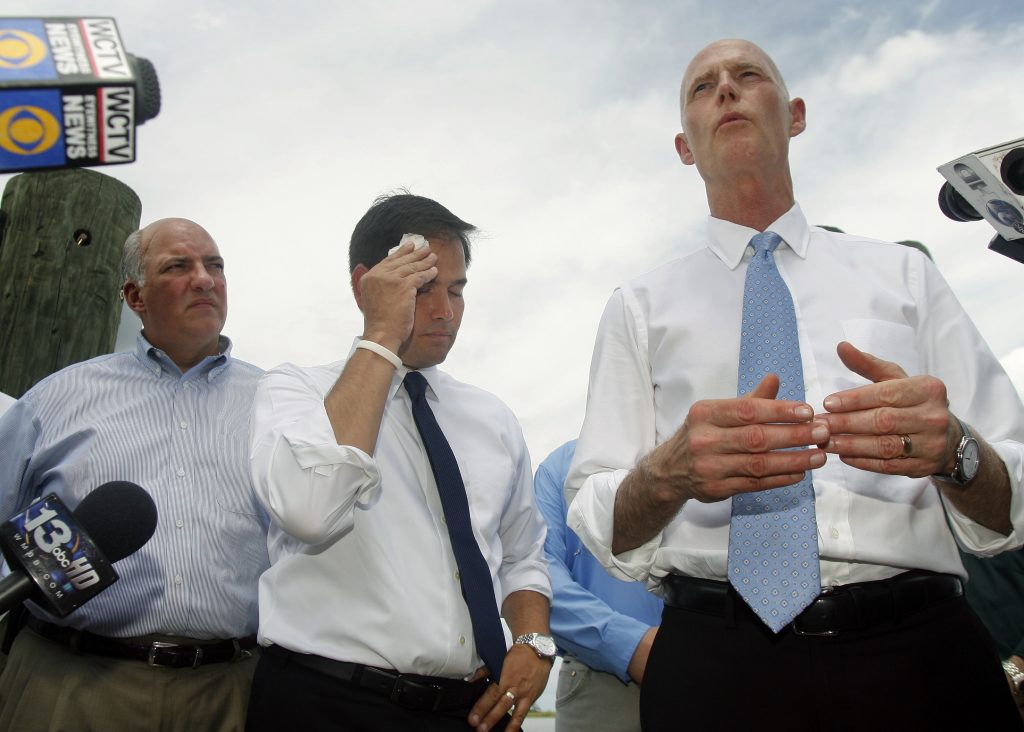 Reminders of the oyster’s pre-eminence in this slice of northwestern Florida are everywhere, from the shells that line the edges of downtown buildings to the paintings of oysters that dot the walls of Apalachicola’s art and history museum.

It’s the oysters themselves that are harder to find these days, and Florida is hoping the Supreme Court can help fix that. The high court hears arguments Monday in the long-running dispute between Florida and neighboring Georgia over the flow of water in the Apalachicola River, which runs from the state line to Apalachicola Bay and the nearby Gulf of Mexico.

Florida sued Georgia in the Supreme Court in 2013, blaming farmers and booming metro Atlanta for low river flows that harmed the environment and fisheries dependent on fresh water entering the area. Florida portrays the case as its last chance to “stem Georgia’s inequitable consumption” of water from the Chattahoochee and Flint rivers in Georgia, leaving too little by the time the rivers come together and pass into Florida.

“It is effectively strangling the Apalachicola Region and killing or threatening its animal and plant life,” Florida said in its Supreme Court brief. Although the justices usually hear appeals, lawsuits between states start in the Supreme Court.

Georgia said Florida has failed to show that it would benefit from any cuts imposed on Georgia, pointing to the conclusion of a court-appointed special master who recommended that the justices side with Georgia. Georgia also said Florida is asking for unreasonable reductions that would “threaten the water supply of 5 million people in metropolitan Atlanta and risk crippling a multibillion dollar agricultural sector in southwest Georgia.”

Complicating the issue is the absence from the lawsuit of the U.S. Army Corps of Engineers, which manages dams on the Chattahoochee River.

The agency has enough control over the flow of water that there might not be any increase in the water that reaches Florida, even if the court were to cap Georgia’s use of water from the Flint River, special master Ralph Lancaster found. The Corps could decide to store more water in its Chattahoochee reservoirs and cancel out any increases from the Flint River, Lancaster found.

The states’ battle over water use dates back to 1990, and includes drawn-out negotiations and several lawsuits. Alabama, which has the Chattahoochee on its eastern border, is not part of the current lawsuit.

For the tiny historic town of Apalachicola, the fight before the Supreme Court is more than some arcane legal struggle over water rights. Apalachicola wants to rescue its oyster industry, which collapsed in 2012 because of decreased flows in the river, Lancaster found in his report to the court last year.

The oyster harvest in the waters near Apalachicola plummeted from more than 3 million pounds in 2012 to just under 400,000 pounds in 2016, according to data collected by the Florida Fish and Wildlife Conservation Commission.

“It’s probably the most important thing in a century for Apalachicola,” said Pat Floyd, who has been city attorney since the 1980s.

“This is the best ecosystem and the most pure water body in the Northern Hemisphere,” said Floyd. “So, is that something worth giving away without a fight? … If we can make a dent and get the fresh water down here, this can revive and populate the oysters the way they have been.”

Carolyn White, a former nurse who moved from Athens, Georgia, 13 years ago, and now volunteers at the museum, said she often talks to visitors from Georgia who don’t understand the gravity of the water dispute.

“People come and visit us from Atlanta and they love it here,” White said. “They don’t understand that what’s going on upstream is affecting us down here.”

Florida’s legal fight hasn’t been cheap. Since Gov. Rick Scott gave the green light in 2013 to take the case to the Supreme Court, the state has spent nearly $60 million on legal fees.

“For 26 years and under five gubernatorial administrations, Florida has been fighting for its fair share of water on behalf of the families and jobs at risk in Apalachicola Bay due to Georgia’s reckless water use,” McKinley Lewis, Scott’s deputy communications director, said. Georgia officials declined to comment.

The Supreme Court decision isn’t likely to be the final word in the conflict, said Gil Rogers, director of the Georgia and Alabama offices of the Southern Environmental Law Center.

Rogers, whose group is not part of the case, said the Corps has to be part of any long-term solution. “It’s a complex river system that’s got a lot of pressure on it from a lot of different uses,” Rogers said.