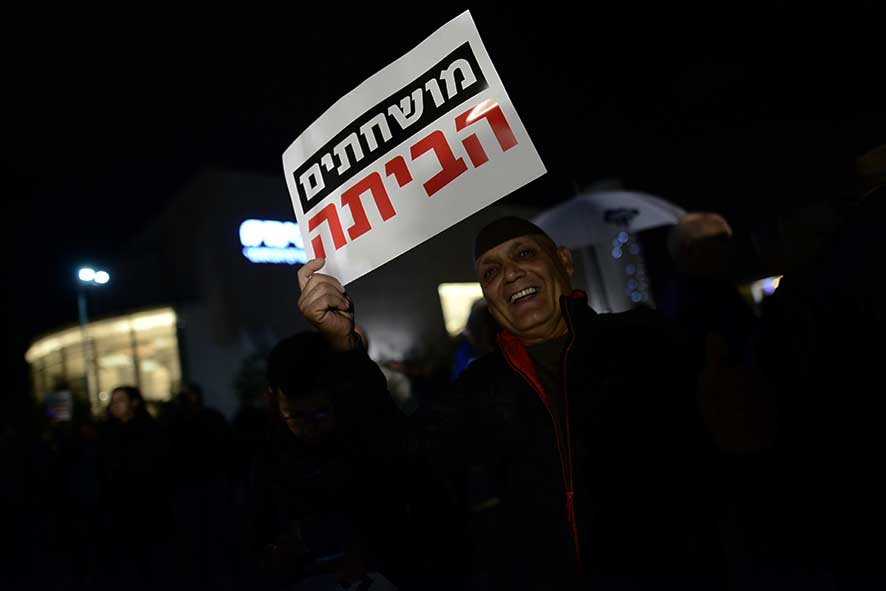 Several thousand people showed up in Tel Aviv on Motzoei Shabbos for the weekly protest against government corruption, but the numbers were noticeably smaller than in recent weeks, as Hadashot News reported that police recommendations on how to move forward in the investigations against Prime Minister Binyamin Netanyahu could be delayed even further — until Pesach.

That, commentators on the news said, was a “gift” for both the prime minister and other members of his government, especially Finance Minister Moshe Kahlon, as the government prepares to approve the 2018–19 state budget. “Historically, governments have usually fallen because of budgets, and if Netanyahu succeeds in passing the next biannual budget, it will guarantee a budget for the government until the next scheduled elections in mid-2019,” commentators said. “If the news regarding the police recommendations is correct, the chances of the government’s falling are reduced significantly.”

With that, police are not finished with Netanyahu, the report said; he is likely to be questioned an eighth time in the coming days. The main case against Netanyahu is Case 1000, in which Netanyahu was accused of accepting extravagant gifts, mostly cigars, from millionaire Arnon Milchin. According to Likud sources, police have not established any quid pro quo in the case, in that Milchin did not receive any consideration or benefit for the alleged gifts. Police last week were set to issue recommendations on whether or not Netanyahu should be indicted, but that deadline was pushed off several times in recent days, and it now appears that it will not take place until Pesach at the earliest.

Meanwhile, a poll showed that nearly half of Israelis see the Tel Aviv protests not as demonstrations demanding “clean government,” but as protests aimed at getting rid of Netanyahu. The poll, by the Israel Democracy Institute and Tel Aviv University, shows that 43 percent of a representative sample of Israelis believes that the purpose of the demonstrations is to force Netanyahu to resign or to pressure the justice system to indict him, thus forcing him to quit. Twenty-one percent believe that the demonstrators are sincere in their seeking less corrupt government, while 26.5 percent said that both motives were correct.

As far as the police investigation was concerned, 60 percent of those polled said they trusted police to responsibly investigate the corruption cases against Netanyahu, while nearly the same number said they trusted State Attorney Avichai Mandelblit to do the same.