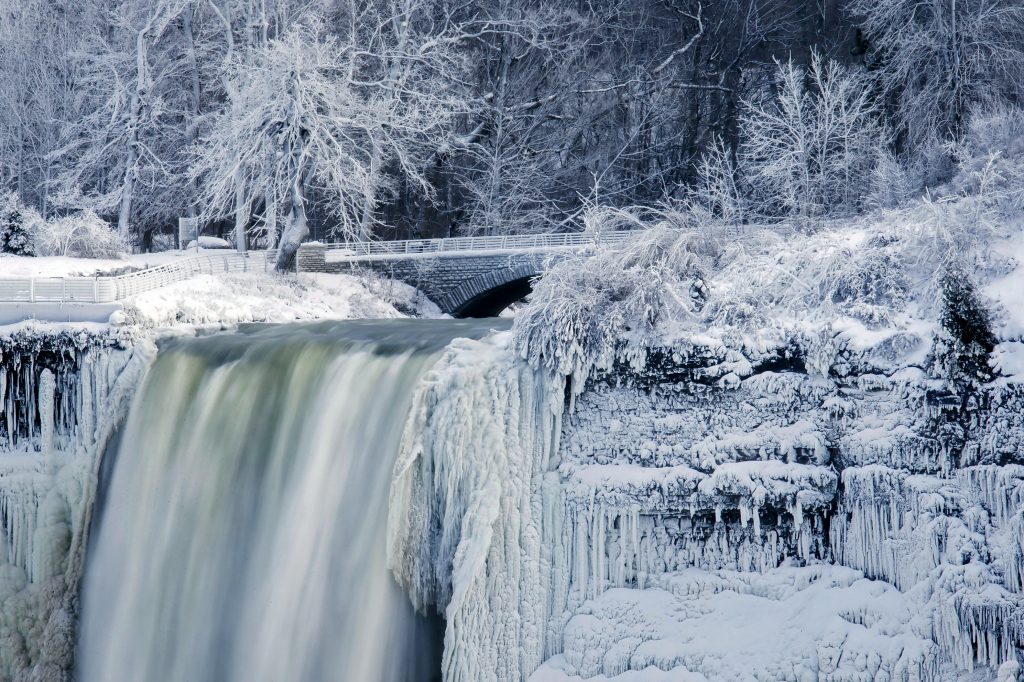 Niagara Falls might be at its most spectacular in winter.

Over the recent holidays, the icy cascade captured the public’s imagination: numerous newspapers ran stories about the frozen wonderland, and social media posts about the falls were widely shared.

But this is business as usual. Niagara Falls is replete with icicles and a glistening layer of ice every winter. As of now, the waterfall is still unfettered. Later in the winter, it will likely be fronted by a buildup of congealed ice.

Even that, though, will be just a vestige of what used to occur before Niagara Falls was remade in the 20th century. Much of what seems natural at Niagara Falls – ice formation, and the actual waterfall itself – is manufactured. Put differently, one of North America’s most celebrated natural wonders is, in many ways, unnatural, the product of decades of human intervention and manipulation.

Now, Niagara Falls never actually freezes over completely (though ice jams upstream can temporarily still the waters). Ice does form or gather at the base of the waterfall, building upward and outward, creating what is called the “ice bridge.” But water keeps flowing underneath the two main cataracts – the bigger Horseshoe Falls and the smaller American Falls – that make up the frozen facade.

Up until the early 20th century, the two eponymous communities of Niagara Falls, one Canadian, one American, would congregate on the ice bridge for trans-national ice parties. Kids would climb the ice mountains and slide down.

But these frozen festivities came to a tragic end on Feb. 4, 1912. The ice broke up and three people perished. Excursions onto the ice bridge were banned.

The ice would continue to cause problems in the following years, taking out the famed Honeymoon Bridge in January 1938.

How could such an unruly and unpredictable environment be tamed? By the time ice destroyed the bridge, experts were on the cusp of providing some answers.

Since the late 19th century, there has been a tension between beauty and power at Niagara Falls. On the one hand, it was considered the epitome of the natural sublime. On the other, Niagara was also the cradle of large-scale hydroelectric production and distribution. Successively larger generating stations were built, several taking turns wearing the mantle of biggest in the world. Industries such as aluminum and electro-chemicals arrived to take advantage of the cheap electricity.

As more power turbines came online, more water had to be diverted from the river. Various groups worried that siphoning off water harmed the scenic beauty of the cascades, along with the naturally occurring erosion that annually moved the Horseshoe Falls upstream some seven feet. Industrialists responded by disingenuously suggesting that diverting more water would protect the falls by slowing erosion.

Agitation for the preservation of Niagara Falls led governments to pass legal limits on diversions during the first decades of the 20th century. The U.S. and Canada formed engineering boards to study how to best replumb Niagara Falls to maximize water abstraction while veiling the impact on the waterfall’s appearance. They schemed to curtail the annoying spray and mist that left visitors soaking.

The result of these diplomatic talks was the Niagara River Diversion Treaty in 1950, which determined that during tourist hours, half of the river’s volume would be diverted around the falls to the downstream generating stations. The rest of the time, that is, at night and in the winter, three-quarters of the water was diverted.

But taking the majority of the water would have an unmistakable impact on the aesthetic appeal of the waterfall. This wouldn’t be good for the local tourism industry, not to mention all those claims about Niagara as the sublime.

The 1950 treaty called for the binational construction of the International Niagara Control Works. These consisted of various weirs, dams, excavations and fills meant to halt erosion and “beautify” the Horseshoe Falls by reapportioning the flow of water over the lip. In the words of the technocrats, the overarching goal was creating the “impression of volume” with an uninterrupted “curtain of water.”

The crest of the Horseshoe was reduced by several hundred feet, and the V-shaped notch in its riverbed was chiseled out. Islands and shoals were removed, while others were added. Above the waterfall, a control dam with movable gates was installed across the river. Reclaimed areas at the flanks of the cataract were landscaped, fenced and turned into the main public viewing points, while the face of the falls was riveted with cables and anchors.

Niagara Falls was changed, but in order to look more like itself. In the process, it was also transformed into a tap. Nowadays, the hydropower intakes at Niagara have the capability to completely turn off the falls.

Seeing as how Canadian and American engineers had given this great and powerful natural icon such a facelift, dealing with ice might seem like small potatoes by comparison. Yet controlling ice in the Great Lakes-St. Lawrence basin had long been marked by scientific uncertainty. Despite the use of the ice-deterring control dam aided by ice-cutter boats, ice still threatened to jam up the “organic machine” that Niagara had become.

One of the biggest worries was that ice would interfere with the water intakes for the new hydroelectric generating stations. The solution: the Niagara River Ice Boom. First installed in 1964, the boom was initially made of timbers. Now it consists of several hundred 30-foot pontoons, usually put in place around mid-December.

Despite the boom, and depending on winter conditions, Niagara Falls can still become encrusted in ice. But the large ice bridges of the past, as well as the full-throated flow of water over the falls, are no more.

Like the waterfall, the ice regime of Niagara has become, in the parlance of academics working at the intersections of environmental and technological history, a hybrid infrastructure that blends the artificial and the natural. Arguably, the real waterfall now drops down the penstocks of the power generating stations, far from public view.

Granted, drawing a stark distinction between the “artificial” and the “natural” is itself a problem. So is the hubris that leads to engineering enormous waterfalls.

The history of manipulating Niagara Falls conveys powerful messages about our willingness to reorder nature. And one of those messages is this: Remaking one of the continent’s premier natural symbols to fit our notions of progress gives license and encouragement to do the same to any other part of the nonhuman world. If we alter and commodify even those celebrated features of the natural world we claim to cherish, aren’t we sure to undervalue and exploit the rest of it?