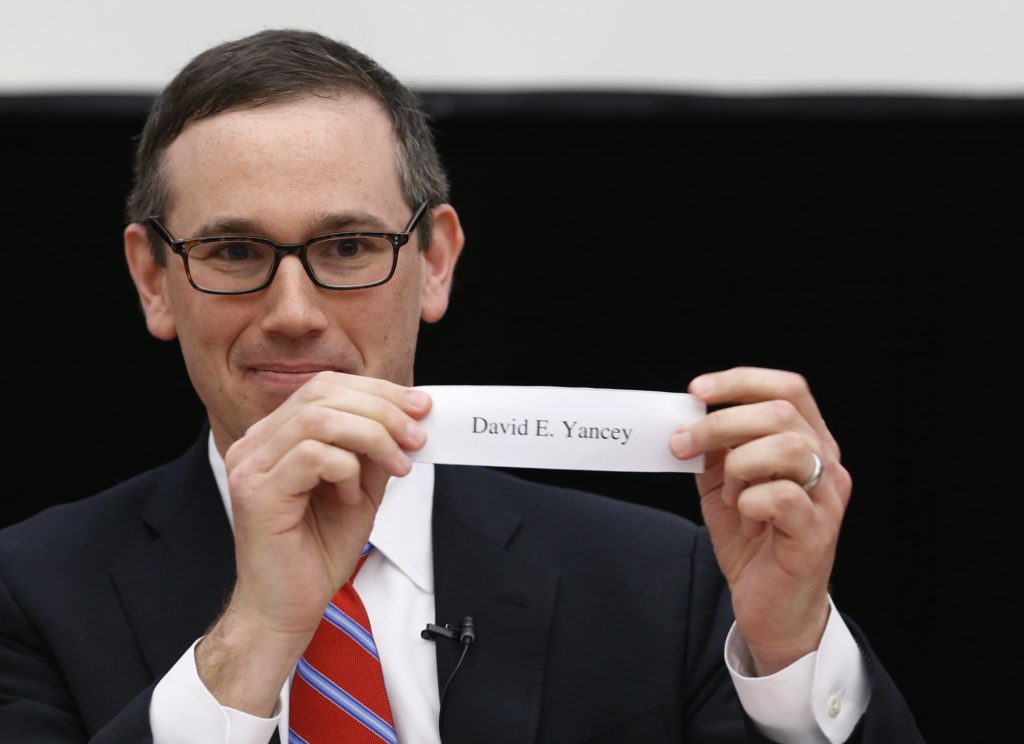 By luck of the draw, incumbent Republican David Yancey won a Virginia state House of Delegates race so close that its outcome was determined Thursday when an elections official pulled his name out of a ceramic bowl.

The drawing of lots happened after the race between Yancey and Democratic challenger Shelley Simonds ended in tie. The win allows Republicans to maintain a slim majority in the House, though a final tally is still uncertain because Simonds could ask for another recount. Adding another wrinkle: Another close legislative race is in doubt because it’s locked in a court battle.

The drawing drew a large, if lopsided, crowd to the Virginia elections board meeting. Many of the people packed into the room were either reporters or Simonds’ supporters. Yancey did not attend but did have a few GOP staffers there to watch.

The name of each candidate was printed on a piece of paper and placed into separate film canisters. The canisters were put into a cobalt-blue-and-white ceramic bowl made by a local artist, stirred around and Yancey’s name was chosen first.

As Yancey’s name was announced by Board Chairman James Alcorn, Simonds sat stoically. There were no cheers from Yancey’s few supporters. The electric mood went suddenly still.

Simonds endured a long moment of silence as the elections officials certified Yancey as the winner. The only sound in the room was the clicking of cameras, most of which were trained on Simonds.

Many state workers and staffers who work for Democratic Gov. Terry McAuliffe quickly left the room disappointed and Simonds addressed the media.

“This is a sad conclusion for me,” she said.

However, she did not rule out asking for a recount, saying that her options were still on the table.

House Republican Leader Kirk Cox said shortly after the drawing that Yancey’s win had cemented GOP control of the state House when the 2018 legislative session starts next week, even if Simonds asks for another recount.

Republicans currently control the chamber 51-49. If Simonds pursued a recount, it wouldn’t be complete before the session starts and Cox said neither Yancey or Simonds would be seated until a winner was finalized. That would still allow Republicans to elect a speaker and make committee assignments based on a 50-49 advantage.

The race between Yancey, a three-term incumbent, and Simonds has bounced back and forth since the November election, when Virginia Democrats — fueled by voter anger directed at Republican President Donald Trump — wiped out a 66-34 advantage held by Republicans in the House. The election has been widely seen as a potential harbinger of the 2018 midterm congressional elections.

Simonds appeared to have lost the November election by 10 votes, but on Dec. 19, she won a recount by a single vote. The next day, a three-judge panel declared a tie based on a previously uncounted vote for Yancey.

The ballot wasn’t counted during the recount and was identified after a Republican election official raised concerns the following day.

After the drawing Thursday, election board members asked the public to make sure that they correctly fill out ballots in future contests.

The balance of power in the House could shift again because a lawsuit is pending over the results of another House race in Northern Virginia. Democrat Joshua Cole lost to Republican Bob Thomas by 73 votes in a recount. But voters filed a federal lawsuit after at least 147 ballots were found to be assigned to the wrong districts. A federal court hearing on that election is scheduled for Friday.