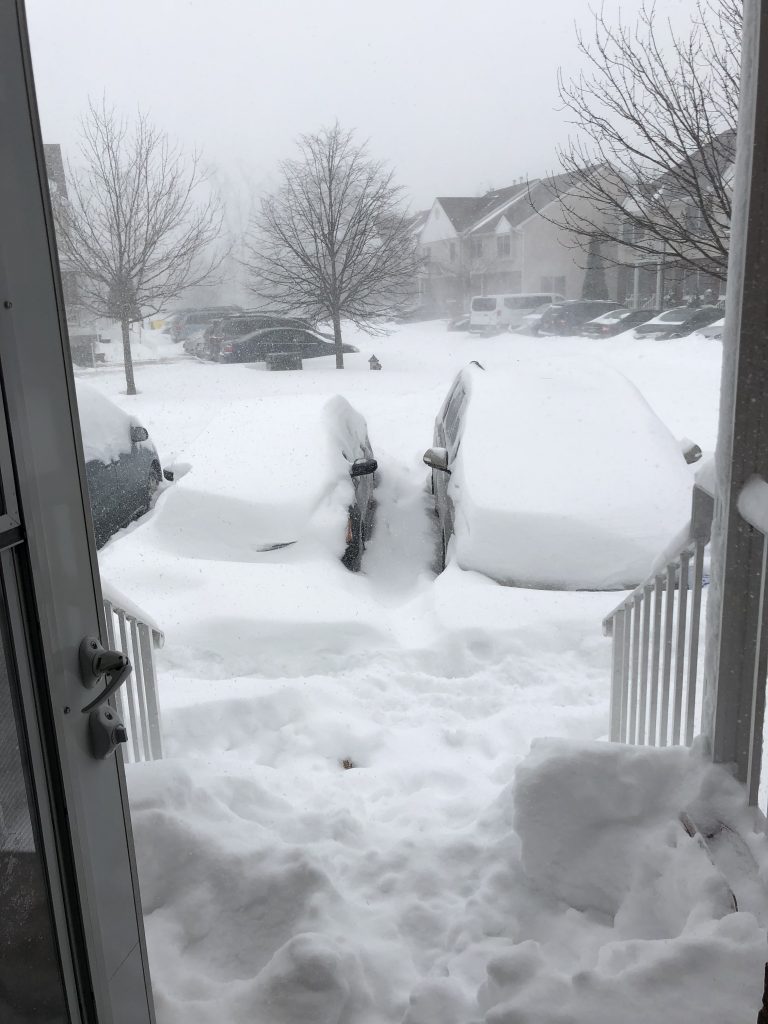 With an official state of emergency declared in Ocean and Monmouth counties, in New Jersey, Lakewood trudged its way through the first large snow storm of the season.

With heavy snow falling and strong winds blowing throughout the day, streets were nearly deserted, save for a few well bundled pedestrians and a smattering of slow-moving cars. Many stores at the busy shopping hub of 4th street and Clifton Avenue were closed for the day and many neighborhood shuls were busy with baalei batim who could not make it to work and bacuhrim and avreichim for whom the trip to Beth Medrash Govoha or smaller yeshivos was too treacherous to make.

“No one can get to the office today, so I came here to learn and I’ve been here since the morning,” said Baruch, an accountant who had just finished davening Minchah in Tiferes Shalom Nadvorna on Monmouth Avenue. “A real snow day like this that shuts everything down is such a mechayeh.”

While many businesses and all government offices were closed for the day, plows were diligently rolling up and down major streets since early Thursday morning.

Mayor Ray Coles was on vacation in Mexico at the time of the storm, but said that he had been in constant contact with his fellow township committee members and was monitoring the situation closely, despite his remote location.

“The plows have been at it all day and will be out all night, but the snow is light and the wind is very strong so the snow keeps on getting blown back into the streets and the drifts can be a few feet in some places,” he told Hamodia. “Until the wind dies down, we strongly recommend staying off the roads.”

Mayor Coles praised the efforts of Public Works Director, Pat Donnely, who has had a fleet of 130 vehicles ready to clear streets as soon as possible. Garbage pickups and Lakewood Community Shuttle buses ran until mid-day when road conditions were judged to be too dangerous.

Committeeman Meir Lichtenstein told Hamodia that an additional factor that has improved the town’s clean-up efforts is a 24 hour mechanic shop set up at the Public Works Department in advance of the storm to facilitate keeping the maximum number of plows on the road. He said that in addition to the 130 vehicles, the township had 4,000 tons of salt ready to use on roads.

“I was at Public Works early this morning and the place was buzzing,” said Mr. Lichtenstein. “The storm is packing a wallop, but they’re being very aggressive.”

He added that while police patrols had to switch to high traction vehicles for some time during the height of the storm that all emergency vehicles were able to operate as needed.

By Thursday night, snowfall had ceased, but Mr. Lichtenstein, warned that getting roads safe for driving could take some time in light of predictions of very low temperatures which could lead to icy conditions.

At 5 a.m. Lakewood Student Transportation Association (LSTA), which is responsible for the transportation of all of Lakewood’s private schools, held a conference call with township officials and several other agencies to determine if buses could run, but the forecast provided a simple answer.

“We wait as long as we can to make the decision so that if things get better so we can still have busing, but this time the snow wasn’t just making roads slippery, the wind was making visibility very low. It was a pretty easy decision this time,” LSTA Director, Avraham Krawiec told Hamodia.

Without transportation, all schools for girls and the vast majority of chadarim were closed for the day. Some located in the town center such as Satmar and Bnei Torah remained open and encouraged students who lived nearby to walk to classes.

“This storm was difficult to gauge and we really got slammed in the end, but all the agencies planned for different contingencies and I’m very proud of the response so far,” said Mayor Coles.