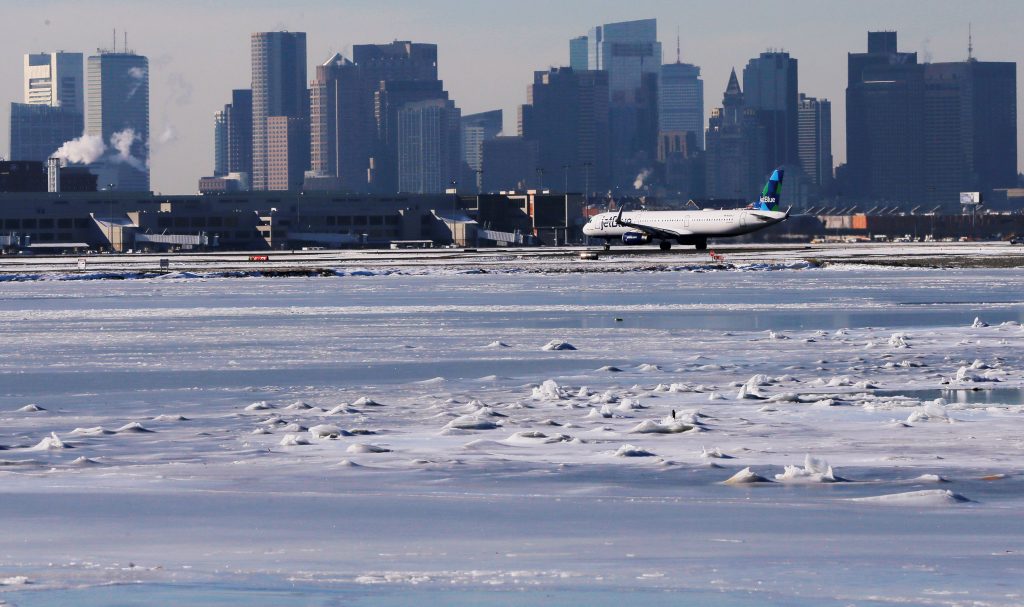 Residents across a huge swath of the U.S. were hunkered down as a massive winter storm packing snow, ice and high winds, followed by possible record-breaking cold, moved up the Eastern Seaboard, with the worst conditions expected from the Carolinas to Maine.

The massive storm expected on Thursday began two days ago in the Gulf of Mexico, first hitting the Florida panhandle. It has prompted thousands of canceled flights, shuttered schools and businesses and sparked fears of coastal flooding and power outages.

Wind gusts of 50 mph to 60 mph, strong enough to cause downed trees and power lines, are predicted in places where the National Weather Service has issued blizzard warnings. They include the Delmarva Peninsula, which includes parts of Delaware, Virginia and Maryland; coastal New Jersey; eastern Long Island, New York; and coastal eastern New England.

Winter storm warnings stretched as far south as South Carolina on Wednesday night, but National Weather Service Meteorologist Dan Peterson said the storm should be over by early Thursday in the southern states. For most of Thursday, he said, the storm will impact the Northeast, with Boston possibly getting up to 14 inches of snow. The storm will then be followed by a wave of bracing cold.

“We think there are going to be scattered records broken for low temperatures,” said Peterson, adding that the weather service expects 28 major cities across New England, eastern New York and the mid-Atlantic states will have record low temperatures by dawn on Sunday.

State and local officials urged residents to prepare for possible power losses and stay home so crews can clear streets and roads of what could be as much as a foot or more of snow in some places. There were concerns in Boston and elsewhere that if roads aren’t properly cleared, they could freeze into cement-like icy messes by Friday, given the expected low temperatures. In other areas, plummeting temperatures already have caused water mains to burst.

“As your governor, I am asking you, I am imploring you to stay home tomorrow. Let us do our work,” Rhode Island Governor Gina Raimondo said Wednesday. The state’s electric utility, National Grid, predicted power could be knocked out to an estimated 50,000 customers with the expected high winds that could gust up to 70 mph.

The blast of winter weather and plunging temperatures that has gripped much of the U.S. in recent days already has taken a human toll.

The number of deaths linked to the relentless cold had risen to at least 17 on Wednesday. Two homeless men were found dead in Houston, where police said the deaths were believed to be the result of “exposure to frigid weather.” Deaths also were reported in Mississippi, Michigan and other states.

In Virginia, where Democratic Gov. Terry McAuliffe declared a state of emergency, people were buying shovels and insulation for pipes as flurries began to fall on Wednesday. Some southern cities only experience storms like this every few years, at most.

“This is probably going to keep the kids out of school until Tuesday. None of it is going to melt,” said Doug Nashold, 55, a retired U.S. Navy ship captain who had tubes of pipe insulation hung over his arm as he left a Home Depot in Norfolk. He already had one pipe burst from the intense cold.

“I thought I was prepared, but it got colder a lot quicker than I thought it would,” he said.

The storm has resulted in thousands of canceled flights at major airports such as Boston’s Logan International Airport and New York’s LaGuardia Airport and disrupted the schedules at regional airports.

Amtrak planned to operate a modified schedule between New York and Boston on Thursday. Northeast Regional Service between Washington, D.C., and Newport News/Norfolk, Virginia, was canceled for Thursday.

The coastal Southeast got a rare blast of snow and ice on Wednesday. Schools were shut down just months after hurricane threats. I