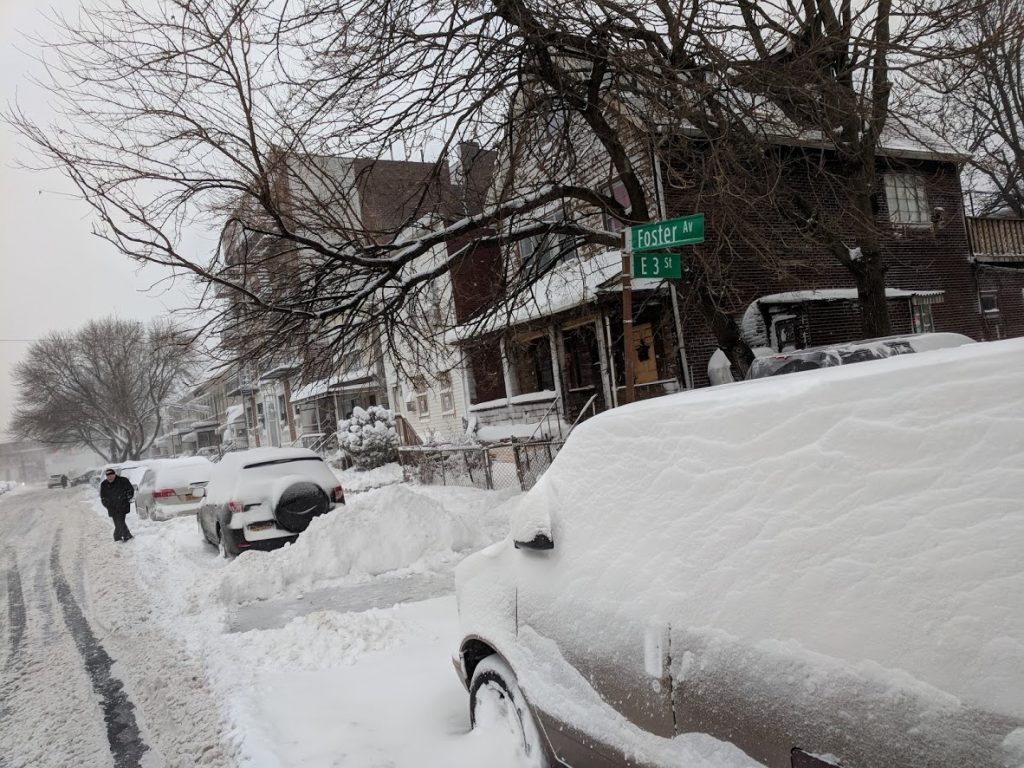 The predicted swiftly-moving bombogenesis storm dumped a day’s worth of snow in a matter of hours on Boro Park and Flatbush Thursday, though residents were generally taking it in stride.

There was some grumbling by residents of roads filled with snow. Officials said that all roads were plowed at least twice, but the fast pace of the snow and powerful wind gusts covered them almost as quickly.

“Roads have been cleared at least twice but are still dangerous,” warned Councilman Kalman Yeger, who spoke to Hamodia by telephone from outside the sanitation depot on 20th Ave.

“Sometimes it looks like it wasn’t plowed, but it was plowed,” added Barry Spitzer, the district manager of Community Board 12, which covers most of Boro Park and Flatbush. “It’s just coming down so fast that you can’t tell.”

Across the board’s jurisdiction, Spitzer said, there are 25 plows, five spreaders and two plow-spreader combos prowling the streets and avenues. In addition, there were two front-end loaders on standby if the storm gets worse. And the Boro Park sanitation depot recently began storing its own salt depositary.

The Sanitation Department tweeted out color-coded maps of the city, which showed regular passes by plows and snow removal trucks. The city is under a winter storm warning until 1 a.m. Friday, when the snow is expected to end.

Tova Chatzinoff, the deputy chief of staff to Councilman Chaim Deutsch, said that the councilman has been about his Midwood district the entire day. She warned that temperatures below zero on Friday night could make any outdoor activity treacherous.

“The office of emergency management told us that salt is less effective in such cold so we won’t achieve ‘blacktop’ (completely clean roads) until tomorrow,” Chatzinoff said. “It’s going to be bitterly cold on Friday through Sunday and there will be black ice on the streets; that’s why we’re asking people to stay off the roads as much as possible.”

Many schools closed their doors for the day amid warnings of a bombogenesis — also called a “bomb cyclone,” or a storm that combines powerful winds along with drenching rains in the spring and blizzard conditions in winter. Mayor Bill de Blasio announced late Wednesday that public schools would be closed across the city, and many yeshivos followed suit.

It was just the mayor’s fifth snow day since taking office four years ago.

In Flatbush, Josh Mehlman of the Flatbush Jewish Community Coalition told Hamodia that all girls’ school were shuttered while many boys’ yeshivos held voluntary learning sedarim.

“I was in a shul this morning, and right after davening kids sat down to learn with their fathers,” Mehlman said. “Boys are taking this seriously. Some kids are outside playing in the snow, on sleds.”

He added that all botei medrash and kollelim were open as usual.

“I am in touch with the council members representing this neighborhood,” Mehlman said, “and they assured me they are working with the sanitation department to make sure everything is cleared.”

In Boro Park, there were some girls’ schools closed while most yeshivos were open. A false tweet by a reporter that Gov. Andrew Cuomo had declared a travel ban beginning at 2:30 p.m., however, led some yeshivos to send home the students early.

The ban was fake news — it was link to a travel ban from two years ago — but it caused consternation among people who wondered if the storm would be getting worse. One storeowner questioned how he would be able to accept deliveries a day before Shabbos if vehicles would be banned from the streets.

Predictions of the storm led to a rush to purchase essential supplies in supermarkets in the neighborhood. Stores such as KRM in Boro Park and Pomegranate in Flatbush had huge lines Wednesday night as families made their Shabbos orders early.

For Yeger, a freshman lawmaker only on his second working day on the job, a snowstorm gave him a chance to show off the experience he touted during the campaign last year.

Yeger praised the sanitation department for its response to the bombogenesis that “we are just learning a new word about,” saying that they were ready for it and “are doing an incredible job.”