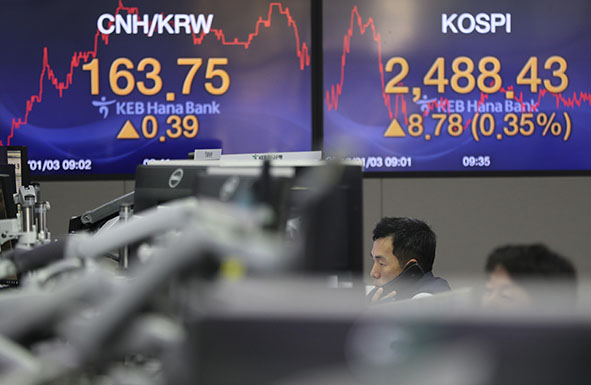 World stocks hit fresh highs on Wednesday with European markets joining the party as early indications suggest 2018 will be another year of synchronized global growth led by a shining European economy.

After its biggest one-day gain in more than two weeks on Tuesday, in the wake of its best year since 2009 in 2017, MSCI’s index of global stocks, which tracks shares in 47 countries, pushed on to new record highs.

The pan-European stock index opened 0.3 percent higher, adding to gains for their Asian and the United States counterparts overnight as manufacturing surveys pointed to a strong start for the European economy.

The single currency was holding near a four-month high of $1.2081 hit on Tuesday.

“Investors have woken up in the new year and looked forward to another firm year for global growth with very muted downside risk,” said Investec economist Philip Shaw, though he warned against reading too much into the first two trading days of the new year.

“The converse is the sell-off in bond markets: the idea that inflation pressures may be firmer than expected and central banks could take a slightly more aggressive approach than previously thought,” he said.

For example, ECB rate-setter Ewald Nowotny told a German newspaper that the European Central Bank may end its stimulus program this year if the euro zone economy continues to grow strongly.

Borrowing costs across the euro area stayed near recent highs: the yield on Germany’s 10-year government bond – the benchmark for the region – was close to a two-month high at 0.46 percent.

Earlier in the session, Asian stocks struck a range of new peaks: a record high for Philippine stocks, a 24-year top for Thailand and a decade-high for Hong Kong.

MSCI’s index of Asia-Pacific shares outside Japan rose 0.4 percent, having jumped 1.4 percent on Tuesday in its best performance since last March.

This after Wall Street started the new year as it ended the old, scoring another set of record closing peaks. The Dow rose 0.42 percent, while the S&P 500 gained 0.83 percent and the Nasdaq 1.5 percent.

The gains in riskier assets came as industry surveys from India to Germany to Canada showed quickening activity.

“The breadth of the recovery is extraordinary,” said Deutsche Bank macro strategist Alan Ruskin, noting that of 31 countries covered, only three failed to show growth while all the largest manufacturing sectors improved.

Oil prices hit their highest since mid-2015, only to stall when major pipelines in Libya and the U.K. restarted and U.S production soared to the strongest in more than four decades.