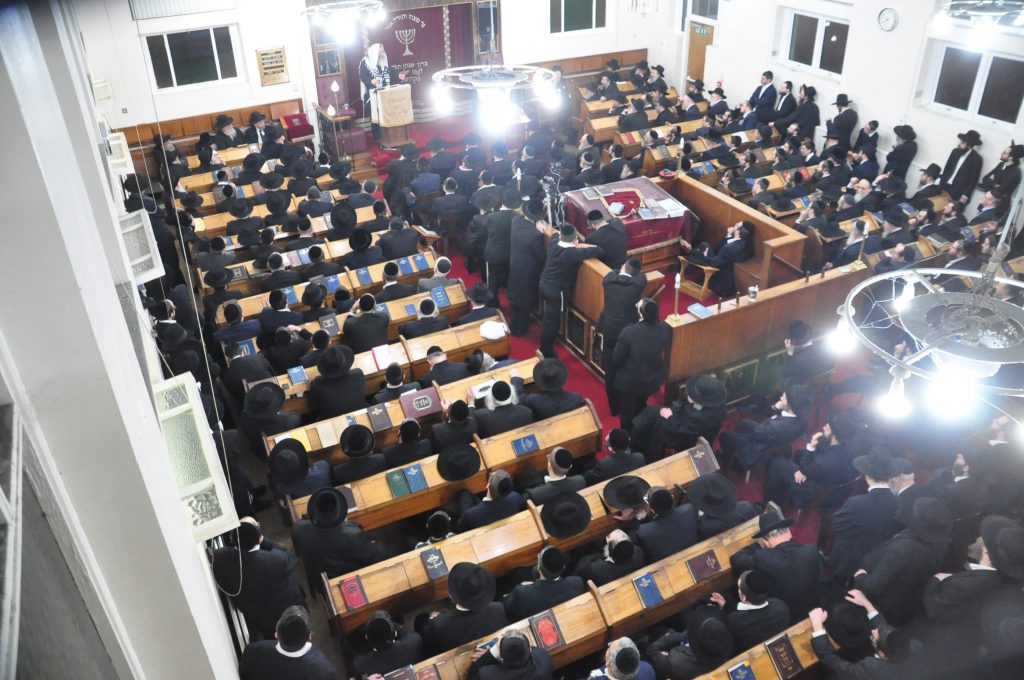 An overflow crowd packed the Machzikei Hadass Shul on Sunday, Dec. 31, for an evening of hisorerus following the petirah of the Gadol Hador, the Rosh Yeshivah Harav Aharon Leib Shteinman, zt”l.

The tzibbur was first addressed by Harav Pinchos Shneebalg of Vizhnitz, North London, as an emissary of his father, the revered Mara d’Asra of Manchester, shlita. Rav Shneebalg spoke of the huge void that is left when a Gadol b’Torah leaves this world, and how it is our duty to fill that void. The Rav told of how, as a bachur, Rav Shteinman had bound his hands to a bench to keep himself awake when learning, of how the Rosh Yeshivah had prayed to lose his sense of smell so as not to endure the smell of avodah zarah, and of how he had never tasted a sweet drink in his lifetime. When asked by a doctor how he had felt that morning, the Rosh Yeshivah replied, “I’m only interested in remembering [Torah]; I cannot remember how I felt this morning.” These high levels of perfection in bein adam laMakom were not at the expense of bein adam l’chaveiro. Although those same spiritual levels may not be equally attainable by everyone, Rav Shneebalg explained, it is nonetheless incumbent upon all to connect ourselves to them in some way.

Harav Yehuda Aryeh Dunner of Divrei Shir, Bnei Brak, spoke next. For close to an hour Rav Dunner related scores of stories and lessons he learned firsthand from his frequent visits to the exalted home of Rav and Rebbetzin Shteinman. Rav Dunner related the Rosh Yeshivah’s wisdom as to when and how to give mussar, and how to afford everyone the chance to succeed in Torah, which was also a display of his great love for Klal Yisrael. Our purpose in life, Rav Dunner explained, is to see how the Gadol became so great, and to draw inspiration from his continuously high level of avodas Hashem. The Rosh Yeshivah’s fear of the Yom Hadin accompanied him throughout his long life, from when he had been shown kavod by the Chazon Ish up until his senior years when many seemingly unrelated she’eilos reminded him of what happens after one’s neshamah leaves this world.

The final speaker was Harav Nosson Kopshitz, Rav of Romema, Yerushalayim. He related the special relationship the Gadol allowed many others to enjoy, due to his great humility.

The Rosh Yeshivah was comparable to the Beis Hamikdash, through which Klal Yisrael was endowed with their spiritual and material needs. All the great yeshivos depended on his guidance, and great philanthropy was channeled through his holy hands. Too many spend their entire life chasing money and honor, while the Rosh Yeshivah instead loathed kavod and financial comfort. A Maggid Shiur in Yeshivas Ponevez recalled how Rav Shteinman had been requested to give higher level shiurim to the bachurim in yeshivah ketanah, and his response was, “If I was worthy of giving higher level shiurim, I would have been in the yeshivah gedolah!”

Rav Kopshitz concluded with the enduring message of the Rosh Yeshivah, who would constantly teach about being mevater and how this brings blessing to a person. How careful we must be, said the Rav, to avoid pursuing material success – and this will serve as an ilui neshamah.