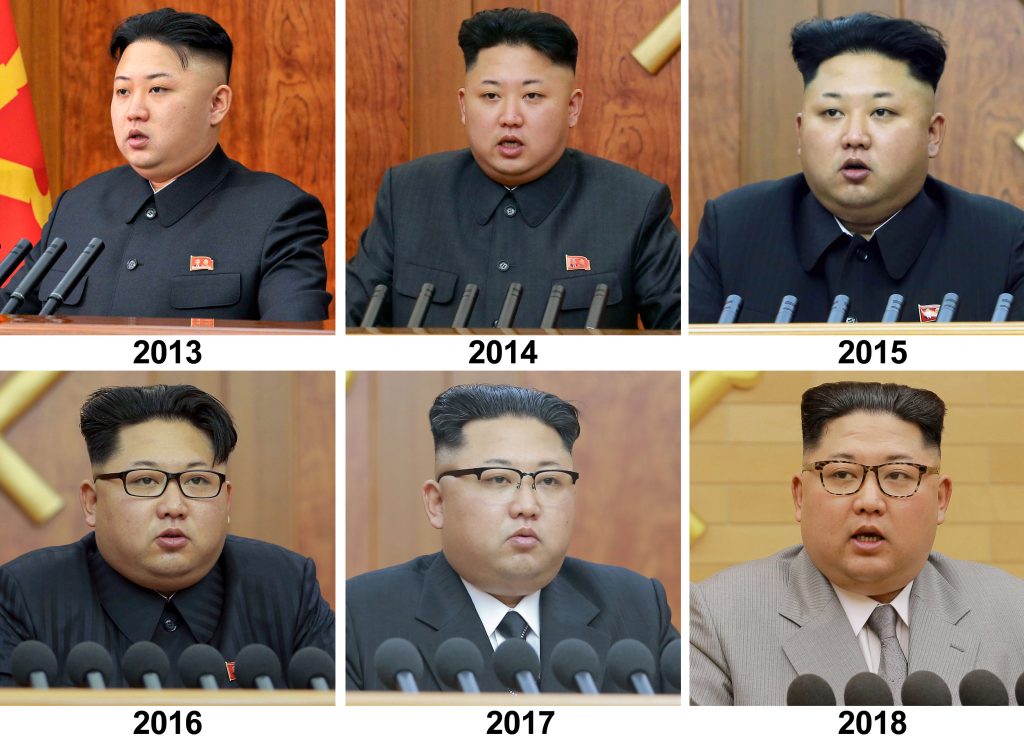 The light-gray suit and matching tie North Korea’s Kim Jong Un donned for his Jan. 1 address was likely carefully calculated to project a softer, more relaxed image to go with his surprise offer for talks with Seoul, analysts said on Tuesday.

Departing from his usual black or navy suits, Kim gave his speech wearing black-rimmed glasses and slicked back hair, speaking fluently and rarely looking down to read.

“In this New Year’s address, North Korea seems to have taken great pains with the image portrayed by Kim Jong Un,” said an analysis by the state-run Korea Institute for National Unification after Kim’s speech.

“The change from [Kim’s] …  previous dark Maoist suits to a softer-toned gray Western-style suit likely aimed to underpin peace, which Kim stressed in his address, and reflected a relaxed state of mind that probably came with the completion of the North’s nuclear power,” the Institute said.

After a year dominated by fiery rhetoric and escalating tensions over Pyongyang’s nuclear weapons program, the North Korean leader declared his country “a peace-loving and responsible nuclear power” and call for lower military tensions and improved ties with the South.

Kim also said he was open to dialogue with Seoul, prompting South Korea on Tuesday to propose high-level talks between the two countries on Jan. 9 at the border truce village of Panmunjom.

Analysts said the North Korean leader’s speech on Monday showed more confidence compared to previous years, his old habit of swaying from side to side while making speeches nearly undetectable. In his first New Year’s address as North Korea’s leader in 2013, Kim had frequently sounded short of breath, his voice wavering from time to time.

This year, there was none of that.

Kim Gun-hee, a consultant on image-making and leadership, said the gray suit may have been designed to deflect some of the negative global attention Kim’s nuclear and missile tests have prompted.

“When we advise clients who are in tough situations or are surrounded by unfavorable rumors, we tell them to wear either white or gray,” she said.

“In the study of color psychology, white imbues innocence while gray tends to take attention away from you. Kim may have felt some pressure from being at the center of global focus and turned to gray after sticking to dark tones for several years.”