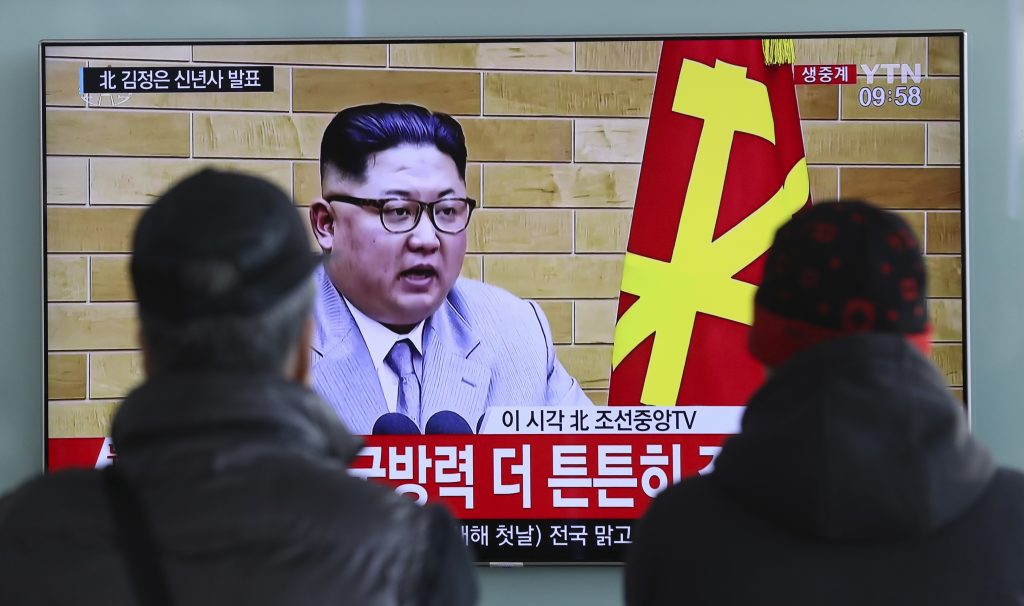 After a year filled with nuclear provocations that raised fears of a devastating war in Northeast Asia, North Korean leader Kim Jong Un started 2018 on an optimistic note.

His call for talks to ensure the success of the Winter Olympics in South Korea next month — and improve overall inter-Korean relations — represented a tactical shift for a regime that had previously shunned dialogue offers from Seoul. President Moon Jae-in quickly welcomed the move, and said he will coordinate with the international community as he pursues peace talks.

Kim’s speech on Jan.1st was the most promising peace overture from North Korea since President Donald Trump took office and began ratcheting up pressure with increased sanctions and threats of war. Yet it will also test the strength of the U.S.–South Korean alliance, which became strained at times last year over the best way to halt North Korea’s nuclear threat.

“It’s a positive message that now puts the ball in Seoul and Washington’s court,” said Duyeon Kim, a visiting senior fellow at the Seoul-based Korean Peninsula Future Forum. “Kim focused a lot on improving North-South relations, which increases the chances of trying to drive a wedge between the allies, so it will be important for Seoul to keep Washington in the loop every step of the way and coordinate with the U.S. going forward.”

While Moon said South Korea would talk with no preconditions, the U.S. has repeatedly said that it can’t speak directly with North Korea until it’s willing to get rid of its nuclear weapons. Kim made clear on Monday that wouldn’t happen: He called North Korea’s nuclear deterrent “irreversible,” claimed the entire U.S. was in range and vowed to build more atomic warheads.

“It’s reality, not a threat, that the nuclear button is always on my desk,” Kim said, adding that he would only use the weapons if North Korea was threatened. “The U.S. can never start a war against myself and our nation now.”

Last year, North Korea conducted more than a dozen ballistic missile tests and detonated its sixth and most powerful nuclear device. South Korea assessed that a new intercontinental ballistic missile fired in November could potentially reach Washington, though additional analysis was needed to determine whether it was capable of re-entry into the Earth’s atmosphere.

Kim’s mention of the “button” on his desk was designed to show that North Korea’s weapons can be deployed now even as questions remain, according to Koh Yu-hwan, who teaches North Korean studies at Dongguk University in Seoul and heads an advisory group for the presidential National Security Council.

“Kim seemed to fear that further missile tests could prompt the U.S. to take a military option,” Koh said. “By suggesting a peaceful coexistence with the U.S., Kim’s trying to reverse the direction of the broader picture.”

The Winter Olympics in Pyeongchang, about 50 miles (80 kilometers) from the North Korean border, provide an opportune occasion to reduce tensions. Moon has repeatedly urged North Korea to participate, and Kim said on Monday that “we sincerely hope the games will be successful.”

“It’s about time that the North and the South sit down and seriously discuss how to improve inter-Korean relations by ourselves and dramatically open up,” Kim said. He added that officials from both countries should “urgently meet” to discuss the possibility of North Korea sending a delegation to the Olympics.

Kim made one longstanding demand during his speech: that South Korea halt all military exercises with U.S. forces. Moon has already signaled some flexibility on this point, telling NBC last month that he’s asked the U.S. to postpone annual drills until after the Olympics.

During the talks, North Korea may look for other concessions to participate in the Olympics, such as lifting sanctions, resuming economic cooperation and providing humanitarian aid, according to the Institute for National Security Strategy, a group affiliated with South Korea’s National Intelligence Service.

The United Nations Security Council last month approved its strongest sanctions yet on North Korea — a move that Pyongyang described as an “act of war.” The country is prohibited from exporting goods like seafood, coal and textiles, and has seen curbs on the amount of oil it’s able to import.

Last year Trump engaged in a war of words with Kim, with the two leaders trading insults through the media. Even so, Trump floated the idea of friendship with Kim on occasion, and has called on him to “make a deal” on North Korea’s nuclear and ballistic missile programs.

While Kim’s speech provides an opening, a lasting resolution remains far away. The U.S. in particular has said it will never accept North Korea as a nuclear power, and the Trump administration has said military action is possible to prevent it from acquiring a credible nuclear threat.

The U.S. and North Korea will “zero in on each other’s actions and comments closely to determine their next moves,” she said. “It is important that both sides continue practicing restraint and sending positive signals.”