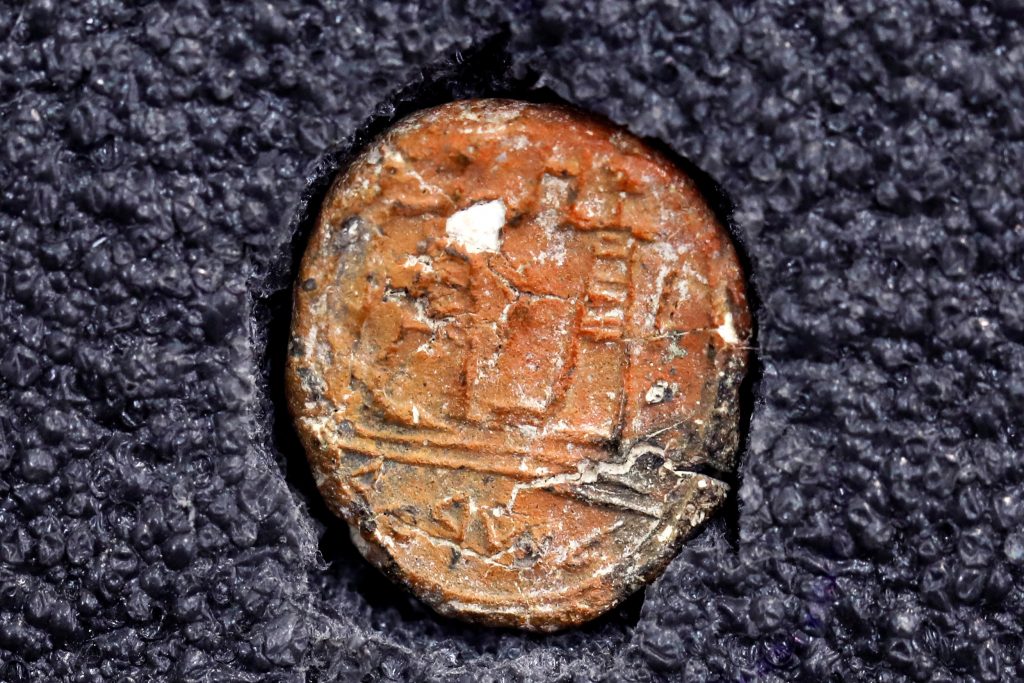 A unique stamped piece of clay from the Bayis Rishon Period, inscribed in ancient Hebrew script, was unearthed in the Israel Antiquities Authority (IAA) excavations in the Kosel Plaza and was unveiled on Monday.

The important find was discovered over the course of the IAA’s excavations at the site.

According to the excavator, Dr. Shlomit Weksler-Bdolach, “the Nach mentions two governors of Yerushalayim, and this finding thus reveals that such a position was actually held by someone in the city some 2,700 years ago.”

This extraordinary find is a lump of clay, stamped and pre-fired. The upper part of the sealing depicts two figures facing each other, and the lower part holds an inscription in ancient Hebrew script.

The seal, its use unknown, was retrieved by Shimon Cohen while wet-sieving the soil from a late Bayis Rishon-period building (seventh-sixth centuries BCE).

Speaking on behalf of the IAA, Weksler-Bdolach said she believes that “the seal had been attached to an important transport and served as some sort of logo, or as a tiny souvenir, which was sent on behalf of the governor of the city.”

“It is likely that one of the buildings in our excavation was the destination of this transport, sent by the city governor. The finding of a seal with this high-rank title, in addition to the large assemblage of actual seals found in the building in the past, supports the assumption that this area, located on the western slopes of the western hill of ancient Yerushalayim, some 100 meters [30 feet] west of Har HaBayis, was inhabited by highly ranked officials during the Bayis Rishon period.”

Hebrew University’s Professor Tallay Ornan and Tel Aviv University’s Professor Benjamin Sass, studied the sealing and describe it: “Above a double line are two standing men, facing each other in a mirror-like manner. Their heads are depicted as large dots, lacking any details. The hands facing outward are dropped down, and the hands facing inward are raised. Each of the figures is wearing a striped, knee-length garment. In the register beneath the double line is an inscription in ancient Hebrew, with no spacing between the words and no definite article.”

“It is very overwhelming to receive greetings from Yerushalayim from the Bayis Rishon era,” Mayor Nir Barkat said upon seeing the seal. “This shows that already 2,700 years ago, Yerushalayim, the capital of Israel, was a strong and central city.

“Yerushalayim is one of the most ancient capitals of the world, continually populated by the Jewish people for more than 3000 years.

“Today we have the privilege to encounter another one of the long chain of persons and leaders that built and developed the city. We are grateful to be living in a city with such a magnificent past, and are obligated to ensure its strength for generations to come, as we daily do.”