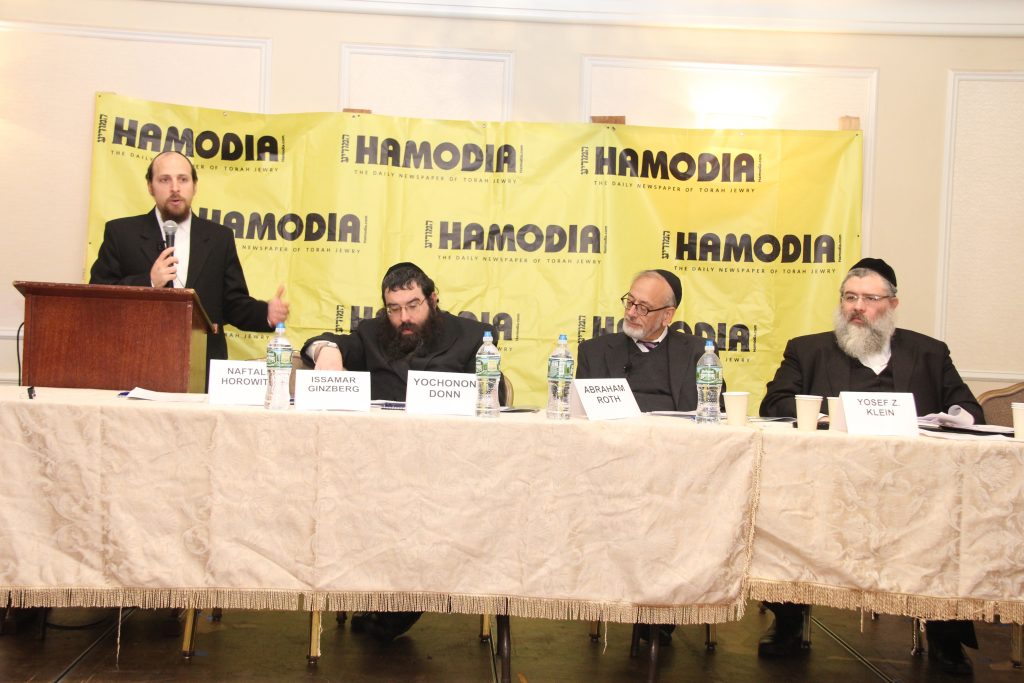 Following on the heels of the well-received Hamodia City Council debate which took place at the end of last October, Hamodia Events once again brought hundreds of people together on Sunday for an event designed to raise the level of discourse about pressing issues affecting the community, this time in the financial realm.

A large, eager crowd turned out despite the below-zero-windchill weather and filled the Anshe Sfard Simcha Hall on 45th street to overflow capacity for the event, which began shortly after 2. The event was billed as a special financial seminar that would address the new tax bill passed by the Republicans and signed by President Trump shortly before the end of 2017; as well as the bitcoin and cryptocurrency craze sweeping the world. Participants were greeted by a table laden with light refreshments at the entrance as they headed inside for the seats, which rapidly filled up.

Hamodia’s political editor, Rabbi Yochonon Donn, opened the proceedings with a quick overview of the tax systems mentioned in the Torah and employed throughout the generations, praising the U.S. system which the seminar was about to shed further light on. With that, he handed the floor over to Mr. Abraham (Abe) Roth, co-managing partner at Roth & Co., a prominent local accounting firm. Mr. Roth led the tax team giving the presentation. A 12-page handout outlining the subjects covered was also provided in advance to the participants.

Following a brief overview of the history of the U.S. tax code, Mr. Roth handed the microphone over to Mr. Shulem Rosenbaum, senior manager at Roth & Co., who spoke for close to 20 minutes on the intricacies of how the new tax law would affect taxpayers beginning in 2018. At one point, he acknowledged State Senator Simcha Felder, who was in attendance, for his efforts in the State Senate on a bill that would issue tax credits to New Yorkers who would suffer a loss due to the elimination of the state and local taxes (SALT) deduction. (Mr. Felder later took the microphone briefly to stress his conviction that these efforts won’t be for naught and some corrective measure will be coming out of Albany soon.) He also noted the contribution of U.S. Senators Marco Rubio, Mike Lee and Tim Scott to the final tax bill which doubled the child tax credit from $1,000 to $2,000 and made $1,400 of that refundable to low-income families.

Mr. Rosenbaum was followed by his colleague, Mr. Yosef Z. Klein, senior manager at Roth & Co., who expounded on the myriad changes affecting how businesses will pay taxes.

This was followed by a 25-minute question-and-answer segment. One point made by Mr. Rosenbaum in response to a question was that the promise to simplify the tax code famously expressed as “paying one’s taxes on the back of a postcard” had gone far from fulfilled, and matters, in his view, had only gotten even more complicated now. Another point touched on was a number of changes that actually already affect the 2017 tax year. Mr. Rosenbaum also notably offered up a mini-discourse on the broad long-term economic impact that tax cuts have on the economy.

With that, at the end of nearly an hour and a half, the longer tax segment of the event came to a conclusion. Then, the discussion about bitcoin, which many in the audience eagerly anticipated, began.

Rabbi Issamar Ginzberg, renowned marketing strategist and Hamodia columnist, gave a characteristically lively and humorous 20-minute presentation, punctuated by some attention-grabbing visual gags, laying out in brief how bitcoin works. He also gave some insight into psychological factors that, in his view, are contributing to the popularity of bitcoin and other cryptocurrencies. In sum, his experience and understanding led him to the conclusion that bitcoin is short on substance and large on flash and glitz that are enticing many to jump onto something they don’t quite understand.

Mr. Naftali (Mark) Horowitz, managing director and financial advisor at J.P. Morgan, followed, and spoke in even starker terms about what he deemed a scam in the tradition of many schemes and cons that have befallen the world at large and the frum community in particular. He cautioned against the human tendency of confirmation bias, seeking information that only confirms a rosy view of reality without taking opposing views into account. And he insisted that to purchase bitcoin, with no product or revenue stream behind it, cannot be deemed an investment but is mere speculation, akin to seeking profits through gambling. He called for potential investors to follow the example of Warren Buffett or JPMorgan Chase CEO Jamie Dimon, who have both said purchasing bitcoin is a bad idea, and advised, instead, to pursue sound, long-term investments.

With that, the event concluded and the crowd broke for Minchah before heading home with their newfound financial knowledge and insight.

The educational handouts that were distributed at the seminar are available by emailing taxbill@hamodia.com