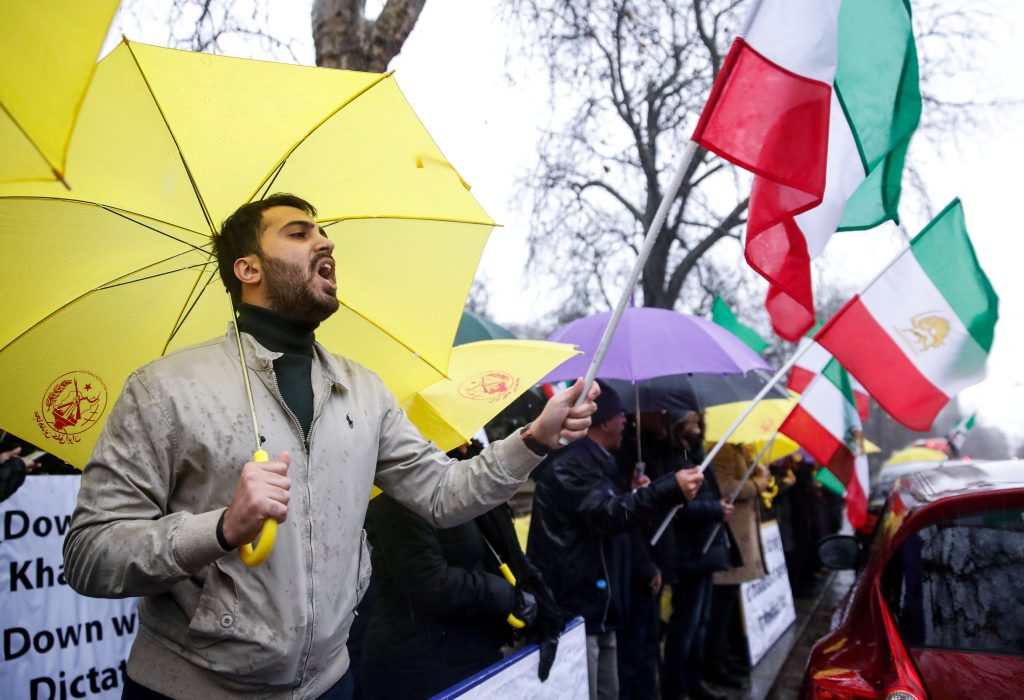 The largest protests to strike Iran in nearly a decade continued unabated Sunday, despite a government move to block access to Instagram and a popular messaging app used by activists to organize, with even President Hassan Rouhani acknowledging the public’s anger over the Islamic Republic’s flagging economy.

Rouhani and other leaders made a point to warn that the government wouldn’t hesitate to crack down on those it considers lawbreakers amid the demonstrations, which began Thursday over the economic woes plaguing Iran.

“Those who misused cyberspace and spread violence are absolutely known to us and we will definitely confront them,” Iranian Interior Minister Abdolreza Rahmani Fazli said on state media.

The outpouring of public discontent, the most widespread since protests following Iran’s disputed 2009 presidential election, have been fanned by messages sent on a messaging app, which authorities blocked Sunday along with other social media.

Many in Iran are learning about the protests and sharing images of them through a mobile-phone messaging app popular among the country’s 80 million people. On Saturday, the app shut down one channel of the service over Iranian government allegations that it encouraged violence, something its moderator denied.

On Sunday, the app CEO Pavel Durov wrote on Twitter that authorities had blocked all access to the app.

“Iranian authorities are blocking access to [app] for the majority of Iranians after our public refusal to shut down … peacefully protesting channels,” he wrote.

Iran’s state TV news website, iribnews.ir, said that social media in Iran was being temporarily limited as a safety measure.

Meanwhile, authorities acknowledged the first fatalities in the protests, during clashes late Saturday in Doroud, some 200 miles southwest of Tehran in Lorestan province, where protesters had gathered for an unauthorized rally, said Habibollah Khojastepour, the security deputy of Lorestan’s governor.

“The gathering was to be ended peacefully, but due to the presence of the (agitators), unfortunately, this happened,” Khojastepour said.

He did not offer a cause of death for the two protesters, but said “no bullets were shot from police and security forces at the people.”

However, the reformist Etemad newspaper quoted Hamid Reza Kazemi, a Lorestan lawmaker, as saying police did open fire during the clashes.

“If someone comes to the street and acts like a norm breaker, what would you do?” the newspaper quoted Kazemi as saying.

Videos circulating on social media late Saturday also appeared to show fallen protesters in Doroud as gunshots sounded in the background. The Associated Press could not immediately verify the footage.

Thousands have taken to the streets of cities across Iran, beginning on Thursday in Mashhad, the country’s second-largest city and a holy site for Shiite pilgrims.

The protests in the Iranian capital, as well as President Donald Trump tweeting about them, raised the stakes. It also apparently forced state TV to break its silence about the unrest, acknowledging Saturday that it hadn’t reported on the protests on orders from security officials.

Mr. Trump, whose travel bans have blocked Iranians from getting U.S. visas, again tweeted about the protests Sunday.

“The people are finally getting wise as to how their money and wealth is being stolen and squandered on terrorism. Looks like they will not take it any longer,” Mr. Trump wrote. “The USA is watching very closely for human rights violations!”

“This guy in America who wants to sympathize with our people today has forgotten that he had called Iranian people ‘terrorists’ a few months ago,” Rouhani said. “This person who is against Iran from head to toe does not have the right to be sympathetic to Iranian people.”

Later Sunday, Mr. Trump tweeted, “Iran, the Number One State of Sponsored Terror with numerous violations of Human Rights occurring on an hourly basis, has now closed down the Internet so that peaceful demonstrators cannot communicate. Not good!”

Several hundred protesters have been arrested so far, beginning with over 50 in Mashhad on Thursday. The semi-official ILNA news agency reported Sunday that authorities had arrested some 80 protesters in the city of Arak, some 175 miles south of Tehran, as well as another 200 in Tehran on Saturday night.

State TV also has reported that some protesters invoked the name of the U.S.-backed shah, who fled into exile just before Iran’s 1979 Islamic Revolution and later died.

Iran’s economy has improved since its 2015 nuclear deal with world powers, which saw Iran limit its enrichment of uranium in exchange for the end of some international sanctions. Tehran now sells its oil on the global market and has signed deals to purchase tens of billions of dollars’ worth of Western aircraft.

That improvement has not reached the average Iranian, however. Unemployment remains high, and official inflation has crept up to 10 percent again. A recent increase in egg and poultry prices by as much as 40 percent, which a government spokesman has blamed on a cull over avian flu fears, appears to have been the spark for the economic protests.

While the protests have sparked clashes, Iran’s hard-line paramilitary Revolutionary Guard and its affiliates have not intervened as they have in other unauthorized demonstrations since the 2009 election.

Some analysts outside of Iran have suggested that may be because the economic protests initially just put pressure on Rouhani, a relative moderate whose administration struck the nuclear deal.

While saying people should be allowed to protest, Rouhani also made a point Sunday of issuing a warning to demonstrators.

“The government will definitely not tolerate those groups who are after the destruction of public property or disrupting the public order or sparking riots in the society,” he said.