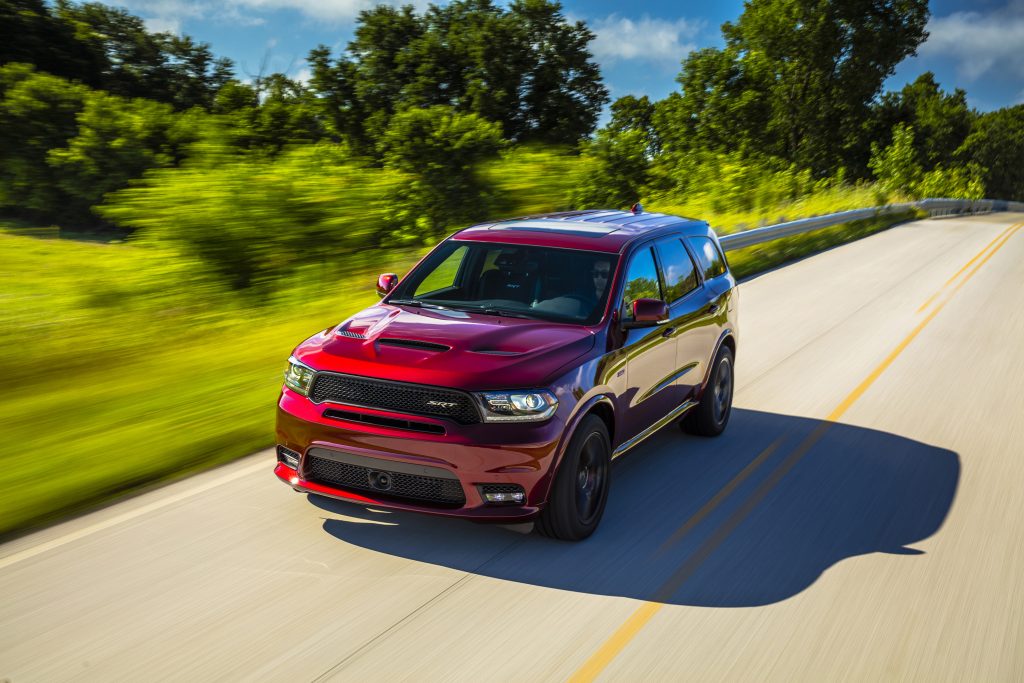 Let’s start with the elephant in the room: Less than 10 mpg. We drove the 2018 Dodge Durango SRT how most people would drive a three-row SUV, toting the kids around town, making the occasional highway commute, rumbling 392 cubic inches of fire-breathing V-8 engine monstrosity into the school drop-off area. And we got the fuel economy of a semi.

The other elephant in the room? The Durango SRT is a guilty pleasure unlike anything else on four wheels.

Most of the week these elephants of conscience were riding on my shoulders, one dirty and abject, the other shameless in granite metallic. All new for 2018, this wicked performance SUV will never be mistaken for a substitute minivan. The mesh grille is crowned with a domed hood flanked by twin vents to let cool air in and hot air out. See it in the rear view mirror and the lead car will automatically veer to the right lane out of self-preservation. Then watch those 4-inch twin tailpipes burn twin holes in the sky.

There is only reason why this vehicle exists: because it can.

Just because it can, however, doesn’t mean it should.

Take conflicted elephant man exhibit A: Driving calmly home down my quiet suburban side street, I stop to chat with my neighbor. “Could hear you coming a mile away,” he half-smiled, knowing I’d only have the beast for a week. Dodge’s response to what other people think? “Don’t care.”

There’s something admirable in that, something deeply American in that.

But a three-row SUV? There is no shortage of performance crossovers, though none as large as the 5,510-pound Durango SRT. And because it is classified as a light truck under our near 40-year-old fuel economy code, there is no gas-guzzler tax. Have the cake, says Dodge, and eat it, too. All the cake.

If you’re willing to pay $63,000, you too can tell the world off. There’s something admirable in that, too, and something deeply, deeply American.

For that price, the Durango comes loaded with 20-inch wheels wrapped in Pirelli all-season tires, high performance suspension and exhaust, and, most importantly perhaps, performance Brembo brakes. I tracked it for a lap or two, and it’s surprisingly nimble and sure-footed despite the high remove from the road. The SRT people are wizards.

It comes with interior comforts that don’t matter on a track, such as heated everything, second-row captain’s chairs and FCA’s excellent UConnect system with 8.4-inch touch screen. To get best-in-class towing capability of 8,700 pounds, which comes with a real 20-inch spare wheel, it’ll cost another $995. Why shouldn’t your performance SUV tow four tons too?

No one should be talking about “need” when it comes to the Durango SRT. The 6.4-liter V-8 churns out a whopping 470 pound-feet of torque to all wheels to help launch all three rows to 60 mph in just 4.4 seconds.

Therein lies conflicted elephant man exhibit B: This thing hauls. All 5,510 pounds of it.

And it does it with a shrug. The eight-speed automatic makes it effortless, which intensifies the temptation to let it rip. The engine rumbles through chest and cabin equally, then roars as it swallows up pavement.

In some nutty dystopia, where elephants of conscience don’t exist, where fuel is plentiful but the Earth is torched, maybe the Durango SRT provides peace of mind for drivers who don’t give a hoot. But for now, while there’s still a chance for redemption, this beast is overkill.

Parting shot: Because you can, I guess.