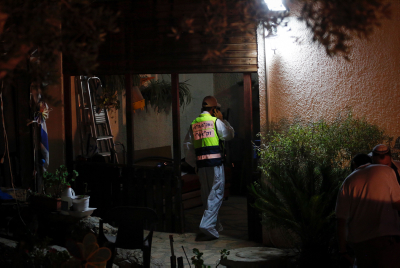 The state opposes the total demolition of the home of the family of Omar Abd al-Jalil, the terrorist who in July murdered three members of the Salomon family, Hy”d, in their home in the Binyamin town of Chalamish. The report on Army Radio Thursday said that the state believes that the demolition of the first floor of the house in the village of Kubar, just a few hundred meters from Chalamish, which took place in August, was sufficient.

Al-Jalil was convicted on three counts of murder for his actions last July, when he marched to the town on a Friday night and murdered three members of the Salomon family. Five other members of his family were also sentenced to various prison sentences for assisting the terrorist, or for inciting violence after the attack. Al-Jalil’s father was sentenced to two months in prison, his mother got a month in prison, and three other family members were convicted and given suspended sentences.

The state made its position known in opening arguments in a petition brought by members of the Salomon family, demanding that the IDF completely demolish the home. The petition says that as all members of the family were involved in carrying out or supporting the attack, they were “eligible” to have their home demolished.

The law, according to the petition, empowers the IDF to demolish the entire home and confiscate the land it is built on if the members of the family were involved in the attack – which was the case in the Salomon murders. “If the murdered cannot respond to the crime committed against them, we, the living, can, and our actions can discourage cruel and destructive terrorism. The demolition of the home will bring at least some comfort, in that it will discourage others from acting in the same way,” the petition said.

Speaking to Yediot Acharonot, Michal Salomon, widow of Elad Salomon, Hy”d, one of al-Jalili’s victims, said that she advocated not just for home demolition, but for the death penalty for terrorists. “For so many years, we have been sending terrorists to prison, even for lifetime sentences, and it has not deterred other terrorists from committing attacks,” she said. “Nothing will bring back our loved ones. The purpose here is not to satisfy our feelings, but to prevent the next murder. After so many years of ineffective jail sentencing, we believe it is time to try the death penalty.”

In the attack, Al-Jalili walked from his village to Chalamish and carried out the attack, murdering three people – Yosef Salomon, his daughter Chaya Salomon, and his son Elad.