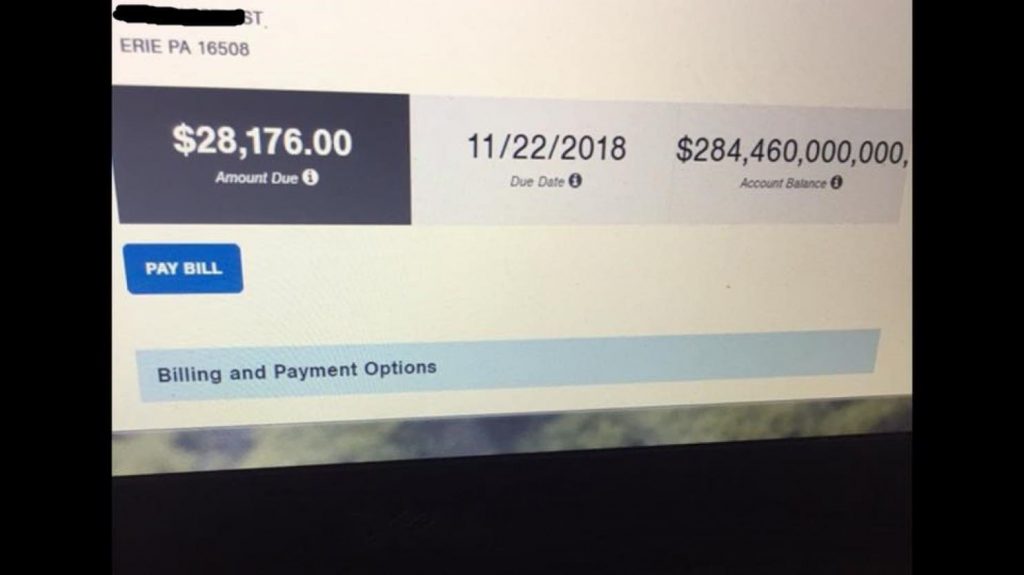 You could own all of Netflix. Or purchase 747 Boeing 747s, with change to spare. Or erase the national debts of Venezuela, Nigeria, Peru and Iceland, combined.

Or, if you’re Mary Horomanski, you could pay for one month’s worth of electricity.

Horomanski, from Erie, Pennsylvania, was shocked recently when she received an erroneous electric bill displaying an account balance of “284,460,000,000,” with a first payment due of $28,176.

“I opened it up and there it was,” she told The Washington Post.

Horomanski, 58, began counting the commas (“Hundreds. Thousands. Millions. Billions . . . Can most people even count that high?”), then taking her glasses off and putting them on again.

“It wasn’t due until November of 2018,” she said. “It was like, well, I guess we have a year to come up with this billion-dollar bill.”

Horomanski’s husband and one of her sons were home with her when she checked her bill online, and they began asking if she was okay.

“I’m looking around the room and they’re looking at me now, ’cause I’ve got this funny look on my face,” Horomanski recalled Tuesday. “When you see something like that, your heart starts beating, you break out into a little sweat, like, ‘What on earth just happened?’ ”

In a brief moment of self-doubt, the stay-at-home mother of five boys also took stock of the electricity her household was using.

Horomanski texted an image of the bill to her oldest son, who immediately contacted Penelec, their electric company.

The company quickly reassured him it was an error, Horomanski said.

The correct amount was $284.46 – still a little high, to be honest, compared to the previous month’s bill of $161, Horomanski thought. But at least not a figure that threatened to send her into cardiac arrest.

She also sent a picture of the bill to her local newspaper, the Erie Times-News, which wrote about the mistake in a story that went viral.

“I can’t recall ever seeing a bill for billions of dollars,” Durbin told the newspaper. “We appreciate the customer’s willingness to reach out to us about the mistake.”

Horomanski said she’s been receiving text messages from friends telling her that her surreal electric bill has appeared in the likes of Time magazine and the New York Post.

In retrospect, there was something universally relatable about the mistaken bill, along with the cold horror Horomanski felt at the thought of how much worse it could have been.

“My son Mike and I were both saying, almost simultaneously, ‘Holy bologna, could you imagine if I had that automatic payment and it just came out of the account?’ ” she said. “I could not stop thinking about this.”