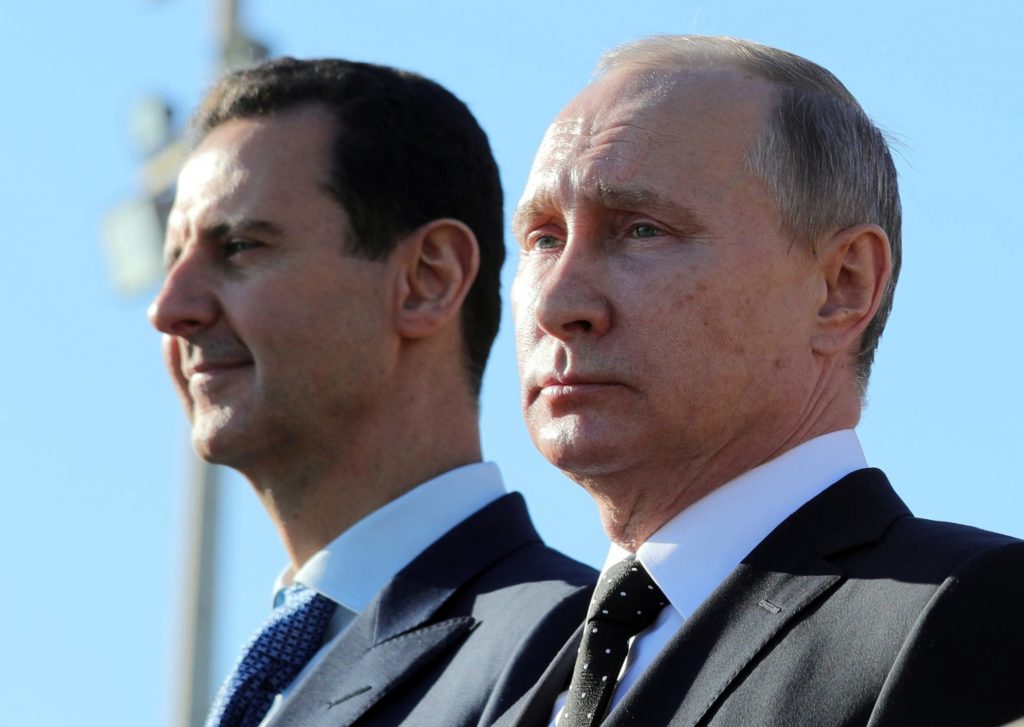 In a series of statements, 40 rebel groups, including some of Syria’s most prominent, as well as political opposition groups, said the talks expected next month are an attempt to “circumvent” the U.N.-led process, which has made virtually no progress since it began in 2014.

The rebel groups said Moscow has asked them to give up their demand for Assad to step down.

“We reject this, and we affirm that Russia is an aggressor that has committed war crimes against Syrians,” the statement signed by 40 rebel groups said. “Russia has not contributed with a single move to alleviate the suffering of the Syrian people and it has not pressured the regime it claims it guarantees to move an inch toward any real path toward a resolution.”

The rebel groups, including Ahrar al-Sham, Army of Islam, and a number of western and regionally-backed Free Syrian Army groups, said they are committed to the U.N.-led Geneva process, and called on the international community to end the bloodshed, now in its seventh year. Political opposition groups and governing bodies in rebel-held areas have also rejected Russia’s proposed talks.

The talks are scheduled for Jan. 29-30 in Sochi, and were announced after talks among Russia and Iran, which back the government, and Turkey, which supports the opposition.

Syria’s government said it would attend the talks. Assad told reporters recently that the Sochi talks have a clear agenda of discussing new elections and possibly amending the constitution.

The fate of Assad has been the main point of contention in all previous rounds of talks. The opposition has long called for a transitional period in which Assad would have no role, something the government refuses to even consider.

The Sochi talks would open up a fourth track of talks between parties to the complex conflict. The U.N.’s own Geneva program has been supplemented by “technical” talks in Astana brokered by Russia, Iran and Turkey.

Russia periodically opens a third track through Cairo. Egypt has provided a base for Syrian reformists seen as acceptable to the Damascus government.

It’s not yet clear who will attend the Sochi talks.

Turkey has said the Syrian Kurdish group known as the PYD, which governs around 25 percent of Syria’s territory and wants autonomous rule, should not be invited. Russia said last week that Kurdish representatives would attend, but that it would not invite the PYD.

In a statement, the self-administration of northeastern Syria, where the PYD is dominant, said the authority and not individual parties should be represented at the Sochi talks. The PYD is the major political arm of the U.S.-allied Kurdish militias that played a major role in defeating the Islamic State group. Ankara views the group as an extension of the Kurdish insurgency raging in its southeast.

Highlighting its close ties to the Syrian government, Russia on Tuesday moved ahead with plans to lease a naval base in Syria for an additional 49 years.

The upper chamber of the Russian parliament voted to extend Russia’s lease of the Mediterranean base at Tartus, the last step before President Vladimir Putin’s expected signature.

Russia’s air campaign in Syria, which began in September 2015, helped turn the tide of the civil war in favor of Assad. Earlier this month, Putin announced a partial pullout of troops from Syria, but Russia is determined to maintain its military presence there.

Localized cease-fire agreements brokered by Russia, Iran and Turkey have reduced the violence across much of Syria, but the government has kept up pressure on insurgents on the outskirts of Damascus and in the northwestern rebel-held Idlib province.

The Britain-based Syrian Observatory for Human Rights said at least 20 people have been killed since Monday in airstrikes in southern Idlib, where the government is waging its first major ground offensive in years. The Observatory and the Syrian Civil Defense said that in the past 24 hours, government aircraft have dropped dozens of barrel bombs in the area, an indiscriminate weapon that has killed thousands over the course of the civil war.

The Observatory and rebel groups said a Syrian trainer jet was shot down Tuesday in eastern Hama, south of Idlib. Syria’s state news agency SANA confirmed that a military jet crashed in the northern suburb of Hama after “terrorist groups” fired on it. It said the pilot was killed.

Rebel groups issued competing claims of having downed the plane. The Observatory said the plane was shot down near Um Harytan, in northeastern Hama.