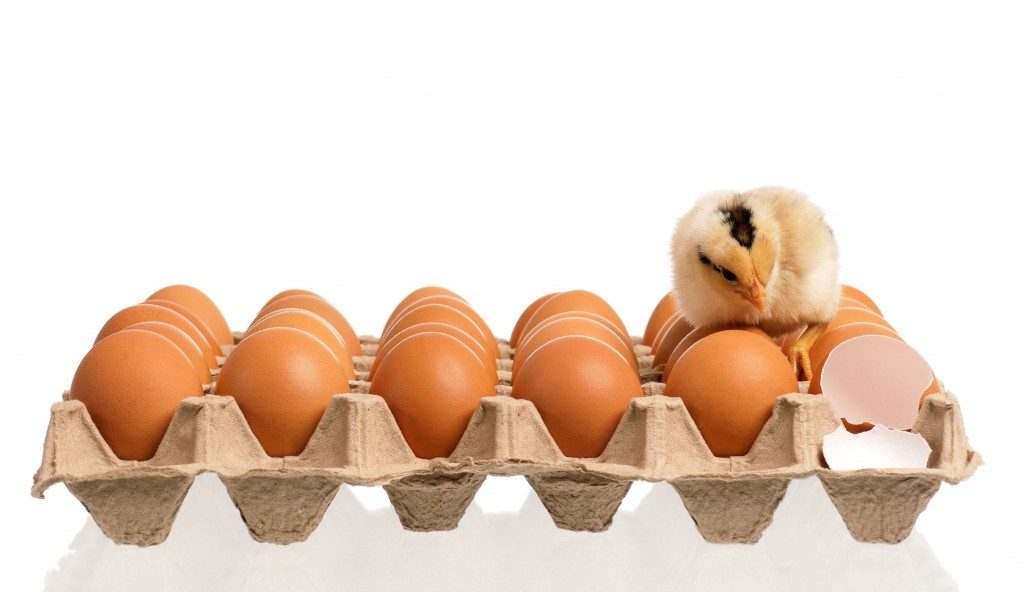 I like animals. I always have. We currently have two African grey parrots, one caique, one lovebird, and fish (both freshwater and saltwater). In the past, we had a multi-generational family of rabbits living in our yard, as well as some goats (dwarf variety). My interest in Hashem’s many creatures was evident when I was a child. My parents were decidedly not pet people, so I never had a dog, but fish, birds, frogs, salamanders and hamsters did color the years of my childhood.

Now you’ll understand why I once took a raw egg out of the fridge and put it in the microwave. Youthfully impetuous and naive, I figured, “How do chicken eggs hatch? The hen sits on them and her warmth enables the chick to develop. So, if I just microwave this, I can fast-track the process.”

“Within a few minutes,” I thought, with mounting excitement, “I am going to be the proud owner of my very own, self-hatched chick!”

My excitement popped into an anticlimactic nadir of utter disappointment when I suddenly heard a loud “POP!” emanating from said microwave. To the utter horror of my nine-year-old self, I discovered that, instead of producing a cute, fluffy critter, the egg had exploded, leaving its gooky, gooey goop over every possible square millimeter of that radioactive box. Excitement supplanted with terror, I was overcome with one singular concern: my mother cannot see this mess. I worked hard. Although I’m currently unable to recall how the microwave looked post-cleaning, judging from my own kids’ attempts at clean-up, which fluctuate greatly according to their motivation level (think: “No-one is getting dessert until the table is cleaned up…”), I would guess that it was spotless.

Surprisingly, my failed childhood experiment touches on a conundrum of contemporary scientists. Most people know that if you want to microwave a whole potato, for example, you need to pierce its skin with a fork. Otherwise, steam can build up to the point of explosion. You’d think eggs function much the same way, but, as it turns out, they don’t. And it’s something of a scientific mystery. Consider the following quote from a December 6 LiveScience article (“Why Microwaved Eggs Explode”):

“A hard-boiled egg doesn’t have a skin with the high tensile strength of a potato’s [that would allow steam pressure to build up inside] …There is a membrane that might allow pressure to build up, but that comes off when you shell an egg, and shelled eggs still pop.”

And here is what researchers theorize may be the explanation behind this egg-popping phenomenon:

Water, when it reaches a certain temperature, becomes steam. However, proteins inside the egg trap the water into tiny pockets, the pressure forcing the water to remain in a liquid state. But when the egg is disturbed and one of the protein cases is ruptured, its pocket of liquid bursts out as steam, disrupting the surrounding tissue and allowing the other pockets of liquid to instantly become steam as well. This chain reaction tears the egg to bits, effectively exploding it.

Mussar greats have told us that we should have pockets in our heart — a pocket for joy, a pocket for sadness, and so on — opening up each pocket when appropriate, while keeping the other pockets closed.

But what about when the “emotion-pockets effect” goes awry? For example, have you ever had a tense interaction with someone that suddenly turned explosive? Bewildered, you’re left wondering, “What just happened here?” You just can’t understand how the explosive reaction was warranted. Well, it just may be that what you were privy to was not an explosion, per se, but an egg-popping effect. As the researchers put it, “To an observer, the egg appears to have exploded, but it is probably more accurate to describe the phenomenon as a rapid boiling of superheated water.” Quite possibly, the explosive reaction you witnessed was not really about that specific issue, but that the burst pocket of emotion triggered a chain reaction of other exploding emotion pockets that have nothing to do with you at all. So what? Well, it can make all the difference in the world. Interpersonal blow-ups tend to cause people to throw in the towel, to just give up on making sense of the issue or amends. But, if you bear in mind that, often, blow-ups really aren’t that as much as unfortunate “rapid boiling” chain reactions, then it becomes that much easier to re-engage and restore a happy equilibrium.