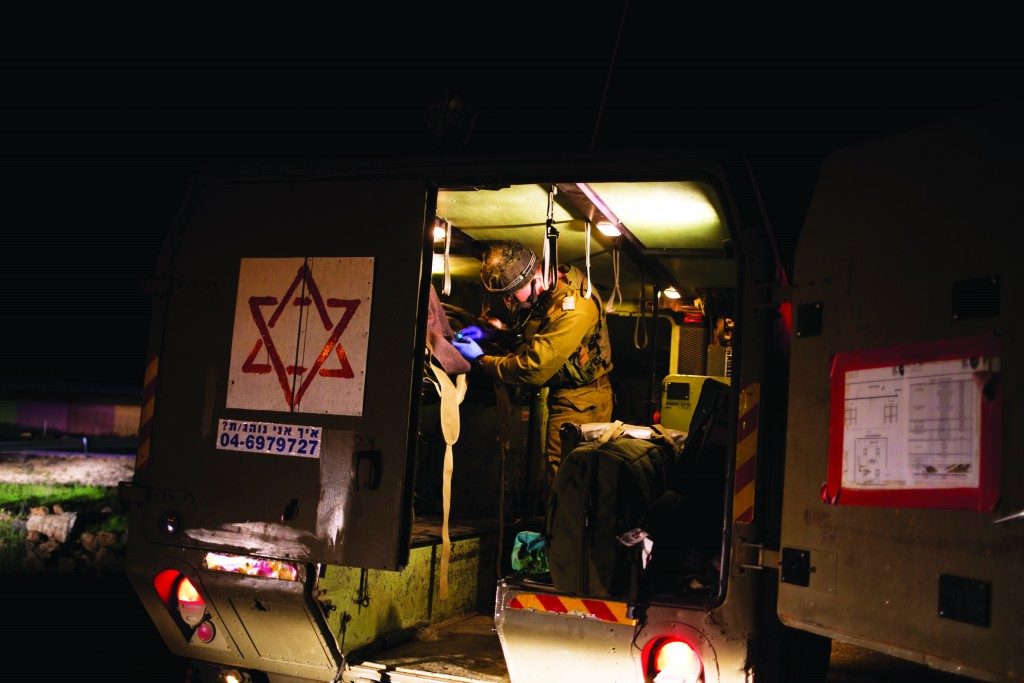 Interior Minister Rabbi Aryeh Deri’s phone rang this past Erev Shabbos with an urgent request. On the line was an official from the Israeli Foreign Ministry asking for entry permits for a 2-day-old baby from Cyprus and one of his parents.

The baby, born in a refugee camp in Cyprus where his parents had fled to escape the Syrian civil war, was diagnosed with a life-threatening heart defect that the Cypriots were unable to treat.

It goes without saying that Rabbi Deri immediately gave his approval and within hours the baby and a parent were being airlifted to Israel for emergency surgery at the Sheba Medical Center in Tel Hashomer.

The story didn’t get much coverage, for two reasons. One, it happens all the time. It’s “dog bites man,” which doesn’t make news. Two, because the international aid agencies and media that attack Israel for its “human rights violations” don’t want to “ruin” the image of Israel as a cruel oppressor that they have meticulously honed over the years.

But this one refugee baby isn’t the story. It’s the more than 5,400 Syrian wounded and sick that Israel has treated during the course of a civil war that has killed hundreds of thousands and left millions homeless. Israeli army field hospitals on the Israel-Syrian border were recently replaced with more permanent structures that offer emergency rooms, X-ray machines, maternity wards and operating theaters for minor surgery. Conditions or wounds requiring more serious surgery are sent to Tzfas. The most severe are sent to Rambam Hospital in Haifa.

No effort or expense is spared to save the life of a Syrian. A study by Israeli medical officials a few years ago showed that the vast majority of Syrian children being treated in Israeli hospitals carried “superbugs,” virulent strains of bacteria, germs and viruses that are unknown to Israeli children — and are in many cases resistant to antibiotics. The only way they can be treated, the study says, is to isolate them in their own rooms at hospitals.

With the limited number of rooms in hospitals, this has meant turning away Israeli children. But that’s what was done in order to save the Syrians.

The aid comes with no strings attached. No attempt is made to cull intelligence information from any of the wounded. It’s humanitarian aid, pure and simple, and it isn’t limited to medical care.

Through the gates at the border, Israel sends hundreds of tons of food, medical equipment and clothing. It sends blankets for families for the freezing nights, and baby formula and pacifiers and diapers. Much of the assistance comes from international agencies, but the outlay to the Israeli army is huge.

In other words, even as the Israeli army takes military action to keep Iran from establishing a foothold in Syria — including reports of air bombings of convoys and of military installations — it devotes resources and manpower to “Operation Good Neighbor,” which provides humanitarian needs for the Syrian civilian public.

The same is true in Gaza. While the IDF fights Hamas, Islamic Jihad and other terror groups that seek its destruction, Israel sends between 800 and 1,000 trucks a day through the Kerem Shalom border crossing loaded with basic needs, from food to fuel.

The irony is that the media and international agencies that claim to want peace ignore the very activities that have a chance of overcoming hatred and breeding peace. Peace won’t come when Israel gives the Palestinians Yehudah and Shomron, or the Syrians the Golan Heights or Hamas Gaza. Peace will come when the two sides start seeing each other as human beings. Israel has obviously taken the first step in this direction, and, slowly but surely, it’s beginning to sink in.

“Israel is the only country that has done something like this with the Syrians,” a wounded Syrian man who had been brought to Israel for treatment said. “Israel is the friend of the Syrian people, a humanitarian country.”

Added a Syrian woman who had received treatment: “They [the Syrian regime] teach us that Israel is the country that hates us the most. We came and saw with our own eyes what they are giving us here. Israel is everything to us as a result of what it is giving us.”

“In this difficult situation Israel stood by our side, helped us with everything that we need,” added another woman. “We very much respect the people in Israel.”

The Trump administration announced Sunday that it negotiated a cut of $285 million from the budget of the United Nations, a move that is long overdue. The United Nations is a bloated, overpaid, unaccountable bureaucracy that has the chutzpah to vote against American interests, as in the case of U.S. recognition of Yerushalayim as the capital of Israel, and then expect Washington to keep funding it in the style to which it has become accustomed.

But, for the sake of peace, we would suggest cutting just $283 million and spending the remaining $2 million to take the representatives on a tour of what’s really happening on the border with Syria and with Gaza and elsewhere. That might do more to influence votes that are important to the United States and its good friend in the Middle East than threats to cut funding.