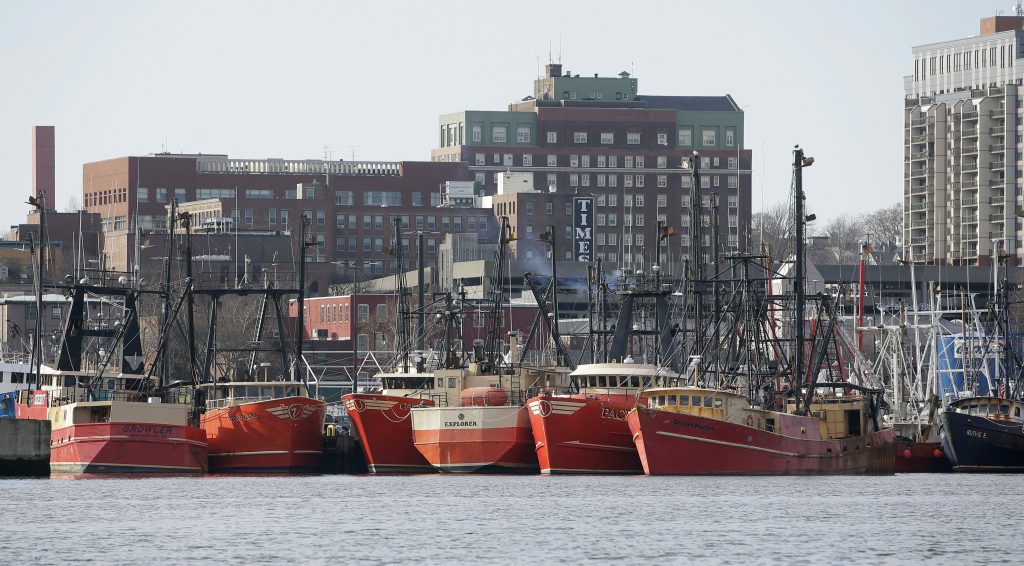 East Coast fishermen are turning a wary eye toward an emerging upstart: the offshore wind industry.

In New Bedford, Massachusetts, the onetime whaling capital, fishermen dread the possibility of navigating a forest of turbines as they make their way to the fishing grounds that have made it the nation’s most lucrative fishing port for 17 years running.

The state envisions hundreds of wind turbines spinning off the city’s shores in about a decade, enough to power more than 1 million homes.

“You ever see a radar picture of a wind farm? It’s just one big blob, basically,” said Eric Hansen, 56, a New Bedford scallop boat owner whose family has been in the business for generations. “Transit through it will be next to impossible, especially in heavy wind and fog.”

Off New York’s Long Island, an organization representing East Coast scallopers has sued the Bureau of Ocean Energy Management to try to halt a proposal for a nearly 200-turbine wind farm. Commercial fishermen in Maryland’s Ocean City and North Carolina’s Outer Banks have also sounded the alarm about losing access to fishing grounds.

Supporters of offshore wind say they have learned from Europe’s long experience with it. They also point to the more recent opening of America’s lone offshore wind farm, off Rhode Island, as evidence the actual impact to U.S. fishermen will be less than feared.

“We want to do this the right way, and I believe we have a path to do that,” said Matthew Morrissey, a vice president at Deepwater Wind, the Rhode Island company that opened that five-turbine operation off Block Island last December and is proposing larger farms elsewhere along the East Coast.

In New Bedford, where the state has already built a $113 million heavy-duty terminal to take on turbine construction and shipment, city officials envision commercial fishing and offshore wind working hand in hand to revive a region that has long lagged behind nearby Boston.

“There’s a lot more in common between these industries than pulling them apart,” said Edward Anthes-Washburn, executive director of New Bedford’s port, citing the potential for wind farms to provide fishermen with extra work and to contribute to port investments, like a new shipyard.

For fishermen, the broader concern is that offshore wind farms will only lead to more stifling restrictions.

“Fishermen are losing ground one nibble at a time,” said Joseph Gilbert, a Stonington, Connecticut fisherman who owns boats that range from Virginia to Maine. “Eventually, it adds up to a very large piece of the pie.”

It has also invested in studies looking specifically at questions raised by fishermen, from the effects of pile-driving during wind farm construction to the effect of electromagnetic fields on fish behavior, he said.

The company says it has compensated over a dozen fishermen who temporarily lost access to their fishing grounds during construction.

But while there haven’t been reports of fishing boats striking the turbines, about a dozen boats have reported trawls getting damaged by concrete structures covering undersea power cables, costing tens of thousands of dollars in equipment and lost fishing time, said Richard Fuka, president of the Rhode Island Fishermen’s Alliance.

U.S. fishermen also cast a worried glance at to Europe, where a range of restrictions have been imposed on fishing around the more than 3,500 turbines spinning off the shores of ten different countries. U.S. officials and developers stress similar bans aren’t being considered stateside, except during construction.

Studies in the North Sea suggest the turbines act as reefs, supporting mussels that draw fish and other sea life. But where advocates see biodiversity, commercial fishermen point to other studies noting modest effects on native species in Europe.

There have been at least two minor cases of fishing boats hitting turbines, he said. Fishermen largely rely on turbine platform lights as guides, but they’re not always well-maintained. The most persistent problem has been sea currents exposing buried power cables, prompting restrictions while they’re repaired, he said.

America’s slower, more complex licensing process has “forced more questions to be asked,” and East Coast fishermen seem more unified than many of those in Europe when wind farms were being developed, Jackson said.

“If fishermen can be organized and be allowed to have input into the earliest parts of the planning process, then there should be a way forward,” Jackson said.