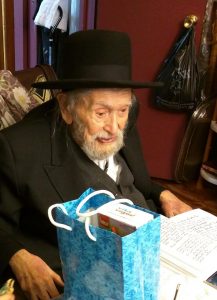 Active to the end, Reb Yehoshua Zvi Herschkowits, inventor of the Tomche Shabbos concept in the United States and founder of its Boro Park chapter, was niftar Monday, having risen from the ashes of the Holocaust to leave his mark in creating the Jewish world’s tightest social network. He was 92.

Rabbi Gluck told Hamodia by telephone as he was returning from the levayah Monday afternoon, “His trademark was, when he would see people he would ask them, ‘can I do anything for you?’”

Reb Shia was working for the United States Postal Office in 1975 when he became aware of a neighbor who could not afford to put food on his table. His desire to secretly help the neighbor led him to the shocking recognition that so many others were in his neighbor’s position but were too ashamed to seek help.

Together with a friend, he started Tomche Shabbos in his kitchen, yet it grew rapidly to help hundreds of families — more than 1,000 during Yamim Tovim. At the time of his petirah,Reb Yehoshua Zvi had about 700 people on his weekly lists.

Reb Shia put his entire life into the organization. He would oversee the distribution on Thursday night, and would then receive indigent people in his house all Friday afternoon. There was hardly a week that the Herschkowits family themselves ate regular food on Shabbos — he would invariably give it away.

“They would sometimes eat cookies for Shabbos,” Rabbi Gluck said, citing one of the sons as his source.

As the organization got bigger,  Reb Shia arranged for a team of dozens of young volunteers with cars to drive around delivering food. Early on he established a firm policy that continues until today and is copied by similar organizations — never allow the recipient to see you. Just ring the bell and run away.

Reb Shia later became the first social organization to begin giving out cards that looked like credit cards at supermarkets. That allowed beneficiaries to get help and not lose their dignity.

He established Tomche Shabbos in Boro Park, but his net of chessed was not limited by geography. As the needy of Flatbush and Queens began calling he started distributions there as well. This continued until those neighborhoods started their own Tomche Shabbos groups, which were modeled after Reb Shia’s.

Reb Shia did not allow the nearly full-time work of fundraising and distributions affect his job at the post office, never taking off a day. When he was given his own office with a personal telephone, he reasoned to Rabbi Gluck, it was to be able to better help his clients outside of office hours.

“I’m sure the reason they gave it to me was that I could work for Tomchei Shabbos,” he said.

Reb Shia accomplished so much in his life, yet refused to accept any honoraria that came with it. Even the majority of those who benefited from his largesse were unfamiliar with his name or role in Tomche Shabbos.

“I’m sorry; I’m a plain Jew,” he told a gabbai at one shul when he was given shishi, the sixth and most prestigious aliyah in many circles. “Either give me a different aliyah or I’m not going to daven here again.”

But his efforts were recognized by a select few, as Rabbi Gluck relates.

Many years ago Rabbi Gluck went to a mekubal in Yerushalayim, whose name he no longer recalls, to request a brachah.

“Are you from Boro Park?” the mekubal queried. He responded in the affirmative.

“Do you know Herschkowits?” he persisted. Rabbi Gluck said that he know many people with such a name.

“I’m referring to the one from Tomche Shabbos,” the mekubal explained. “The brachah that he can give, none of us mekubalim in Eretz Yisrael could give.”

Born in Kiraljihazo, Hungary, in 1924, Yehoshua Tzvi Herschkowits lost much of his family during the Holocaust. He himself was sent to the Dachau concentration camp in 1944 and was liberated a year later. After the war he married and started a family that eventually grew to six children, three boys and three girls.

He was extremely meticulous not to miss any of his daily shiurim, several maspidim at the levayah said, going to various shuls every day for shiurim.

The levayah was held at the Tomche Shabbos building on New Utrecht Ave. and kevurah was at the Satmar chelkah of Washington Cemetery in Deans, N.J.

He was predeceased by his wife and is survived by his children, ybl”c, Reb Chaim, Reb Dovid, Reb Moshe, Mrs. Charna Stark, Mrs. Udy Paskez and Mrs. Esther Chaya Stein