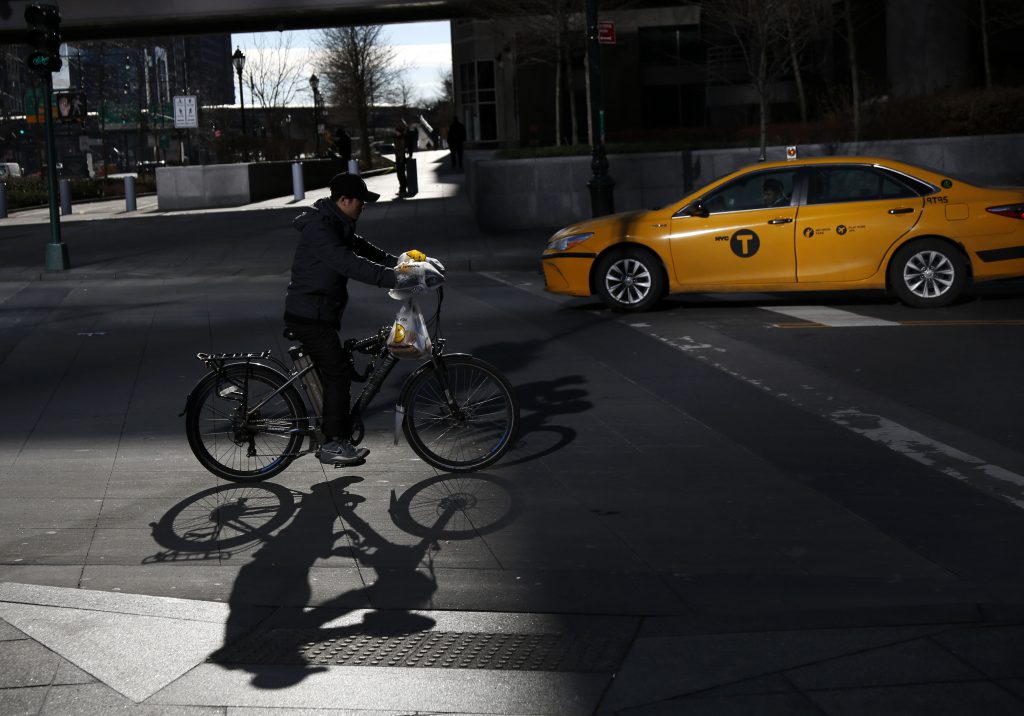 Cheap, electric bicycles have made life a lot easier for New York City’s legions of restaurant delivery workers, but the party may be over in 2018.

City officials are promising a crackdown on e-bikes, which may be loved by environmentalists and the largely poor, immigrant workforce that relies on them, but are loathed by many drivers and pedestrians who think they are a menace.

Under city law, the bikes are legal to own and sell, but riding them on the street can lead to a fine of up to $500. Democratic Mayor Bill de Blasio announced this fall that starting in 2018, businesses that have employees use the bikes are also subject to a fine of $100 for a first offense and $200 for each subsequent offense.

“Electric bikes are illegal to operate on city streets and those at the top of the food chain need to be held accountable,” city spokesman Austin Finan said. “Instead of merely targeting riders, we’re going after businesses that look the other way and leave their workers to shoulder the fine.”

That policy will undoubtedly prove popular with many New Yorkers who have complained that the bikes, which look and handle just like regular bicycles but can reach speeds of 20 mph or more, are often operated recklessly. Lots of people have stories about close calls where they stepped out into the street, only to nearly be hit by a quick-moving bike they couldn’t hear coming.

But it will be bad news for deliverymen like Clemente Martinez, who spends up to 12 hours a day in the saddle, often in lousy weather.

“It’s not fair because people like me do depend on them,” said Martinez through a translator. The 44-year-old from Puebla, Mexico, came to the United States almost 15 years ago and has been working as a delivery person almost all that time, buying his electric bicycle almost three years ago. “We’re using this as something that lets us work and support our families.”

The bikes make a tremendous difference for the delivery workforce, said Do Lee, a Ph.D. candidate who studied delivery workers for his dissertation and advocates for them. Many of the workers are middle-aged or even older, working for hours and putting in a significant number of miles to meet the demand for food and other items to be delivered quickly.

“They couldn’t do their jobs without electric bikes,” he said.

Advocates for alternate forms of transportation say the crackdown also doesn’t make sense from an environmental or safety perspective.

Gas-powered mopeds, which are faster and heavier than e-bikes, continue to be legal under state law, although they must be registered and the driver must be licensed. A business using one for deliveries also has to have insurance.

Some cycling advocacy groups have challenged the city to produce data showing whether the e-bikes pose any unusual danger compared to other vehicles.

“In the realm of enforcement, data needs to be the impetus,” said Caroline Samponaro, deputy director of Transportation Alternatives, an advocacy organization. “I don’t think enforcement is the solution to the problem we’re trying to solve.”

Federal law allows electric bicycles that go 20 mph or less to be treated as bicycles for product safety and standards, but New York state law doesn’t allow them to be registered or licensed as motorized vehicles.

Police enforcement against the bicycles has already been on the upswing, with almost 1,000 of them confiscated by police in 2017, an increase of several hundred from the year before.

While new electric bikes can go for several thousands of dollars, similar to some gas-powered scooters like Vespas, kits to convert a standard bike to an electric bike can be bought for under $500.

Elizabeth Jordan, an attorney with the Make the Road New York advocacy group, said restaurants have come to expect workers to have the bikes and require them to own and maintain them.

“They have to have these bikes in order to get these jobs,” she said. “We think that even though the policy has the intention of going after the restaurants, it will fall on the backs of the workers.”