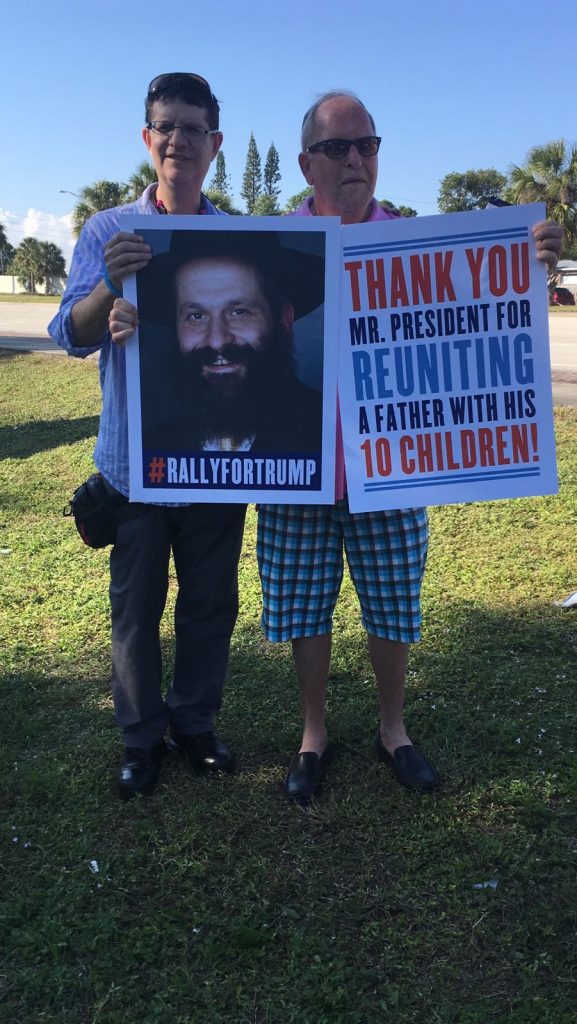 As the celebrations following Sholom Mordechai Rubashkin’s release continued unabated, thanks poured in to the man who signed his commutation.

On Friday, as President Donald Trump made his way to his Mar-a-Lago resort in Palm Beach, Florida, for a vacation, people lined the side of the highway as his motorcade passed, holding signs expressing appreciation and offering blessings.

Nearly 200 people lined Southern Boulevard at around 2:00 p.m. Friday, as the convoy of motorcycles and black SUV’s passed from the airport to the resort. The vast majority of the demonstrators were pro-Trump, and there for the purpose of thanking him for freeing Mr. Rubashkin.

The crowd included Lubavitcher chassidim and other chareidim, as well as secular Jews and people of all religions and races, thanking the president for correcting what they see as a miscarriage of justice. Many noted that they had already called the White House comment line or sent emails to express their gratitude to Mr. Trump.

The presidential SUV slowed as it passed the demonstrators, and Mr. Trump smiled and waved at the crowd, which was holding signs with messages like, “Thank you, Mr. President, for reuniting a father with his 10 children,” “President Trump: Champion of Justice” and, “Thank you, President Trump. May you be blessed with long life.”

“I felt chills down my spine,” said Mrs. Deitsch, who had been davening for Mr. Rubashkin’s release every day for eight years.

That night, “the shuls all had farbrengens and gatherings and speaking and singing and dancing through the night,” said Mrs. Deitsch.

Mrs. Deitsch was among those standing beside Southern Boulevard shortly before Shabbos, she said, to thank the president for both freeing a man given an outrageous sentence and restoring her faith in the American justice system.

“When I was a child in school in Massachusetts, we would recite the Pledge of Allegiance every day,” said Mrs. Deitsch. “All of us – students, teachers and rabbis – would stand with our hands over our hearts and pledge allegiance to this great country, ‘one nation, under G-d, indivisible,’ and we were proud to live in a country we believed had ‘liberty and justice for all.’

“Eight years ago, Judge Linda Reade stole that belief from us. President Trump gave that back to us; now once again, we tell our children this is a fair country.”

Mrs. Deitsch was particularly touched by the president’s reaction Friday.

“When he drove by, his face was at the window, he was smiling broadly, blowing kisses, and mouthing the words ‘thank you.’ He is a man not known for his humility, yet he was humbly thanking us. I think he liked that we were expressing our appreciation that he did something difficult just because it was the right thing to do, which took a lot of courage.”

After the presidential motorcade passed and the road once again opened to traffic, people in cars driving by waved at the demonstrators, shouting things like, “We’re with you,” “We love Trump,” and “We’re happy Sholom is free.”

Arriving back at Palm Beach Island not long before sunset, said Mrs. Deitsch, “We went into Shabbos feeling uplifted by this wonderful free country that we are blessed to live in – a medinah shel chessed.”