Community Rubashkin Reunites With the Rebbi Who Never Forgot Him
Community 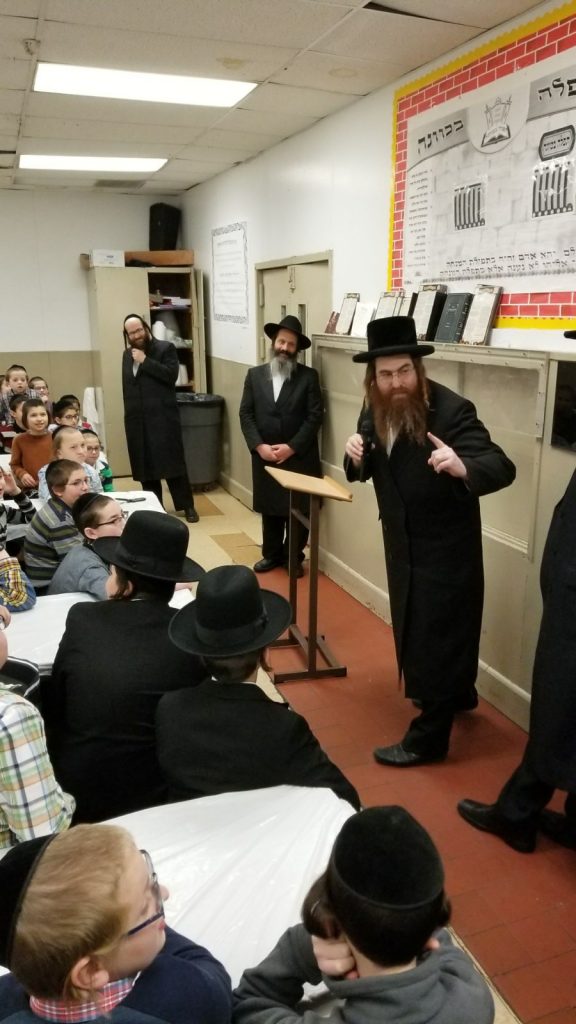 Minutes after Sholom Rubashkin heard the gates of prison clang behind him for the final time, he dialed a number, waited until the other party picked up and then said the words he had been yearning to say for the better part of a decade.

“Reb Leibish,” said Mr. Rubashkin in the call last Wednesday night, “I’m out of prison and I’m coming to visit your class tomorrow.”

Rabbi Leibish Lish, a fourth-grade rebbi in Yeshivah Karlin Stolin, however, was out of town for the next two days so the visit was postponed.

On Sunday, Mr. Rubashkin met for the first time as a free man the group who “adopted” him six years ago, a bit more than a year after he began serving his 27-year sentence in Otisville medium security prison. Rabbi Lish had his class recite Tehillim for him daily and write him letters every week.

“The happiest day of my week,” Mr. Rubashkin declared, “is when I get the letters from Rabbi Lish and his talmidim.”

Rabbi Lish did more than that, visiting him in Otisville — or “the place called prison,” as he referred to it on Sunday — and publishing a collection of his talmidim’s correspondence called Kol Sholom Mordechai.

It was a satisfying conclusion to the saga that has roiled the Orthodox world the past decade, and which was brought to an end last week with the announcement that President Donald Trump was commuting the sentence to time served.

Amid a weeklong tour thanking Klal Yisrael for their care and interest in his welfare, uppermost in Mr. Rubashkin’s mind was the class that never forgot him.

Mr. Rubashkin distributed sifrei Tehillim to Rabbi Lish’s class, as well as those of the previous four years who had informed him over the years of their progress, fears, hopes and prayers. Some of them told him about their birthdays, he recalled on Sunday. Another boy, he said, wrote that Mr. Rubashkin should merit a personal geulah and a geulah klali. “We now had the geulah pratis,” he said, “now we should be zocheh to the geulah klali.”

He then led them in spirited dancing, along with the rest of the yeshivah.

It was not Mr. Rubashkin’s first time in the Boro Park institution, the first chassidishe yeshivah in the neighborhood. He spent the first few years of his life within its walls, something which he credited for the bitachon that got him through the past seven years.

“The halls are the same as when I was here!” he marveled as he stepped into the building for the first time in nearly a half century. None of his rebbeim were still teaching, but several of them came to join in the celebration of his release. He hugged and kissed Rabbi Yitzchok Perris, Rabbi Chaim Kugelman and Rabbi Leizer Pollak, recalling some details of his time with them.

One surprise came when Rabbi Lish announced that he had gone over some of the earlier letters they had exchanged. Pulling out one missive he announced, “This was the first letter written to him on — Vav Teves, exactly six years ago!” Mr. Rubashkin’s eyes opened wide when he heard that, turning to hug Rabbi Lish. Sunday was 6 Teves.

The first letters, Rabbi Lish recalled, were still smudged with oil from the just-concluded Chanukah that year.

Mr. Rubashkin exhibited enormous hakaras hatov to Rabbi Lish and Rabbi Elchonon Jacobowitz, a sixth-grade Rebbi in Yeshivah Darchei Torah in Detroit who also had his class write weekly letters to him. Hours after his release, during a short visit to his parents’ home in Boro Park, he suddenly witnessed the two of them and bounded over. Upon hearing the news of the commutation, Rabbi Jacobowitz had immediately purchased a plane ticket and flew over.

“He came in and saw both of us together,” Rabbi Lish related. “He left everyone and ran over to us. He hugged us and we danced together.”

Mr. Rubashkin is not the only inmate Rabbi Lish had been sending letters to. He had also corresponded with Rabbi Moshe Zigelman and Yanky Ostreicher. Both have since been freed. A picture in Friday’s Hamodia showed him crossing out Mr. Rubashkin’s name for Tehillim in his classroom, next to two other crossed-out names.

While he undertook the project on his own initiative, Rabbi Lish says he recognized that he wouldn’t have been able to do it without the support of the menahel, Rabbi Shmuel Binik, and sgan menahel Rabbi Shlomo Steinmetz.

After speaking to Rabbi Lish’s class, Mr. Rubashkin walked over to the next building for a brief address to the beis medrash, where hundreds crowded around to hear him talk about the power of emunah. He then indicated his wish to do more than give out sefarim to Rabbi Lish’s class — he wanted to deliver a shiur.

The boys trooped back into class and Mr. Rubashkin talked about Yaakov Avinu’s sojourn in Mitzrayim.

“Prison is like Mitzrayim,” he told the boys, who eagerly shouted out the answers to his questions. “They don’t let you do what you want. You want to daven, they say no, you have to work.”

Rabbi Lish related that he once came into class to find a fierce argument among the talmidim. One side, he discovered to his amusement, was contending that Sholom Mordechai should be released from prison suddenly. The other “team,” Rabbi Lish said, disagreed, saying they wanted to have time to prepare for his arrival.

“Both were right,” Mr. Rubashkin cut in. “I came out suddenly and you had time to prepare.”