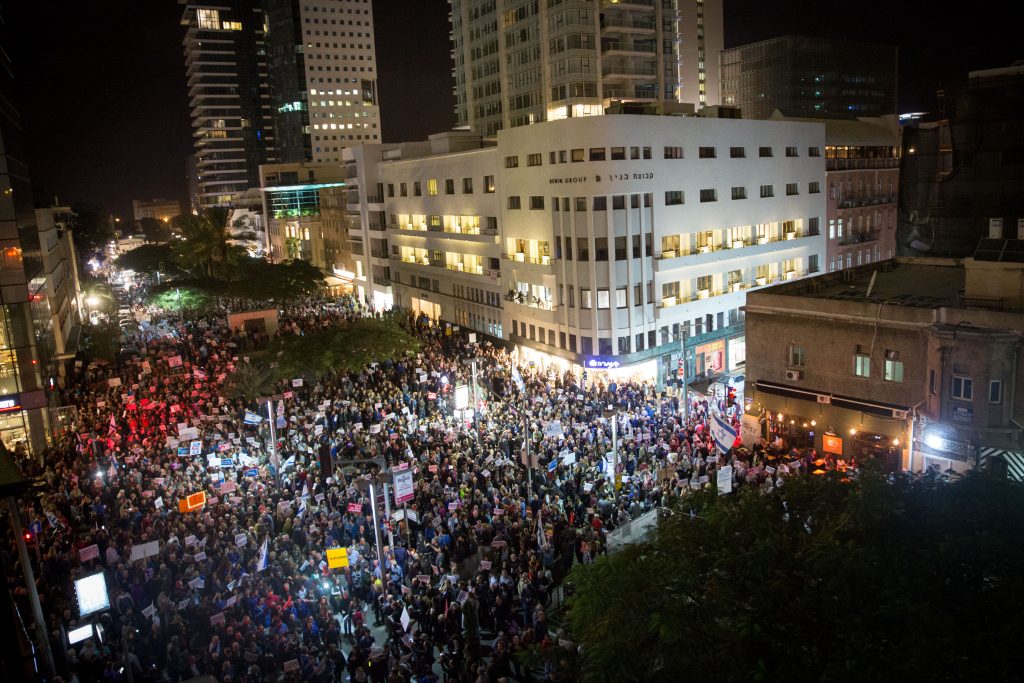 A complaint is set to be filed with police Sunday, as right-wing politicians and organization leaders reacted with anger to the display of a guillotine at the left-wing protest in Tel Aviv, Motzoei Shabbos, against government corruption. In a statement, the Likud said that the display of the guillotine “is incitement to murder Prime Minister Binyamin Netanyahu, which came along with protests and calls against Zionism. The leftist protest in central Tel Aviv crossed all the red lines.”

Other recent causes célèbres were also on display at the rally, right-wing witnesses said, among them signs supporting the BDS movement and signs supporting Ahad Tamimi, the Palestinian teen who assaulted, kicked and spit at an IDF soldier last week. Education Minister Naftali Bennett called the signs “troubling,” and recommended that “we all step back from the edge.”

Left-wing MKs also criticized the guillotine and the signs. MK Ayelet Nachmias-Warbin told Hadashot News that “I come to these protests in order to identify with Israelis who want to change the government — via elections.” She added that “a single protester who veered from the acceptable limits of protest cannot mar the legitimate purpose of these protests. The idea of chopping off the head of anyone is unacceptable.”

For the fourth week in a row, thousands of people protested in Tel Aviv against government corruption — and for the first time, a similar protest was held in Yerushalayim. The Tel Aviv protest featured speeches against the government by members of Zionist Camp, including party chairman Avi Gabay, while the Yerushalayim protest featured former Defense Minister Moshe Yaalon, as well as several MKs from Kulanu, a member party of Prime Minister Binyamin Netanyahu’s coalition.

The protests took on added meaning this week, as expectations grew in the political establishment that police would recommend that prosecutors indict Netanyahu on corruption charges. The indictment would most likely be based on the investigation of Case 1000, in which Netanyahu was accused of accepting extravagant gifts from millionaire Arnon Milchin, mostly cigars. According to Likud sources, police have not established any quid pro quo in the case, in that Milchin did not receive any consideration or benefit for the alleged gifts.

Attorney Eyal Paltek told the 0404 news site that he would file a complaint with police Sunday against the display of the guillotine. “I am not commenting on the purpose or political position of the protest, including whether it was right or left,” he said. “The fact that a guillotine is displayed at a protest against the prime minister is sufficient to raise concern for the possibility of incitement to murder. The guillotine has one purpose — cutting off heads. I demand that police investigate this issue and bring to justice those behind it.”

In a social media post Sunday, the individual who carried the guillotine said that he was a “pacifist who opposes all violence. I have never used violence in my life and I would never do so. I ask that anyone who interpreted my action as a call to violence to stop doing so. Anyone who thinks that I was calling for violence is mistaken.”