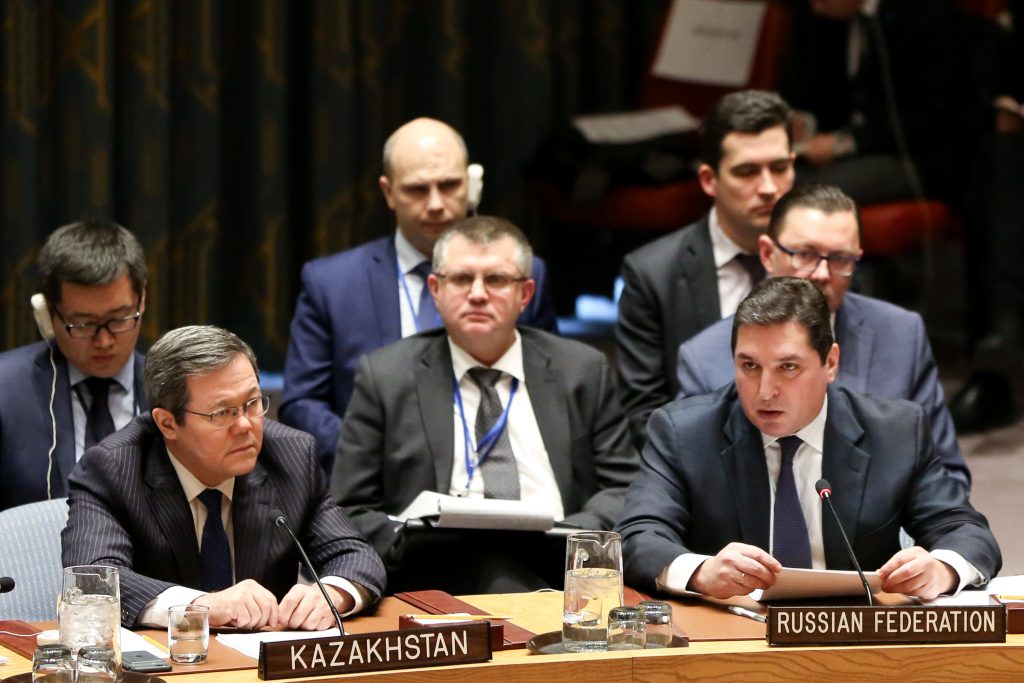 The U.N. Security Council unanimously imposed new sanctions on North Korea on Friday for its recent intercontinental ballistic missile test, seeking to limit its access to refined petroleum products and crude oil and its earnings from workers abroad.

The U.N. resolution seeks to ban nearly 90 percent of refined petroleum exports to North Korea by capping them at 500,000 barrels a year and, in a last-minute change, demands the repatriation of North Koreans working abroad within 24 months, instead of 12 months as first proposed.

The U.S.-drafted resolution also caps crude oil supplies to North Korea at 4 million barrels a year and commits the Council to further reductions if it were to conduct another nuclear test or launch another ICBM.

North Korea on Nov. 29 said it successfully tested a new ICBM that put the U.S. mainland within range of its nuclear weapons.

Tension has been rising over North Korea’s nuclear and missile programs, which it pursues in defiance of years of U.N. Security Council resolutions, with bellicose rhetoric coming from both Pyongyang and the White House.

In November, North Korea demanded a halt to what it called “brutal sanctions,” saying a round imposed after its sixth and most powerful nuclear test on Sept. 3 constituted genocide.

U.S. diplomats have made clear they are seeking a diplomatic solution but proposed the new, tougher sanctions resolution to ratchet up pressure on North Korean leader Kim Jong Un.

“It sends the unambiguous message to Pyongyang that further defiance will invite further punishments and isolation,” Nikki Haley, the U.S. ambassador to the United Nations, said after the 15-0 vote.

The North Korean mission to the United Nations did not immediately respond to a request for comment.

China’s foreign ministry said it hoped all parties would implement the resolution and urged all sides to exercise restraint.

It also reiterated a call for what it calls a “dual suspension” proposal for the United States and South Korea to stop major military exercises in exchange for North Korea halting its weapons programs.

South Korea welcomed the sanctions and called on the North to “immediately cease reckless provocations, and take the path of dialogue for denuclearization.”

North Korea regularly threatens to destroy South Korea, the United States and Japan, and says its weapons are necessary to counter U.S. aggression. The United States stations 28,500 troops in the South, a legacy of the 1950-53 Korean War.

Speaking before the Security Council vote, analysts said the new sanctions could have a major effect on the North’s economy.

“The cap on oil would be devastating for North Korea’s haulage industry, for North Koreans who use generators at home or for productive activities, and for (state-owned enterprises) that do the same,” said Peter Ward, a columnist for NK News, a website that tracks North Korea.

The forced repatriation of its overseas workers would also cut off vital sources of foreign currency, he said.

China, which supplies most of North Korea’s oil, has backed successive rounds of U.N. sanctions but had resisted past U.S. calls to cut off fuel supplies to its neighbor.

John Park, director of the Korea Working Group at the Harvard Kennedy School, said it was important to manage expectations about sanctions, which could take years to have a full impact while the North was making progress in its weapons programs at a pace measured in weeks and months.

“If the game plan is to use sanctions as the last non-military policy tool to induce North Korea’s return to the denuclearization table, we may quickly find Washington prioritizing military options,” Park said.

The move to curb Chinese fuel exports to North Korea may have limited impact after China National Petroleum Corp suspended diesel and gasoline sales to its northern neighbor in June over concerns it would not get paid.

Business has slowed since then, with zero shipments of diesel, gasoline and other fuel from China in October.

Russia quietly boosted economic support for North Korea this year, and last week Russian Deputy Foreign Minister Igor Morgulov said Moscow was not ready to sign up to sanctions that would strangle the country economically.

It also bans exports to North Korea of industrial equipment, machinery, transport vehicles, and industrial metals as well as subjecting 15 North Koreans and the Ministry of the People’s Armed Forces to a global asset freeze and travel ban.

The resolution seeks to allow countries to seize, inspect and freeze any vessel they believe was carrying banned cargo or involved in prohibited activities.

Even if the sanctions have an economic effect, it is not clear whether that would push Pyongyang to negotiate or stop its weapons development, said Kim Sung-han, a former South Korean vice foreign minister.

“We have had numerous … sanctions against North Korea over the past 25 years,” he said. “Almost none have worked effectively to halt the regime’s military and nuclear ambitions.”