Community A Night of Celebration
Community 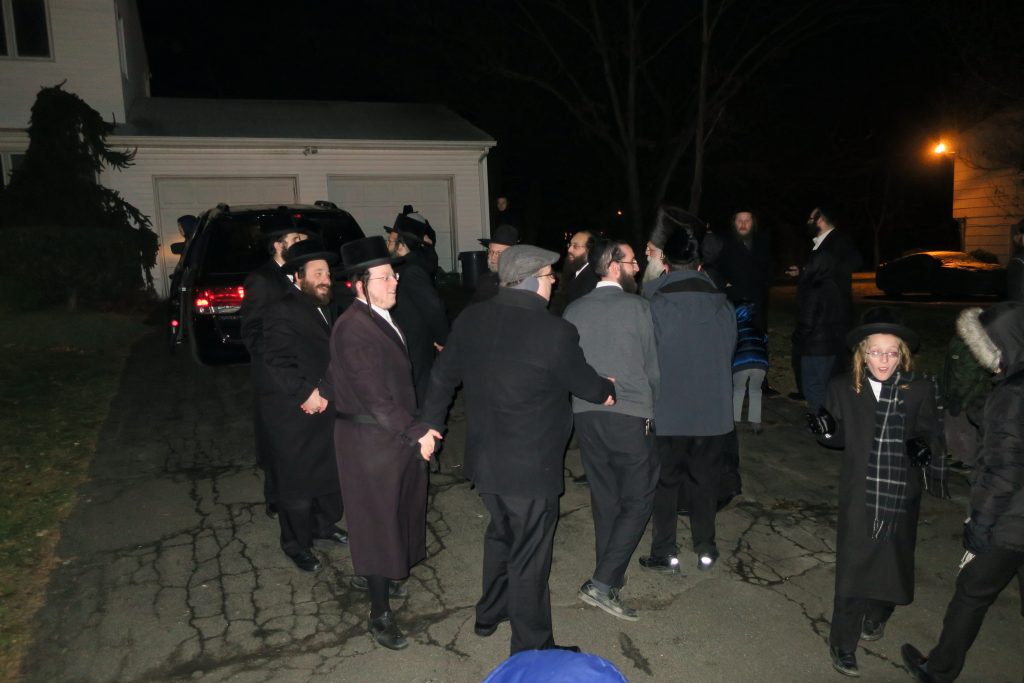 As news spread of Sholom Mordechai Rubashkin’s release from prison, crowds flocked to his home in Monsey, his parents’ home in Boro Park and Chabad World Headquarters in Crown Heights for celebrations that lasted throughout the night.

It’s 7:18 p.m. on the dashboard digital clock. My taxi left me at 95 Southgate Rd. in Monsey about five minutes ago. Now I’m sitting in a bulky unmarked Chaveirim SUV, warming up from the cold.

Out on the street, in front of the dark and empty-looking Rubashkin residence, a handful of onlookers are gathered. Compared to what’s coming, it’s a tiny crowd — a couple of chassidishe bachurim, a few neighbors here and there.

Chaveirim coordinator Yaakov Yosef Margareten sits behind the wheel as he gives me the latest. Sholom Rubashkin is not only free — but is in a car now, he reports. He’s in direct contact with a Rubashkin family member in Mrs. Rubashkin’s minivan.

Where it’s headed isn’t clear. Anywhere but jail is fine.

People are now expressing interest in organizing buses to Crown Heights, according to the latest chatter. The street crowd, moments ago at around a dozen, is now over two.

It’s 7:24. Margereten reports that a Rubashkin destination decision’s coming in 30 minutes. They’re at a gas station upstate right now, where a reported crowd of 30-40 residents of nearby Bloomingburg came out to greet Reb Sholom, to sing and dance with him.

By 7:28, the Ramapo Police Dept. still wants to know what to expect. Waiting on a Rubashkin decision. No officers are here yet. They’ll be here soon. A van drives by the Chaveirim car. A smiling Yid calls out, “Chazak v’ematz!”

A large group of chassidishe bachurim walk up at 7:34, hats and all. “A Zos Chanukah miracle!” another man comments.

At 7:40, this writer spies Getzel in his home’s doorway. After introductions, young Rubashkin quips, “You’re in the right place at the right time!”

Indeed. And little did anyone know how big the crowd would be, I might add.

At 7:45, the crowd — mostly chasidishe men — is thickening. There are at least three minyanim in front of the house and up and down the immediate block. Getzel Rubashkin is saying “L’chaim!” with “strangers.” A circle of dancing to “Chasdei Hashem Ki Lo Samnu” breaks out on the front driveway. An older woman, a close friend of the Rubashkins, tells me that everyone should call the White House comment line to thank the President. Not a bad idea at all.

Meanwhile, word has it that Rubashkin is coming to Monsey — and is 40 minutes away.

Chaveirim’s incident command vehicle pulls up at 7:55, shortly providing bright light to the street. Police close off both ends of Southgate to traffic. There are now at least 50 people milling about. “There are no problems tonight!” I hear someone say.

It’s now 8:05 and Chaveirim reports that “hundreds of people” are at the scene — a rapidly thickening crowd of mostly biber hitlech, a good sprinkling of black hats and hoodies and several dozen women and children — mostly Rubashkin friends and family, it seems.

Reb Sholom is now 20 minutes away, word has it.

By 8:22, Mr. Margareten reports that the phone in the Rubashkin car is battery-dead. No matter.

It’s less than ten minutes later that the crowd, now roughly a good 300 by quick guesstimate, fills the street, the Rubashkin lawn and both sidewalks. The mood is Purim, hachnasas sefer Torah and a wedding before the chassan/kallah come in, all in one.

A cry goes up. Men rush up the street. The singing skyrockets. Reb Sholom has arrived.

A throng of singing, dancing and cheering men mob the man as he makes his way up to his house. At his front step, he exhorts the crowd that, like Aleph, Beis and Gimmel, Emunah and Bitachon bring the Geulah. The crowd roars amen!

Inside his own home (for the first time — the Rubashkins moved here after his sentencing), where a table laden with mezonos and l’chaim await in the living room, Reb Sholom takes a few steps upstairs to greet some children, ostensibly his (or his grandkids). Photos are being snapped everywhere. Live music is pounding outside. The air is filled with excitement and disbelief.

Rockland County Legislator Aron Wieder smilingly ushers Reb Sholom into a chair in the kitchen, and an endless line of men files in, each shaking his hand, many hugging him and even kissing him on the head.

No words are needed. This is Klal Yisrael’s simchah. Our brother is home.

Just minutes after the news of Sholom Mordechai Rubashkin’s commutation, people began flocking to his father Aaron’s butcher shop on 14th Avenue and 44th Street. Family and friends began dancing in the senior Mr. Rubashkin’s office, and crowds outside broke out into joyous dancing. 14th Avenue was closed off between 44th and 45th Streets, as men filled the roads, and women the sidewalks.

On a freezing December evening, multitudes – Chassidim from various sects, litvishe, Rabbanim and Rebbes, young and old — joined hands in the emotional festivities, singing songs of thanks to Hashem, celebrating the freedom of a man most had never met who had become a brother to all.

After several hours of dancing on 14th Avenue, the crowds began to move toward the senior Rubashkins’ home, in anticipation of Sholom Mordechai’s arrival to visit his parents for the first time in eight years as a free man.

The streets were filled several blocks from the home on 15th Ave. and 55th Street. Music and dancing filled the night, until the coach bus carrying the Rubashkin family pulled up to the home. As Sholom Mordechai and his family were escorted through the massive crowd into the home, he attempted to shake as many hands thrust toward him as he possibly could, expressing his gratitude to all.

“Though it was freezing, there was a tremendous warmth in the air,” said Boro Park resident Shia Krieger, among the thousands who witnessed Sholom Mordechai’s arrival. “Though I didn’t personally know anyone there, we all felt a closeness in a common cause, for someone whom we had davened for, for so long.”

After around 45 minutes inside the home — throughout which the music outside continued — Sholom Mordechai emerged, and spoke briefly to the crowd.

“Katonti mikal hachassadim,” said the man who had spent eight years behind bars. He thanked all of Klal Yisrael for supporting him. He said that he was just sitting down to a Zos Chanukah seudah shortly before shkiah when he was informed that he was freed. Just as he saw “Yeshuas Hashem k’heref ayin” in his personal geulah, so will Hashem send, in the blink of an eye, the final Geulah Sheleima.

The family finally piled back onto the bus, and headed toward Crown Heights.

It was 5:16 PM, early Wednesday evening, as the final minutes of Chanukah were at an ebb, when Yidden throughout New York and beyond were jolted by news traveling at the speed of light: Word was that President Donald Trump had pardoned Sholom Mordechai Rubashkin. But could it be? Was this for real? It was in fact real, as a press release sent by the White House to thousands of inboxes at that moment confirmed: “Today, President Donald J. Trump commuted the prison sentence of Sholom Rubashkin,” effective immediately.

At that moment, a rush of emotions surged through every segment of Klal Yisrael: The memories of the government raid, the draconian court sentence, the asifos, the thwarted appeals, the tefillos, the despair, the last-ditch hopes pinned on a new president and finally, the complete unexpectedness with which salvation had been delivered. And something amazing happened: With utter spontaneity, throngs of Yidden in Monsey, Boro Park, Crown Heights and beyond, swarmed and swelled into homes, shuls and public spaces seeking to express the indescribable simchah that consumed one and all.

But while many communities got to know Sholom Rubashkin during the saga of his imprisonment and marveled at his unwavering emunah and bitachon in the face of soul-crushing hardship, his connections to the Chabad community in Crown Heights go deeper where he is intimately familiar to many as a brother, a cousin, a classmate or just an old friend. Lubavitchers are also renowned for their knack for farbrenging and dancing, and thus Crown Heights, and specifically the central shul known as 770, became the focal point for the simchah sweeping New York.

I arrived in 770 at around 10:30 PM, five hours into the festivities which had commenced at word of the thrilling news and had continued unabated ever since. The main downstairs shul had been transformed into an expansive dance space, reminiscent of Simchas Torah, and the few tables which had been left in the area were littered with empty bottles of vodka and other spirits which had been delivered in unlimited quantities. The crowd, however, was so immense, that everyone had likely only had a l’chaim or two, and the atmosphere remained dignified and uplifting. The live music booming on the speakers cycled through the local niggunim suitable for such an occasion: Didan Natzach, Al Nisecha (the joyous coda to a lengthy Haneiros Halulu) and more. Hundreds, if not thousands, danced with abandon, oblivious to the late hour and to the frigid air outside.

As I looked around, I saw many faces of people who likely hadn’t had reason to step into 770 in years, but every resident of Crown Heights knew that tonight this was the place to be. Most everyone had some personal connection to the Rubashkin family, whether through being an acquaintance of tonight’s hero, or through his parents, siblings or children. This was Sholom’s extended and sometime long-lost family that finally joined together for a victorious reunion after a long and painful ordeal that had pulled them apart. Additionally, the shul also filled with chassidishe and yeshivishe faces from nearby communities who felt drawn to Sholom’s final destination on his return ‘home.’

As Sholom Rubashkin arrived in Boro Park to meet his parents and departed towards Crown Heights, the revelry within 770 showed no sign of letting up, but the crowd waiting outside in anticipation grew as well. People furiously worked their phones, trying to determine when and where he was going, and a loud cheer went up as the bus carrying him, his family, and well-wishers pulled up on Eastern Parkway at 12:40 PM. He was whisked into shul and lead through the hordes of dancers to the front of the shul as the music was paused briefly so he could daven Maariv, his first tefillah a free person and back in the shul so dear to him with family and friends. He led Maariv in a joyous Yom Tov rendition, and he stood up briefly to share just some of the thoughts and emotions flooding him at this unbelievable moment.

Once he concluded, the music and dancing resumed for close to another two hours till 3 a.m., Sholom Rubashkin standing on an elevated platform where an endless stream of people climbed to briefly greet him and dance with him.

All this while, Crown Heights was far from the only Chabad locale where festivities were being conducted. The local community in Postville, Iowa, the site of Sholom’s one-time home and life’s work, gathered for spirited dancing. A large farbrengen was also called in the Chabad yeshivah Ohr Elchonon in Los Angeles, where Rubashkin’s tireless attorney Gary Apfel spoke about the hard-won release. Additionally, in the homes of many shluchim that dot the span of the United States, families erupted in spontaneous song and dance. As Wednesday turned into Thursday, the good news spread through Europe and Israel where new rounds of simchah and celebration ensued. The festivities reached their denouement when Sholom Rubashkin returned to 770 in the morning to daven in the main minyan for Shacharis, where he received an aliyah and bentched an emotional brachah of Hagomel for his release from imprisonment.