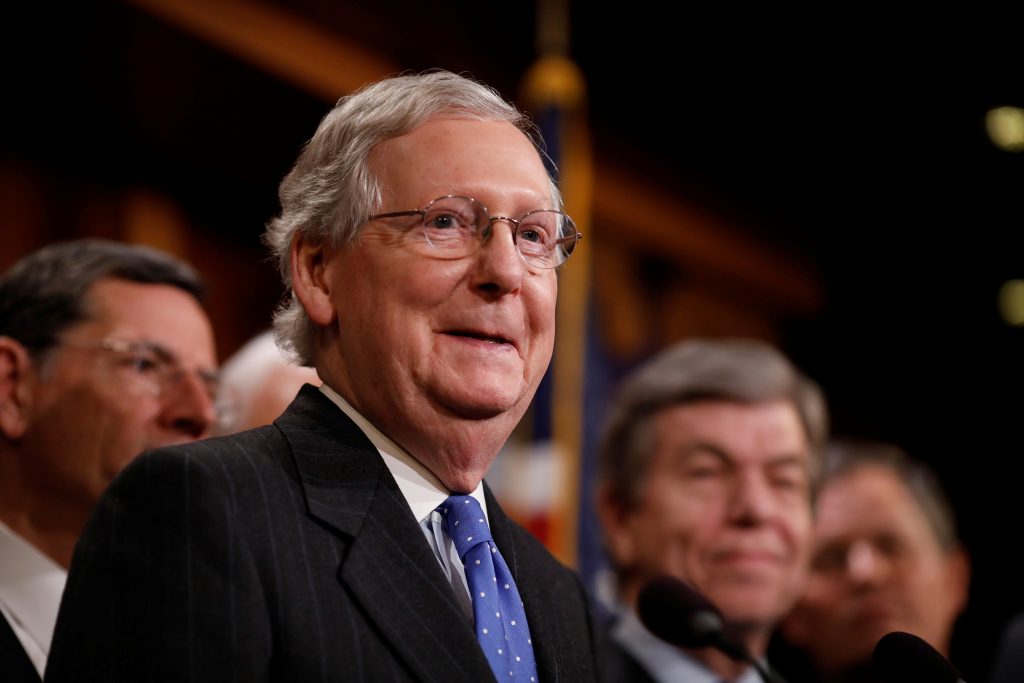 Jubilant Republicans pushed on early Wednesday to the verge of the most sweeping rewrite of the nation’s tax laws in more than three decades, a deeply unpopular bill they insist Americans will learn to love when they see their paychecks in 2018. President Donald Trump cheered the lawmakers on, eager to claim his first major legislative victory.

After midnight, the Senate narrowly passed the legislation on a party-line 51-48 vote. Protesters interrupted with chants of “kill the bill, don’t kill us” and Vice President Mike Pence repeatedly called for order. Upon passage, Republicans cheered, with Treasury Secretary Steve Mnuchin among them.

“If we can’t sell this to the American people, we ought to go into another line of work,” he said. Trump hailed the vote in an early morning tweet and promised a White House news conference Wednesday after the House completes legislative action on the measure.

The early morning vote came hours after the GOP rammed the bill through the House, 227-203. But it wasn’t the final word in Congress because of one last hiccup.

Three provisions in the bill, including its title, violated Senate rules, forcing the Senate to vote to strip them out. So the massive bill was hauled back across the Capitol for the House to vote again on Wednesday, and Republicans have a chance to celebrate again.

Hours earlier, House Speaker Paul Ryan, who has worked years toward the goal of revamping the tax code, gleefully pounded the gavel on the House vote. GOP House members roared and applauded as they passed the $1.5 trillion package that will touch every American taxpayer and every corner of the U.S. economy, providing steep tax cuts for businesses and the wealthy, and more modest help for middle- and low-income families.

Despite Republican talk of spending discipline, the bill will push the huge national debt ever higher.

“This was a promise made. This is a promise kept,” Ryan and other GOP leaders said at a victory news conference.

After the delay for a second House vote, the measure then heads to Trump, who is aching for a big political victory after 11 months of legislative failures and nonstarters. The president tweeted his congratulations to GOP leaders and to “all great House Republicans who voted in favor of cutting your taxes!”

Congressional Republicans, who faltered badly in trying to dismantle Barack Obama’s Affordable Care Act, see passage of the tax bill as crucial to proving to Americans they can govern — and imperative for holding onto House and Senate majorities in next year’s midterm elections.

“The proof will be in the paychecks,” Sen. Rob Portman, R-Ohio, said during the Senate’s nighttime debate. “This is real tax relief, and it’s needed.”

Not so, said the top Senate Democrat as the long, late hours led to testy moments.

“This is serious stuff. We believe you are messing up America,” New York Sen. Chuck Schumer told Republicans, chiding them for not listening to his remarks.

The GOP has repeatedly argued the bill will spur economic growth as corporations, flush with cash, increase wages and hire more workers. But they acknowledge they have work to do in convincing everyday Americans. Many voters in surveys see the legislation as a boost to the wealthy, such as Trump and his family, and a minor gain at best for the middle class.

Ryan was positive, even insistent. He declared, “Results are what’s going to make this popular.”

Democrats called the bill a giveaway to corporations and the wealthy, with no likelihood that business owners will use their gains to hire more workers or raise wages. And they mocked the Republicans’ contention that the bill will make taxes so simple that millions can file their returns “on a postcard” — an idea repeated often by the president.

“What happened to the postcard? We’re going to have to carry around a billboard for tax simplification,” declared Rep. Richard Neal of Massachusetts, the top Democrat on the Ways and Means Committee.

Tax cuts for corporations would be permanent while the cuts for individuals would expire in 2026 to comply with Senate budget rules. The tax cuts would take effect in January, and workers would start to see changes in the amount of taxes withheld from their paychecks in February.

For now, Democrats are planning to use the bill in their campaigns next year. Senate Democrats posted poll numbers on the bill on a video screen at their Tuesday luncheon.

“This bill will come back to haunt them, as Frankenstein did,” House Democratic leader Nancy Pelosi said.

The bill would slash the corporate income tax rate from 35 percent to 21 percent. The top tax rate for individuals would be lowered from 39.6 percent to 37 percent.

The legislation repeals an important part of the 2010 health care law — the requirement that all Americans carry health insurance or face a penalty — as the GOP looks to unravel the law it failed to repeal and replace this past summer. It also allows oil drilling in the Arctic National Wildlife Refuge.

The bill is projected to add $1.46 trillion to the nation’s debt over a decade. GOP lawmakers say they expect a future Congress to continue the tax cuts so they won’t expire. That would drive up deficits even further.

The bill would initially provide tax cuts for Americans of all incomes. But if the cuts for individuals expire, most Americans — those making less than $75,000 — would see tax increases in 2027, according to congressional estimates.