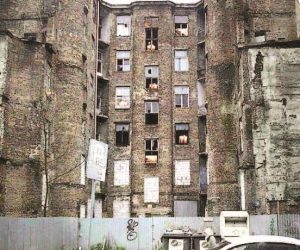 This year, once again, a number of Jewish architects lit Chanukah lights in windows of a building that has survived since the era of the Warsaw Ghetto.

The house at 14 Waliców Street is one of the larger Warsaw Ghetto structures to have remained standing in spite of all the destruction. There are many noticeable holes in the façade of the building as a result of the bombings that strafed it, yet it has survived in its entirety, today preserved as a landmark and serving as one of the memorial sites in the Ghetto.

A number of Jewish Israeli architects who have a business stake in various sites that survived the Nazi era, both in Warsaw and elsewhere, again this year kindled Chanukah lights in the building’s windows.

While the number of lights kindled did not correspond to the day of the holiday, the organizers explained that the very act of kindling the Chanukah lights serves as a memorial to the Jewish community of Warsaw that was destroyed and the once vibrant life there, as well as a memorial to the light of Torah and Chassidus that burned there for hundreds of year and was extinguished. It serves primarily, they say, as a reminder that “the Strength of Israel will neither lie nor repent,” and that, despite the darkness that once enveloped the Ghetto, lights have again been kindled within.

There are a number of other buildings and walls on Waliców Street that survived the Warsaw Ghetto era, with one building half-bombed and half-standing to this day as a memorial to the Jews of the city of Warsaw, Hy”d, who were exterminated during the Holocaust.