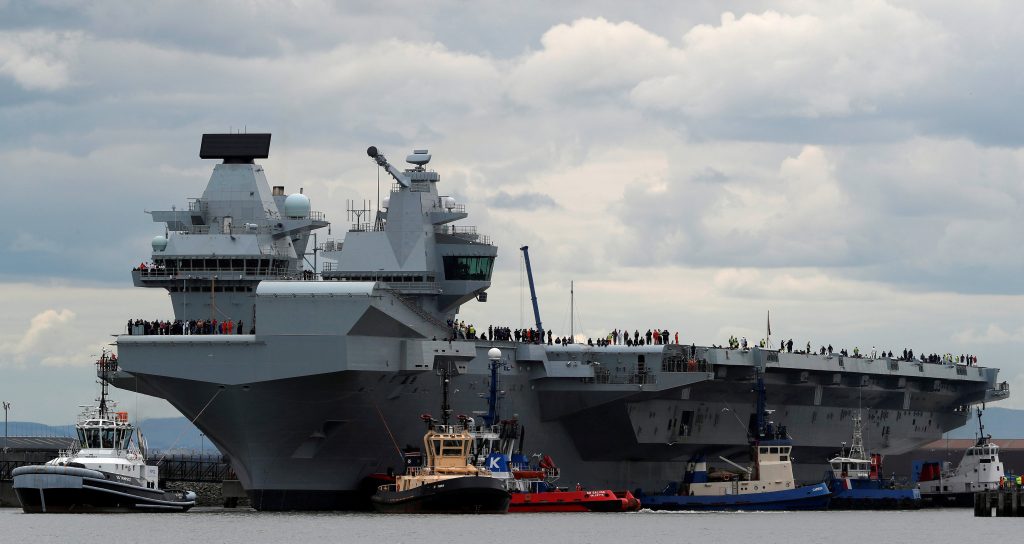 The 65,000-ton ship is hailed as Britain’s most advanced military vessel and was only commissioned by the queen two weeks ago but it has a problem with a shaft seal that was identified during sea trials, the MoD said.

“Sea trials are precisely for finding manageable teething problems like this and rectifying them,” a Royal Navy spokesman said.

“Repairs under contract are already underway alongside in Portsmouth and the sea trials will take place as planned in the New Year, when we will continue to rigorously test the ship before she enters service.”

The Sun newspaper reported that the 280-metre (920-foot) warship, the nation’s future flagship vessel, was letting in 200 litres of water every hour and the fix would cost millions of pounds.

A defense source said the navy was aware that the ship, which took eight years to build, had an issue when it was handed over by manufacturers and The Sun said the builders would have to foot the repair bill.

The Aircraft Carrier Alliance – a consortium including British engineering companies BAE Systems and Babcock , and the U.K. division of France’s Thales – built the Queen Elizabeth and its sister aircraft carrier, the HMS Prince of Wales, as a part of a 6.2 billion pound project.

“It’s normal practice for a volume of work and defect resolution to continue following vessel acceptance,” BAE Systems said in a statement. “This will be completed prior to the nation’s flagship re-commencing her program at sea in 2018.”

BAE said the issue would take just a couple of days to fix with no need for the ship to be taken into a dry dock.

“That’s why you have pumps,” he told Sky News. “When you get a brand new car not everything’s perfect, you have to send it back to the garage to get a few things tweaked. This is exactly in that bracket.”

Also on Tuesday, parliament’s defense committee raised questions about the procurement of the F-35 fighter jets from a consortium led by Lockheed Martin which will eventually operate from the Queen Elizabeth.

The committee said there had been an “unacceptable lack of transparency” about the program and the MoD had failed to provide details of the full cost of each aircraft which one newspaper had estimated could be as much as 155 million pounds.

“We strongly refute any suggestion of a lack of transparency in the F-35 program ,” an MOD spokesman said.

“The program remains on track, on time, within costs and not only offers our military the world’s most advanced fighter jet but will support over 24,000 British jobs and is very much clear for take-off.”

When the aircraft carrier was commissioned, British Defense Secretary Gavin Williamson said: “Our new aircraft carrier is the epitome of British design and dexterity, at the core of our efforts to build an Armed Forces fit for the future.”