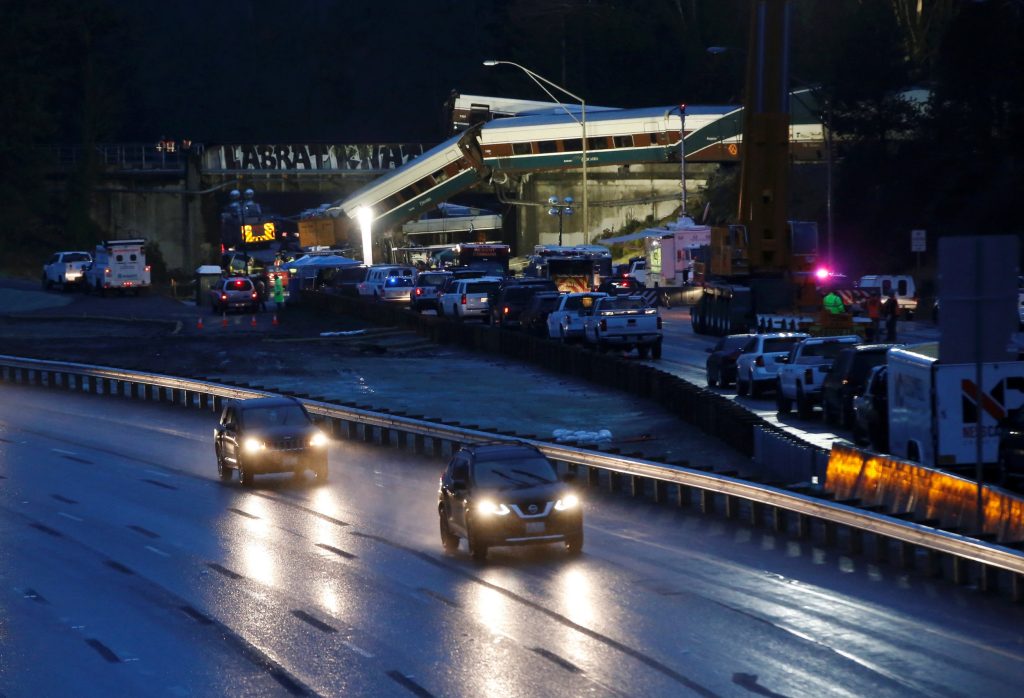 The fatal derailment of an Amtrak train south of Seattle on Monday is likely to intensify scrutiny of the national passenger railroad company’s safety record, which was already under the microscope following a series of fatal incidents.

The U.S. National Transportation Safety Board (NTSB) said late on Monday that a data recorder retrieved from the rear locomotive showed the train was traveling at 80 miles an hour in a 30-mile-per-hour zone when it jumped the tracks.

The NTSB said it was too soon to say if that contributed to the crash, which killed at least three people, and it could take months for the board’s investigators to reach a conclusion.

Amtrak’s co-chief executive, Richard Anderson, told reporters earlier on Monday he would not speculate on the cause of the crash, and that safety was the firm’s top priority.

But he acknowledged that positive train control (PTC), a system that automatically slows trains if they are going too fast, had not been installed on that stretch of track.

Just last month, the NTSB chairman issued a scathing critique of Amtrak’s culture, saying a future breakdown was likely, and the board made nine safety recommendations.

“Amtrak’s safety culture is failing and is primed to fail again, until and unless Amtrak changes the way it practices safety management,” Robert Sumwalt said on Nov. 14.

Sumwalt’s statement was made in conjunction with the NTSB’s findings into a fatal Amtrak accident in April 2016 in Pennsylvania, which it said was caused by “deficient safety management across many levels of Amtrak and the resultant lack of a clear, consistent and accepted vision for safety.”

In that crash an Amtrak train struck a backhoe tractor on railroad tracks in Chester, Pennsylvania, killing two maintenance workers and injuring 41. It occurred a few miles south of the site of a May 2015 derailment in which eight people were killed and more than 200 injured.

Sumwalt told a hearing that the board’s investigation “revealed more than two dozen unsafe conditions and not all of these were rule-breaking by front-line employees.”

Anderson also told reporters on Monday that Amtrak took NTSB recommendations from investigations “very seriously” and was continuing to make investments that the board recommended.

Amtrak said in a memo to employees in November seen by Reuters that it had been “transforming our safety culture” since the Pennsylvania incident and had made numerous reforms, including to communication, training, safety efforts and creating a team that conducts safety audits. It also expanded drug and alcohol testing.

On Monday, a U.S. congressman from Washington State called attention to the slow roll-out of PTC.

“We don’t know that it could have saved lives … but it is a disappointment to me that we’re not further along in the implementation of installing PTC,” Representative Denny Heck, a Democrat, told CNN.

Congress had mandated the implementation of PTC nationwide by the end of 2015, then extended that deadline until the end of 2018 when its installation became more complex than anticipated.

“There is a money issue because while Congress mandated the implementation of PTC on the railroads they didn’t give any money for it, so it is self-funded,” said Allan Zarembski, director of the Railroad Engineering and Safety Program at the University of Delaware.

Zarembski cautioned against assigning blame for Monday’s accident, noting that Amtrak does not own the track where the accident occurred. It is owned by the Seattle-area Sound Transit agency.

“The railways generally are very safe,” he said. “I’m very reluctant to point the finger and say the railroads are a major problem here.”

A spokesman for Sound Transit, Geoff Patrick, said the track had recently been upgraded to handle passenger trains from its prior use for slow-moving freight trains.

He said Sound Transit was part of the incident response and was working with the NTSB in its investigation.