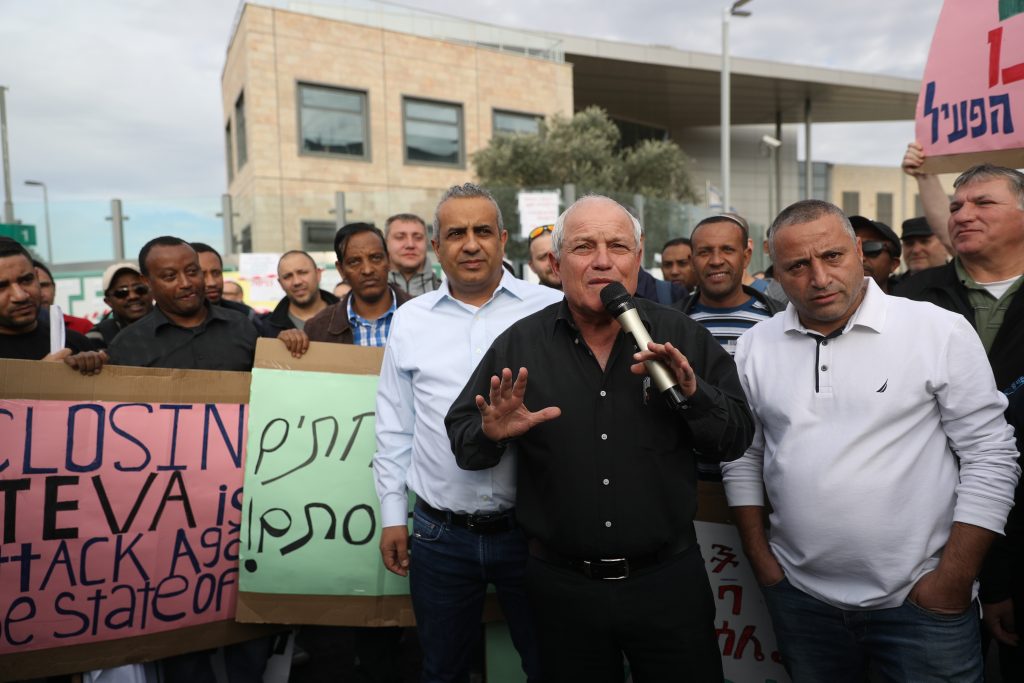 Teva workers on Monday continued their protests against mass layoffs planned by company management, with Itzik Ben-Simon, head of the workers’ committee of Teva’s Yerushalyim plant threatening to do “whatever it takes” to ensure that workers don’t lose their jobs. “We will demand from [Finance Minister Moshe] Kahlon that Teva remain in Yerushalyim forever,” he told Hadashot News. If the plant’s closure does take place, “we will cross red lines,” threatened Ben-Simon. “If they try to save $20 million by closing us down, it will cost them $220 million in the end.”

Workers remained barricaded inside the plant until Monday morning, and they are there to stay, Ben-Simon said. And if the closure did take place, the state would regret it, he threatened. “This factory is a ticking time bomb. We have a lot of explosive and poisonous materials here. The country must be on alert” if something goes wrong. When asked if he was threatening to blow up the plant, Ben-Simon said he was not, but that it was imperative that the plant remain in business.

On Monday, workers left the plant and marched to the offices of the Finance Ministry, where they barricaded the entrance and held an angry protest. Ben-Simon is set to meet with Kahlon, Economy Minister Eli Cohen, Histadrut labor union head Avi Nissenkorn, and the head of the Histadrut Leumit, another union, on ways to fight the layoffs. Meanwhile, Kahlon and Prime Minister Binyamin Netanyahu are set to meet with Teva CEO Kare Schultz, and the two will ask the Teva CEO to make most of its employee cuts at Teva facilities abroad.

Netanyahu said at Sunday’s Cabinet meeting that “our first objective is to limit the damage to employees, and the second is to prevent the closure of the Yerushalayim facility by the company. Our third objective is to ensure that Teva remains an Israeli company.

Over the past decade, Teva has gotten as much as NIS 22 billion ($6 billion) in subsidies, tax breaks, grants and other benefits from the government, much of it for building factories and facilities in peripheral areas. While those grants did not come with a quid pro quo requiring Teva to make a specific commitment to employing people or keeping the facilities open, Netanyahu and Kahlon will tell Schultz that Teva has a “moral obligation” to keep operations open in Israel.