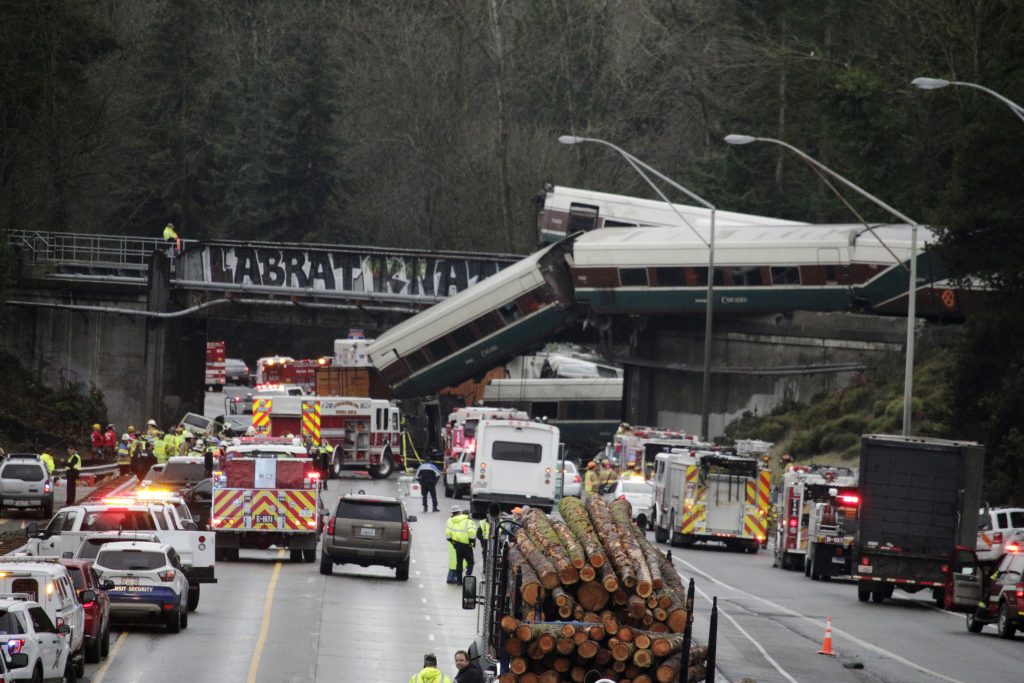 An Amtrak train making the first-ever run along a faster new route hurtled off an overpass Monday near Tacoma and spilled some of its cars onto the highway below, killing at least six people, authorities said.

Seventy-eight passengers and five crew members were aboard when the train moving at more than 80 mph derailed about 40 miles south of Seattle before 8 a.m., Amtrak said.

There was no immediate word on why the train left the tracks.

The Pierce County Sheriff’s Office said several vehicles on Interstate 5 were struck by falling train cars and multiple motorists were injured. No fatalities of motorists were reported.

Chris Karnes was on the train, three or four cars back from the front.

Medical tents were set up in the highway median just south of DuPont.

“The only car that is on the tracks is the rear locomotive. There are several cars that are hanging over the overpass,” Karnes said.

In a statement, Amtrak said the train that derailed was Train 501, offering service from Seattle to Portland.

The train was making the inaugural run on the new route as part of a $180.7 million project designed to speed up service by removing passenger trains from a route along Puget Sound that’s bogged down by curves, single-track tunnels and freight traffic.

It left Seattle around 6 a.m., according to an Amtrak schedule, and was due in Portland about 3 1/2 hours later.

The new route includes a bypass built on an existing inland rail line that runs along Interstate 5 from Tacoma to DuPont, near where Train 501 derailed. Track testing was completed in January and February in advance of Monday’s launch, according to the Washington State Department of Transportation.

The mayor of Lakewood, Washington, a city along the new route, predicted a deadly crash — but one involving a fast-moving train hitting a car or pedestrian at a grade-crossing. At a public meeting two weeks ago, he called on state planners to build overpass-like rail structures instead of having trains cross busy streets.

“Come back when there is that accident and try to justify not putting in those safety enhancements,” Anderson said, according to Seattle TV station KOMO. “Or you can go back now and advocate for the money to do it, because this project was never needed and endangers our citizens.”

The National Transportation Safety Board said it has a team of investigators on the way from Washington, D.C.

A spokesman for Providence St. Peter Hospital in Olympia said his hospital has received 11 patients. Chris Thomas did not know their specific conditions. Two patients at his hospital were in the operating room as of early morning, one of them in serious condition, he said.

The train was going 81.1 mph moments before the derailment, according to transitdocs.com, a website that maps Amtrak train locations and speeds using data from the railroad’s train tracker app.

The maximum speed along the stretch of track, known as Point Defiance Bypass, is 79 mph, according to information about the project posted online by the Washington State Department of Transportation.

All southbound lanes of I-5 were closed south of Joint Base Lewis-McChord, and motorists were being warned to avoid the area.