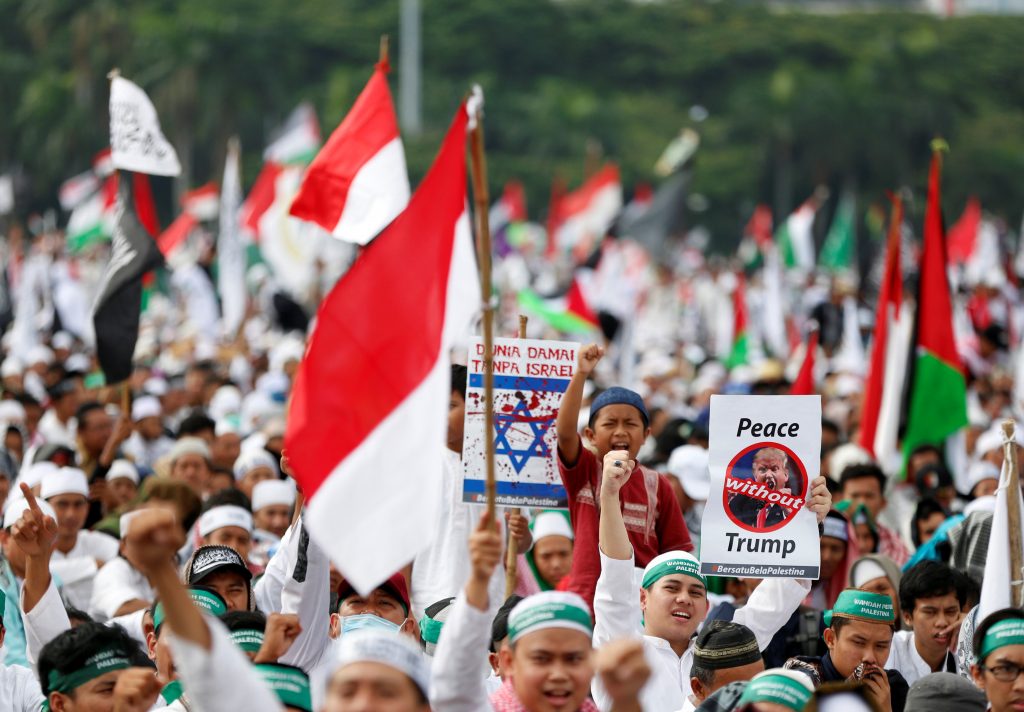 Tens of thousands of Muslims marched from the main mosque in Indonesia’s capital to a square in Jakarta on Sunday to protest against U.S. President Donald Trump’s decision to recognize Yerushalayim as the capital of Israel.

It was the biggest protest in Indonesia since Pres. Trump’s declaration thus far. Police estimated the number attending the rally, organized by various Muslim groups, at about 80,000.

The protest was peaceful but rows of police behind coils of barbed wire held back the crowd outside the U.S. embassy in Jakarta. A police spokesman said 20,000 police and members of the military were deployed to ensure security.

“We urge all countries to reject the unilateral and illegal decision of President Donald Trump to make Yerushalayim Israel’s capital,” Anwar Abbas, the secretary general of the Indonesian Ulema Council, told the crowd.

“We call on all Indonesian people to boycott U.S. and Israel products in this country” if Pres. Trump does not revoke his action, Abbas said, reading from a petition due to be handed to the U.S. ambassador in Indonesia.

Supporters of the Jamaat-e-Islami party in Karachi and advocates of U.S.-wanted Islamist Hafiz Saeed in Lahore dispersed peacefully after rallying Sunday for the Palestinian cause.

Protests have persisted in Pakistan since Pres. Trump’s announcement angered Muslims across the world.

The chief of Jamaat-e-Islami, Sirajul Haq, called on all Muslim nations to suspend diplomatic ties with the U.S. until it reconsiders its decision.