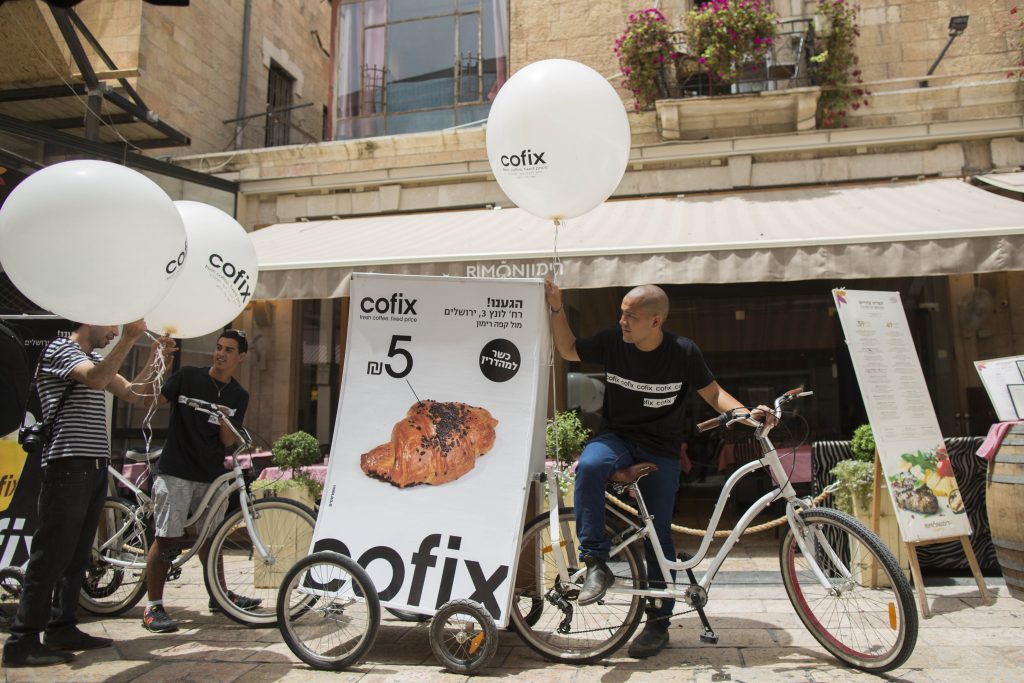 Once the darling of Israeli bargain hunting diners, Cofix has gone from a profit-making enterprise to one that is losing money – and to bring back customers who have abandoned that chain, Cofix is planning to bring back the NIS 5 cup of coffee that made it famous.

A report in Ma’ariv quoted company sources as saying that the price rollback is one of a number of steps Cofix is taking to get back to making money. In February, company chairman Avi Katz announced that the price of a cup of coffee was rising from NIS 5 to NIS 6 – just a shekel, but apparently it was that shekel that was the root of the company’s problems. Sales at Cofix’s 134 branches are down 26 percent this year, and a number of franchisees have cashed out – a stark change from the situation just a year ago, when there was a waiting list for franchises. Income was down 5.2 percent in the third quarter of 2017 compared to a year earlier, and it lost NIS 832,000 during that quarter – compared to the NIS 1.9 million it made in the third quarter of 2016.

Most of the losses came from operations at the chain’s Israeli coffee shops. Cofix operates 34 branches in Russia, and those have been making money, as well as its Super Cofix grocery chain, which saw increased sales this year, but are marked by high expenses. To ease the burden, Cofix is in talks with supermarketer Rami Levy for acquisition of the grocery stores.

Cofix appeared on the Israeli scene nearly four years ago, after the protests in the summer of 2011 over the high cost of living in Israel. One of the few lasting results of those protests, Cofix revolutionized fast food in Israel by offering coffee, snacks, and even whole a la carte meals where each item cost NIS 5 ($1.35) – when competing cafés were charging three times and more for their products. The idea caught on, spawning imitators, and Cofix itself expanded into the supermarket business, selling household products, grocery items, frozen food and much more for NIS 5 per item as well

As to why consumers have abandoned Cofix, the answers are numerous, according to experts quoted by Ma’ariv. Customers have complained of reduced quality of products, as the company seeks to cut ever-rising costs – the reason it hiked prices by 20 percent. According to Katz, the culprits in the price increase were the usual suspects: increases in the cost of raw materials, labor, rent, taxes, etc. “These increases in expenses were not sudden,” he said in interviews at the time of the price hike. “Stores that renewed leases over the past three years have all had to pay rent increases, and the cost of raw materials is constantly rising. We have been absorbing the increases until now so that we could hold onto the NIS 5 concept, but that is no longer possible.”

But nearly all experts agree that the loss in sales at the coffee shops is at least in part directly attributable to the NIS 6 price. Customers have complained that what was an easy transaction – presenting a NIS 5 coin in return for a cup of coffee – became a complicated operation involving counting change, waiting extra time for transactions to be completed, and a lingering feeling that if the company could raise prices by a shekel, it could raise them by two next year. Meanwhile, competitors rose and NIS 6 coffee is almost standard in many grocery stores and convenience stores – and at cafés where the prices are higher, the cup of coffee has increased in size to provide customers with more value for their money. While the price rollback may not solve Cofix’s problems, Katz is hopeful it will bring at least some customers back to the coffee shops, the report added.