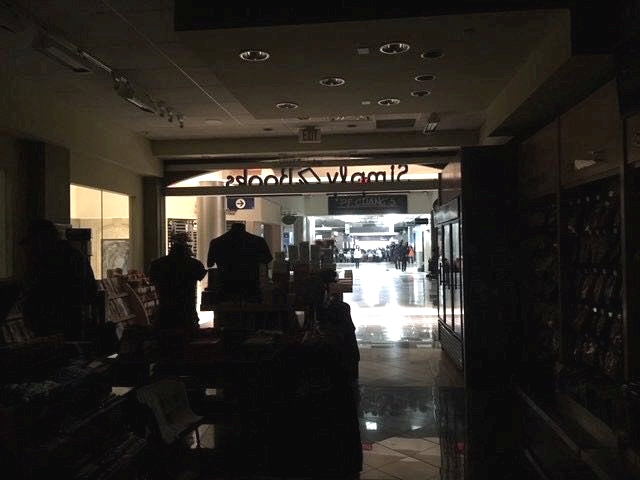 A power outage halted much activity Sunday at Hartsfield-Jackson Atlanta International Airport, leaving passengers at the world’s busiest airport stranded in a dim terminal. Passengers on planes waiting to depart, or to pull up to the terminal after arrival, were waiting on the tarmac for hours.

The Federal Aviation Administration (FAA) said it was forced to hold back flights bound for Atlanta. Flights already in the air waiting to land at Hartsfield were diverted to other area airports, U.S. Customs and Border Protection said.

The FAA flight control tower was operating normally, but departures were delayed because airport equipment in the terminals was not working, the FAA said in a statement.

The cause of the outage was not immediately known, according to the airport and Georgia Power, which provides electricity to the sprawling facility. The utility had crews at the airport, spokesman John Kraft said.

Rabbi Noson Tsvi Cohen, rabbi emeritus at Cong. Shaarei Tefillah on West 1st street and Quentin Road in Brooklyn, was returning home Sunday after visiting his son in Dallas for Shabbos, but his plane was stuck on the tarmac following a scheduled stopover at Hartsfield.

“Our flight arrived from Atlanta at 1:00 p.m.,” Rabbi Cohen told Hamodia in a phone interview from the plane on which he and approximately 100 other passengers were still waiting on the tarmac over five hours later. His connecting flight to New York had been scheduled for 2:30 p.m.

“Our plane arrived at Hartsfield shortly after the power went out, so we were allowed to land,” said Rabbi Cohen. “The pilot told us that planes arriving later were diverted to nearby airports.”

The pilot of Rabbi Cohen’s plane said that twenty of the 90 planes that had been sitting on the tarmac have been unloaded via a staircase wheeled to the plane or “air stairs.” Disembarking passengers have been standing on a rainy tarmac. Even once the passengers enter the terminal, the luggage would not be brought inside the terminal, as the planes are far from the gate and it is raining, and the luggage carousels are not working during the power outage anyway. Any passengers making it to the terminal will have to wait inside the darkened, jammed building until the power goes on.

“Flight attendants are giving out whatever food is on the plane, but there’s not that much on this short flight,” said Rabbi Cohen.

Passengers on his plane had mostly been calm and sitting in their seats for the first four hours. Around 5:00 p.m., he said, the people began getting antsy and moving about; attendants were trying to assist one woman on the flight with a medical issue.

Rabbi Cohen himself remained cheerful, even as the pilot said it would probably be another hour before the air stairs will reach their plane.

“I’ve been able to learn a daf Gemara on this tarmac already; onto my second daf now.”