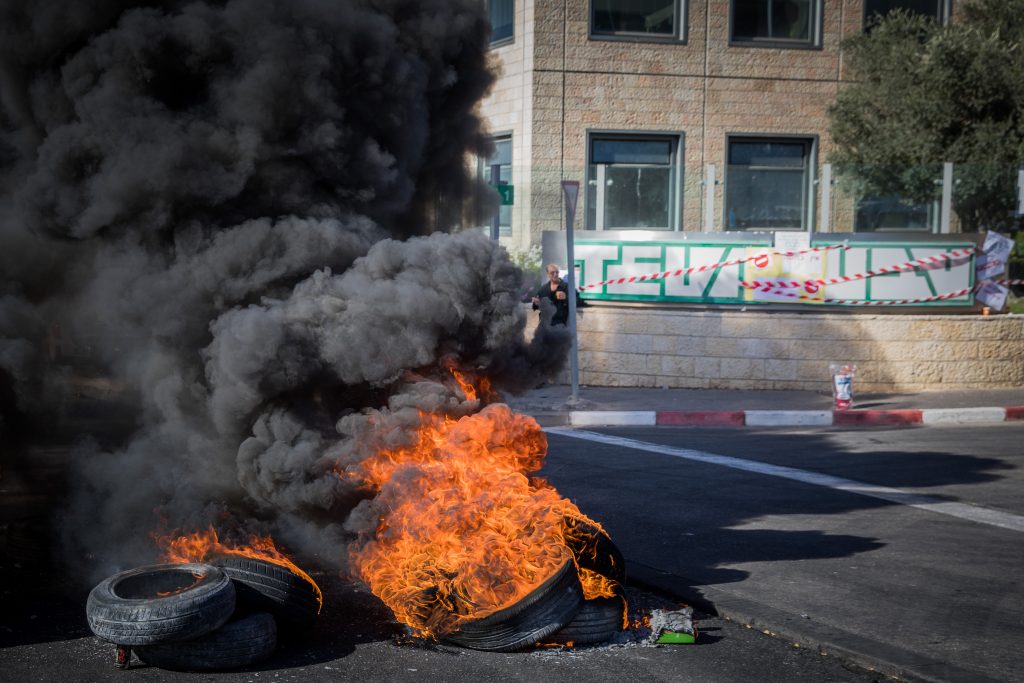 While Teva employees threatened with layoffs were demonstrating and burning tires on Sunday, the mood at corporate headquarters was brightened by news from the Tel Aviv Stock Exchange and Wall Street, where company shares were surging.

The massive firings – executives call it “restructuring’ – were welcomed in the markets, as the share price rose 18.5 percent on Friday.

The $18.60 share price, giving it an $18.9 billion market cap, restored Teva to its position as Israel’s most valuable company, ahead of Checkpoint with a market cap of $17.5 billion, Globes reported.

“We believe $3 billion of costs cuts are achievable, given the CEO’s track record,” wrote Goldman Sachs analyst Jami Rubin in raising her recommendation for Teva’s share from “Neutral” to “Buy,” with a target price of $20, 7.5 percent above the market price.

Credit Suisse has also upgraded its recommendation from “Market underperform” to “Neutral,” and has more than doubled its target price, from $8 to $20. Analyst Vamil Divan was impressed with the take-charge of the new CEO: “Kare Schultz is moving quickly to try and turn TEVA around,” his plan more aggressive than expected, a pleasant surprise for investors.

On the other hand, Haaretz quoted “American experts” who say “there’s almost no chance that Teva can return to the place that it occupied in 2015, when its share price reflected a market value of over $60 billion. Its shares have already fallen by 70 percent from that peak; when the current crisis ends, Teva will evidently no longer be a giant corporation, since parts of it will have either been closed or sold off. Alternatively, it might get merged into another company and cease to exist altogether, or it could return to being a niche company that is small by international standards.”

Moody’s rating agency was reportedly re-examining Teva’s debt rating with a view to a possible downgrade.

“Earnings declines in Copaxone will be significant, potentially exceeding lost earnings that Moody’s had earlier anticipated. At the same time, weakness in the U.S. generics business will weigh on Teva for at least the next two years. Moody’s recognizes that Teva’s announced restructuring plan resulting in drastic cost cuts and a suspension of its dividend are credit positive. However, the company has now said that it will not consider other actions, such as equity raises.”

Meanwhile, in an interview with Globes, Schultz expressed sympathy for the thousands who are about to lose their jobs in the restructuring:

“It’s important to me to say to the employees that I’m very sad about the good people around the world who will leave the company not for their benefit. I’m very sad about that, but it’s necessary, that’s the situation, and that’s what has to be done. We carried out a comprehensive review, and what we’re doing now is what has to be done in order to remain a competitive and strong company.”

When asked about the discussion with the Histadrut and the government who are seeking to pressure the company to cut back on the cutbacks, Shultz said:

“There are things that are not matters for discussion. When a plant is not profitable and does not fit in to the big picture, the change has to be made. It’s a global puzzle, and there is no specific focus on Israel in the plan. On the other hand, we have sites like Kfar Saba and Teva Tech where there is no intention of reducing manpower,” the CEO said.

Katz was quoted by Ynet as saying that “with a wise streamlining process carried out in cooperation with the workers, it will be possible to save the Teva factory in Yerushalayim and reduce overall layoffs at Teva plants throughout the country.”