Politics Doug Jones: Don’t Expect Me to Always Side With Senate Democrats
Politics 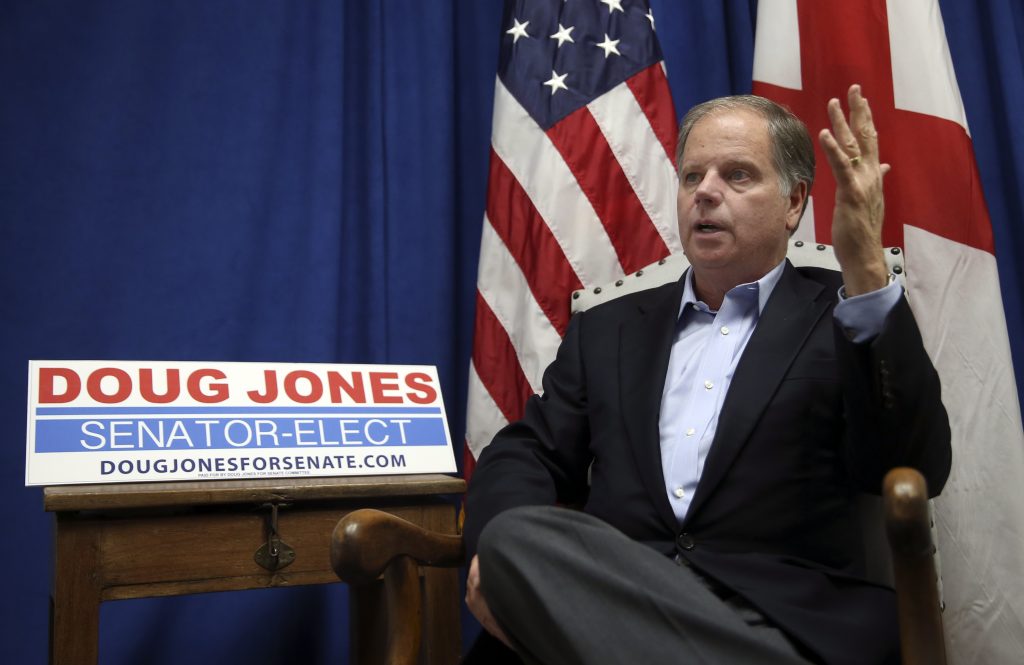 Democrat Doug Jones, who won election to the Senate from staunchly Republican Alabama, insisted to both parties in politically divided Washington Sunday that he’ll leave “all the options on the table” when it comes to his votes next year on issues from immigration to infrastructure.

“I’m going to consider anything,” said Jones, explaining that he doesn’t plan on labeling himself a progressive or a conservative Democrat but a “Doug Jones Democrat.”

In an early sign, Jones reiterated that he would oppose spending money to build a wall on the U.S.-Mexico border, as President Donald Trump insists upon, and expressed concern that a sweeping GOP tax cut proposal that was on track for approval this week was being “plopped into a vote too quickly.” At the same time, Jones said people should not “expect me to vote solidly for Republicans or Democrats.”

The 63-year-old former U.S. attorney made clear he’s ready to move forward even though his Republican opponent in last Tuesday’s special election, Roy Moore, has yet to concede the race. “Alabama has spoken,” Jones said. “I will be ready to go regardless of whether he concedes or not.”

Jones’ election will cut the Republicans’ Senate majority to 51-49, when he takes office in early January.

White House legislative director Marc Short said the administration was eager to see whether Jones will “actually work to represent the people of Alabama” in a bipartisan way or side with liberal Democrats. Trump has also urged Moore to concede the race.

“We hope that frankly Doug Jones will help us change the climate here in Washington,” Short said. During the campaign, Mr. Trump chastised Jones as a liberal who would be “terrible” on crime and border security, and a “puppet” for Senate congressional leaders.

But on Sunday, Jones downplayed Mr. Trump’s earlier criticism as statements made “in the heat of a campaign,” and described the president’s congratulatory call after the election as “very gracious.”

“I’m going to be looking at issues on both sides,” he said.

Jones defeated Moore, by 20,000 votes, or 1.5 percent, to become the first Democrat elected to represent Alabama in the Senate in a quarter-century. He was lifted by African-American voters, independents and moderate Republicans who turned out to reject Moore.

Making his first Sunday talk show appearances since his win, Jones said he looked forward to meeting with Mr. Trump and believed his own mandate was to avoid rigid partisan positions in favor of compromise and “getting things done,” even if meant coming across as “pure pie-in-the-sky” and sometimes disappointing some of his core constituents.

But siding with congressional Democrats, Jones made clear he wants to help devise safeguards for immigrants brought to the country illegally as children, but without funding for a border wall. The Obama administration program which provided those protections, the Deferred Action on Childhood Arrivals program, is set to expire in March.

“I have said before that I opposed the building of a wall. I think that’s an expense that the taxpayers just don’t have to incur because I do think you can increase border security without having to go to the incredible expense of building that wall,” Jones said. Referring to a broader immigration overhaul that would likely involve questions of a pathway to citizenship for immigrants living here illegally, he said: “I think it’s going to be very complicated. …I’m not as sure it’s as important as health care and some other things right now.”

He pointed to fixing roads and bridges, a priority of Mr. Trump’s, as a bipartisan issue that could benefit Alabama. “Let’s get on with the real issues that are facing people of this country right now,” Jones said.

Jones appeared on Fox News and CNN. Short was on NBC.