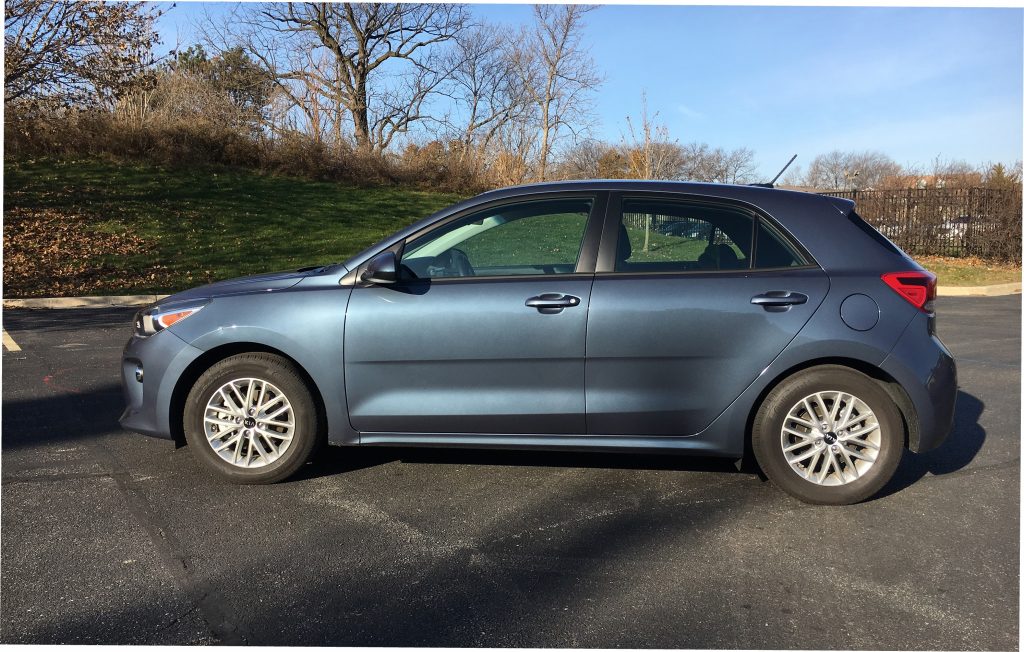 There aren’t many new cars in the $15,000 range anymore, largely because there aren’t many subcompact budget cars being sold. Though redesigned for 2018, the Kia Rio subcompact hatch is a throwback to the days when owning a car was a rite of passage into adulthood. It didn’t have to be flashy or large, it just had to be functional.

There’s an understated charm in such modest simplicity. The fourth-generation Rio competently does the job of getting here and there in a smooth, efficient ride that Kia is expecting will be an IIHS Top Safety Pick. It is a good starter car for a teenager and averaging 32 mpg combined, it makes for a good budget commuter. It’s a car you need so you can spend money on the stuff you want.

Outwardly, changes to the body are subtle. Built on a new platform, the Rio has been slightly stretched and lowered with shorter overhangs; the grille is a tad broader, the fog lights stand out more at the edges of the fascia, and the headlights wrap around the sides to make it look more flowing.

The inside was roomy enough to haul three people and a weekend of tween athletic gear —— with no problem except for the nearby smell of my daughter’s hockey pads. Clever storage areas for the smartphone and bottle holders in the door maximize interior space. It could be a college road trip special, but there’s no reason to stuff that fifth seat with a fifth passenger, even with the extra 1.5 cubic feet of passenger room in the redesign.

Powering the front wheels is a revised 1.6-liter four-cylinder engine with a six-speed transmission. Horsepower drops from 138 to 130 but is made up for with an additional mpg, to 28 mpg city and 37 mpg highway. The six-speed lets the engine rev into the 5,000 rpm range, creating a fun wail that reminded me of budget cars of yore, except this one could take the beating. Despite the horsepower drop, it has more punch than other similar cars and is more refined. At highway speeds, it’s not unreasonably loud and it gives the driver an overall feeling of having gotten the best end of this deal.

The value proposition is challenged when it comes to the top-of-the-line EX trim in the test vehicle. It’s $4,500 more than the base LX hatch ($14,200), which is an upcharge of over 30 percent for what is essentially a technology upgrade with an automatic transmission and some nicer seats. The EX comes with a 7-inch touch screen, voice recognition system and Android Auto/Apple CarPlay. There’s also autonomous emergency braking and forward collision system exclusive to EX, and the likely source of that targeted IIHS Top Safety Pick.

In the budget car space, which has shrunk but will never disappear, the redesigned Rio is one of the more refined rides.