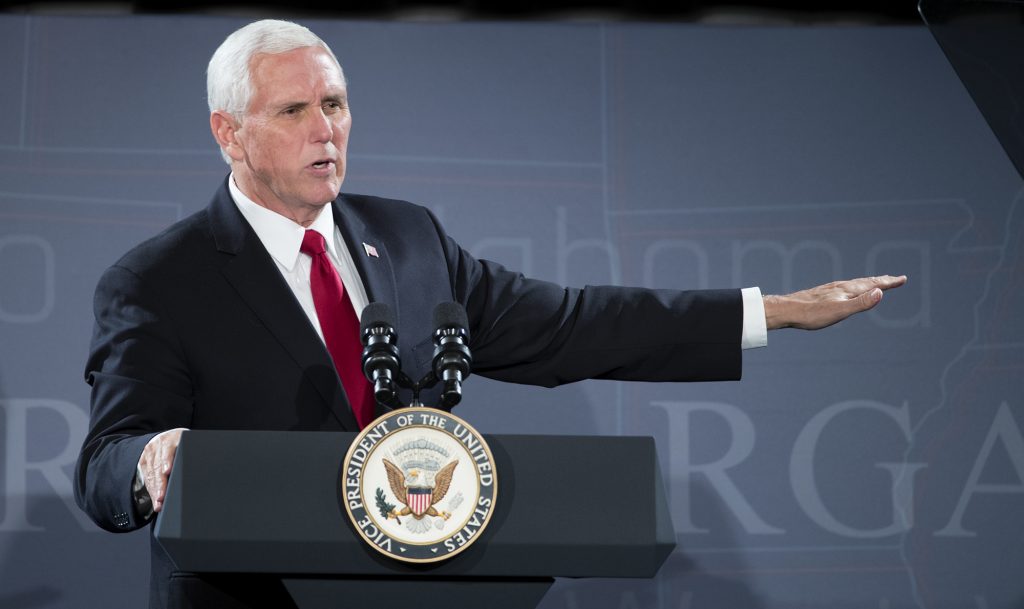 The visit to Israel by U.S. Vice President Mike Pence will likely be postponed by several days, Channel 10 reported Thursday. Pence had been set to arrive in Israel on Sunday, but the visit will likely take place next Wednesday, the report said, quoting White House sources. The reason for the delay is to ensure that Pence remains in Washington for final Senate approval of President Trump’s tax plan, with Pence to cast the decisive vote if the Senate vote ends in a tie. The vote is set to take place early next week.

Meanwhile, it appeared that Pence’s options on the visit were becoming more limited. In the wake of the declaration by the Palestinian Authority that it planned to avoid meeting with Pence, the United Arab List also declared that it would boycott the vice president’s visit in the wake of the announcement by President Donald Trump that the United States now recognizes Yerushalayim as Israel’s capital.

In a statement, UAL head MK Ayman Oudeh said that members of the party would walk out when Pence comes to speak in the Knesset “in order to deliver a message that there are many citizens here opposed to Trump’s recognition announcement, and to emphasize that the U.S. has lost its status as the sole custodian of negotiations. The entire world will recognize Jerusalem as the capital of Israel as soon as Israel recognizes eastern Jerusalem as the capital of the Palestinian state.”

The Palestinian Authority last week announced that Pence could go to Yerushalayim, but he was “not welcome” in Ramallah. Fatah senior official Jibril Rajoub told Reuters that a meeting between Pence and PA chief Mahmoud Abbas would not be “productive” for Palestinians. In response, Washington sent a message to Abbas that it expected Ramallah to meet with Pence when he arrives in the region, but speaking at an Islamic conference in Turkey on Wednesday, Abbas said that Trump “gave the Arabs a slap in the face, the biggest of the century,” for his announcement that the U.S. recognizes Yerushalayim as Israel’s capital.

Abbas warned that the recognition announcement would empower radical Islamist groups. “Al-Quds [the Arabic term for Yerushalayim] was and will always be the capital of the Palestinian state, the jewel in the Palestinian crown.” The United States, he added, “will no longer be involved in the diplomatic process. This decision is a great crime and a major violation of international law.” In response to that speech, the Jerusalem Post quoted a White House source as saying that the U.S. was “disappointed” in Abbas’s speech. “This rhetoric, which has prevented peace for years, is not surprising, as we anticipated reactions like this,” the source said. “We will remain hard at work, putting together our plan, which will benefit the Israeli and Palestinian peoples.”

Pence may not even be able to visit one of Christianity’s most revered shrines. Div Judeh, custodian of the historic church, said Wednesday that he would not open the shrine for Pence. “We in the Judeh family have been responsible for the church for 850 years,” he said in a statement. “We have always fulfilled our obligations to the church without discrimination, and we have received all visitors, including heads of state and religious leaders who have asked to visit.” But Pence would be an exception, he said. “I absolutely refuse to receive the American vice president in an official manner. I will not be physically present at the visit. This is my way of protesting the American recognition of Jerusalem as Israel’s capital.” As Judeh has the keys to the church, it is not clear if Pence will be able to get inside if Judeh is not there to unlock the door.