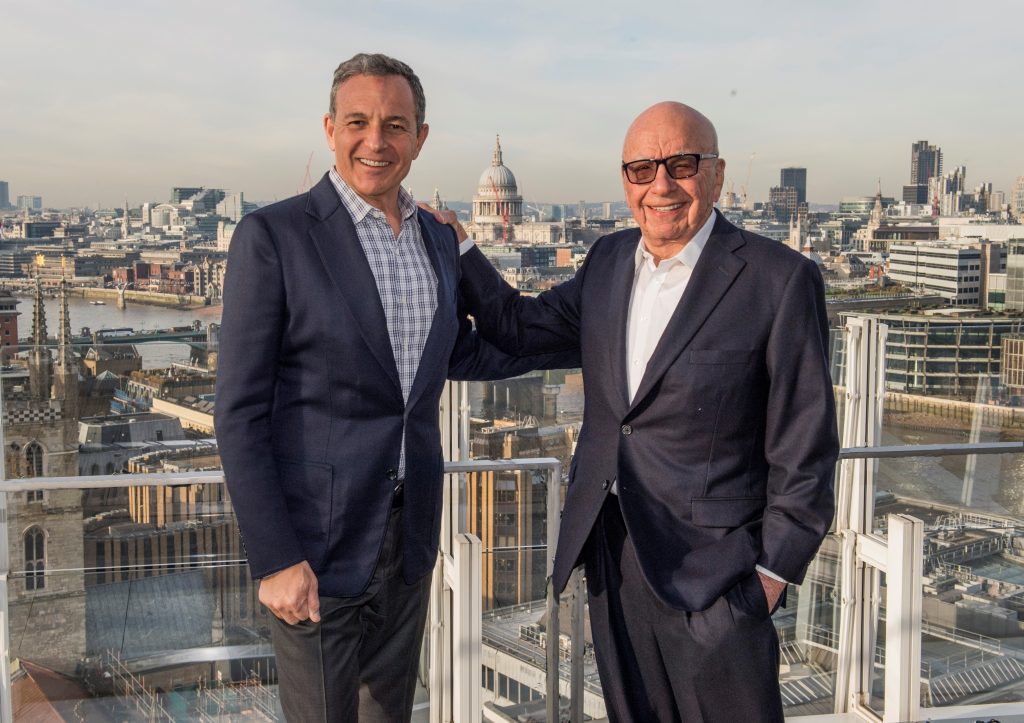 Disney is buying the Murdoch family’s Fox film and TV studios and some cable and international TV businesses for about $52.4 billion in an all-stock deal.

That Rupert Murdoch and his sons were willing to sell off much of the business that has been built up over decades came as a shock to the entertainment industry.

Murdoch, who built a global media and entertainment empire out of an inheritance from his father in Australia, said what remains of his family’s business will be able to focus on American news and sports. During a call with investors Thursday, Murdoch describes the move as a return to the company’s lean and aggressive roots.

Disney CEO Robert Iger will continue as chairman and CEO of The Walt Disney Co. through the end of 2021. Disney said Thursday that it anticipates the acquisition providing at least $2 billion in cost savings. Both companies’ boards have approved the deal. It still needs approval from Disney and 21st Century Fox shareholders.

Before the buyout, 21st Century Fox will separate some Fox stations into a newly listed company that will be spun off to its shareholders. It will also include the company’s studio lot in Los Angeles.

Fox is also selling to Disney its substantial overseas operations. Disney will get at least a 39 percent stake in European satellite-TV and broadcaster Sky. Fox is hoping to acquire the remainder of Sky before the deal closes, so that it could give Disney full control after the sale. Disney is also acquiring Star India, a major media company with dozens of sports and entertainment channels.

Not everyone thinks this is a good bet by Disney, though. Rich Greenfield, a longtime Disney critic, thinks the deal is a bad idea that ties Disney to older broadcasting systems rather than helping it look toward the future.

He also notes that regulators may not like the idea of combining two major film studios. The Justice Department surprised many in the industry and on Wall Street when it sued to block another media megamerger, AT&T’s acquisition of Time Warner, in November.

Rupert Murdoch built his empire by buying a string of papers in Australia, the U.K. and the U.S., building an influential platform for his views. He expanded into TV and film, launching the Fox network and Fox News and changing the face of American news and entertainment.

He has ostensibly already handed the reins over to a new generation at Fox. His son James is CEO, while his other son, Lachlan, like Rupert, has the title of executive chairman.

The Murdoch empire has already been divided. After a phone-hacking newspaper scandal in the U.K., News Corp. was split off into a separate company for the publishing and newspaper businesses, which include the New York Post, The Wall Street Journal, The Sun and The Times in the U.K., and book publisher HarperCollins. Now, Fox is slimming down, with the bulk of the company going to Disney.

Fox will be left with the live events, news and sports that are key parts of the traditional TV bundle. There is speculation that the Murdochs would want to recombine the slimmed-down Fox with News Corp., though Murdoch told investors Thursday, “We haven’t thought about combining with News Corp.”