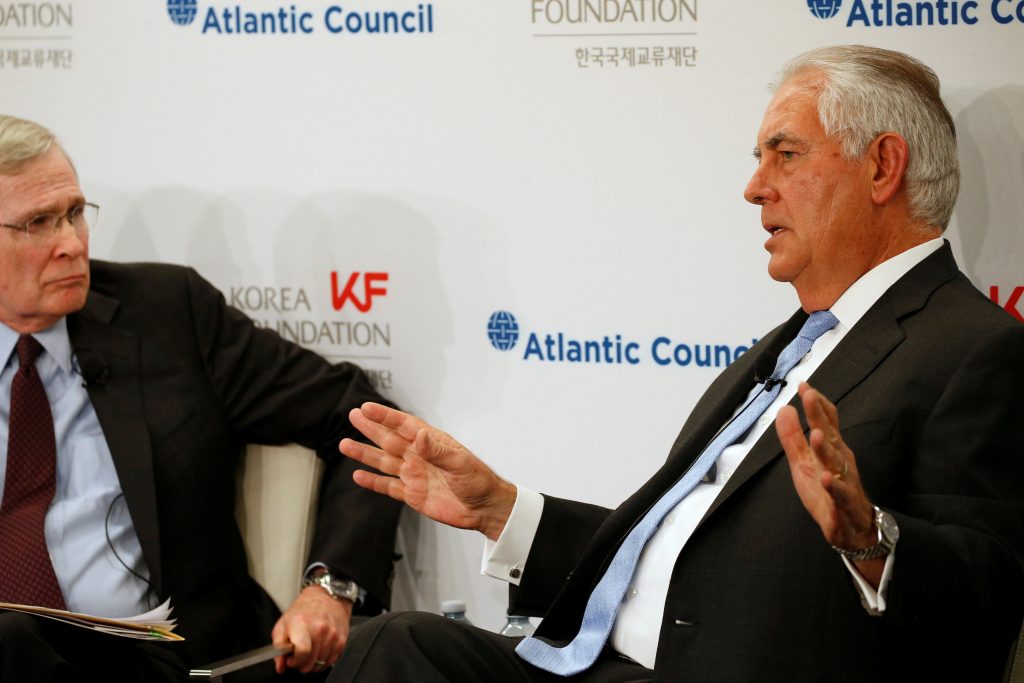 U.S. Secretary of State Rex Tillerson offered to begin direct talks with North Korea without pre-conditions, backing away from a key U.S. demand that Pyongyang must first accept that giving up its nuclear arsenal would be part of any negotiations.

The White House later issued an ambiguous statement that left unclear whether President Donald Trump – who has said Tillerson was wasting his time pursuing dialogue with North Korea – had given his approval for the speech.

China hopes the United States and North Korea can meet each other halfway and take meaningful steps on dialogue and contact, he told reporters.

Kim said on Tuesday the scientists and workers would continue manufacturing more of the “latest weapons and equipment” to “bolster up the nuclear force in quality and quantity,” the KCNA news agency said.

While reiterating Washington’s long-standing position that it cannot tolerate a nuclear-armed North Korea, Tillerson said the United States was “ready to talk any time they’re ready to talk,” but there would first have to be a “period of quiet” without nuclear and missile tests.

“Time will tell what was the impact of our discussions, but I think we have left the door ajar and I fervently hope that the door to a negotiated solution will now be opened wide,” Feltman told reporters after briefing the U.N. Security Council on Tuesday.

Not everyone is ready for talks.

Japan has advocated a strategy of pressuring North Korea through sanctions to give up its nuclear weapons. Tokyo and Washington are in “100 percent” agreement on that stance, Chief Cabinet Secretary Yoshihide Suga said on Wednesday, when asked about Tillerson’s comments.

A former Japanese diplomat said that while a diplomatic solution was the “only acceptable solution,” now was not the time for talks.

“We have to see the effects of sanctions on life in North Korea,” the former diplomat, who asked not to be identified, told Reuters.

“I heard that they are having a serious impact on everyday life. Let’s wait and see. If we were to hint anything for dialogue, we’d be losing clout.”

Tillerson also disclosed the United States had been talking to China about how to secure North Korea’s nuclear weapons in the event of a collapse of the government in Pyongyang. He said Beijing had been given assurances that if U.S. forces had to cross into North Korea they would pull back across the border into the South.

Chinese spokesman Lu would not directly answer a question about those comments, but said China had always clearly told all its interlocutors on the issue that “there can be neither war nor chaos” on the Korean peninsula.

Tillerson made clear that the United States wants to resolve the North Korea standoff through peaceful diplomacy and, in terms far more tempered than Trump’s recent threats against Pyongyang, offered to hold exploratory talks.

“We can talk about the weather if you want,” he said. “We can talk about whether it’s going to be a square table or a round table. Then we can begin to lay out a map, a road map, of what we might be willing to work towards.”

Tillerson – whose influence has appeared to wane within the administration – said Trump “has encouraged our diplomatic efforts.”

Trump said on Twitter in October that Tillerson was “wasting his time trying to negotiate with Little Rocket Man,” using his derisive nickname for Kim.

North Korea, for its part, has made clear it has little interest in negotiations with the United States until it has developed the ability to hit the U.S. mainland with a nuclear-tipped missile, something most experts say it has still not proved.

Tillerson also said the United States was working to tighten enforcement of international sanctions against North Korea, especially further measures that China can apply, and that Washington had a full menu of military options if such a response was needed.

Daryl Kimball, executive director of the non-partisan Arms Control Association, said Tillerson’s proposal was overdue but added, “In order to get to such talks going, the U.S. side as well as North Korea must demonstrate more restraint.”